ElasticSearch is an open-source and distributed search engine which is very much scalable and supports a good amount of enterprise Search use cases.

ElasticSearch is an open source project, under the Apache License version 2, built on top of Lucene and Java. The source code is located on GitHub, at https://github.com/elastic/elasticsearch.

Behind the ElasticSearch product is a company named Elastic. It’s website is located at https://www.elastic.co/. Elastic is the core developers of the open source project and owns the copyright for it. Additionally, the company provides training, support and a number of commercial add-ons for ElasticSearch.

In other words, ElasticSearch is free to use but there is a company that supports its development. This company also provides services and add-ons which are not free. It’s entirely up to you whether you pay anything in conjunction with using ElasticSearch or not. If you don’t, you will still have access to the full ElasticSearch product, but if you do pay money, you’ll be able to get training, support and/or nice add-ons.

Want to become a master in Elasticsearch? Enroll for Free“Elasticsearch Training”.  Demo!

Elasticsearch is a platform for distributed, RESTful search and analysis. It can scale as needed, and you can get started using it right away

ElasticSearch is a Java application built for Java 7 or higher. Therefore, the first step in setting up ElasticSearch is to ensure that you have Java installed and the JAVA_HOME environment variable correctly configured.

To check that you have a compatible version of Java installed, open up a terminal window and type java-version. The output should look something like this:

Running java -version in a console where Java 8 is installed.

Once you have made sure that you have Java 7 or higher installed and the Java executable in your path, ensure that you have the JAVA_HOME environment variable configured by typing echo $JAVA_HOME into your terminal. The output should look something like this:

Verifying that the JAVA_HOME environment variable is set on a computer where it indeed is set.

If you don’t have Java installed and/or the JAVA_HOME environment variable set up fix that prior to proceeding. Java can be downloaded from https://java.com/en/download/.

Next, with Java correctly set up, you’re ready to download and install ElasticSearch. This can be done using various package managers such as the Homebrew on OS X. However, it can also be done manually by downloading from www.elastic.co.

ElasticSearch can be downloaded from https://www.elastic.co/downloads/elasticsearch. From there, grab the ZIP package for ElasticSearch and unzip it to some suitable location on your computer.

Take a look inside the unzipped folder. You should find a few text files and some directories.

Inspecting the contents of the elasticsearch folder.

As you can see from the timestamps in the console output above, it took a few seconds but ElasticSearch is now up and running. To verify this, open up a browser and make a request to https://localhost:9200. The response should be in the form of JSON, looking something like this:

Example response from ElasticSearch when making a request to it’s / endpoint.

Given that your browser can connect to https://localhost:9200 and you see a response similar to the one above, ElasticSearch is running fine. The exact response isn’t very interesting. ElasticSearch’s “/” endpoint, which is what we’ve requested, responds with some basic information about the cluster, such as which version of ElasticSearch that it’s running.

To shut down ElasticSearch, simply press CTRL+C. To start it again execute the same command as previously used.

Marvel is a monitoring and cluster management dashboard, enabling you to understand and visualize the health and status of your Elasticsearch infrastructure.

Marvel is a database monitoring tool that can show you how your ElasticSearch is feeling with a huge amount of meters and gauges.

However, there are a number of tools that can aid you beyond what generic HTTP clients provides. One such tool is Sense. Sense is a “JSON aware developer console to ElasticSearch” that offers auto completion and nice formatting of requests and responses.

These days Sense is shipped as a part of Marvel, a commercial plug-in for ElasticSearch. Marvel provides management and monitoring dashboards for an ElasticSearch cluster and, Sense.

While Marvel requires a paid for license for production use it’s free for development use. It is recommended to install it now as it’s a good tool to get to know and as Sense will make it more convenient to play with ElasticSearch. To do so, you can use the “bin/plugin” tool. From the ElasticSearch home directory, run bin/plugin -i elasticsearch/marvel/latest. The output should look something like this:

To use Marvel, you need to install two components: 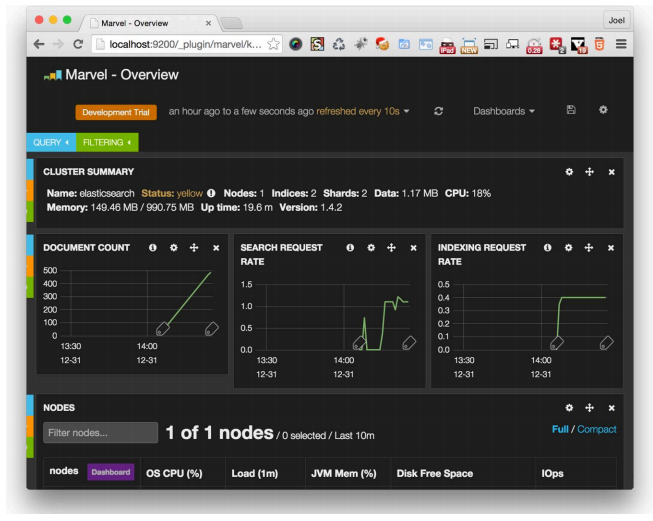 In order to access Sense, use the “Dashboards” drop down menu in the top right part of the Marvel and click on Sense. Alternatively, you can navigate directly to the Sense by directing your browser to https://localhost:9200/_plugin/marvel/sense/ 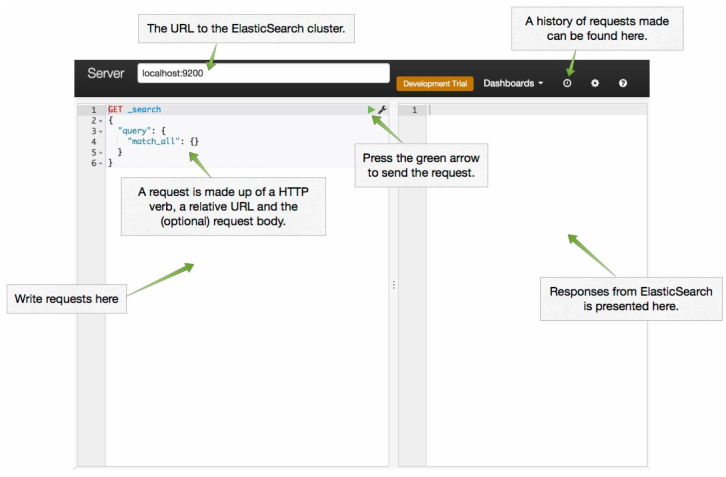