Yamuna Karumuri is a content writer at Mindmajix.com. Her passion lies in writing articles on the IT platforms including Machine learning, PowerShell, DevOps, Data Science, Artificial Intelligence, Selenium, MSBI, and so on. You can connect with her via  LinkedIn 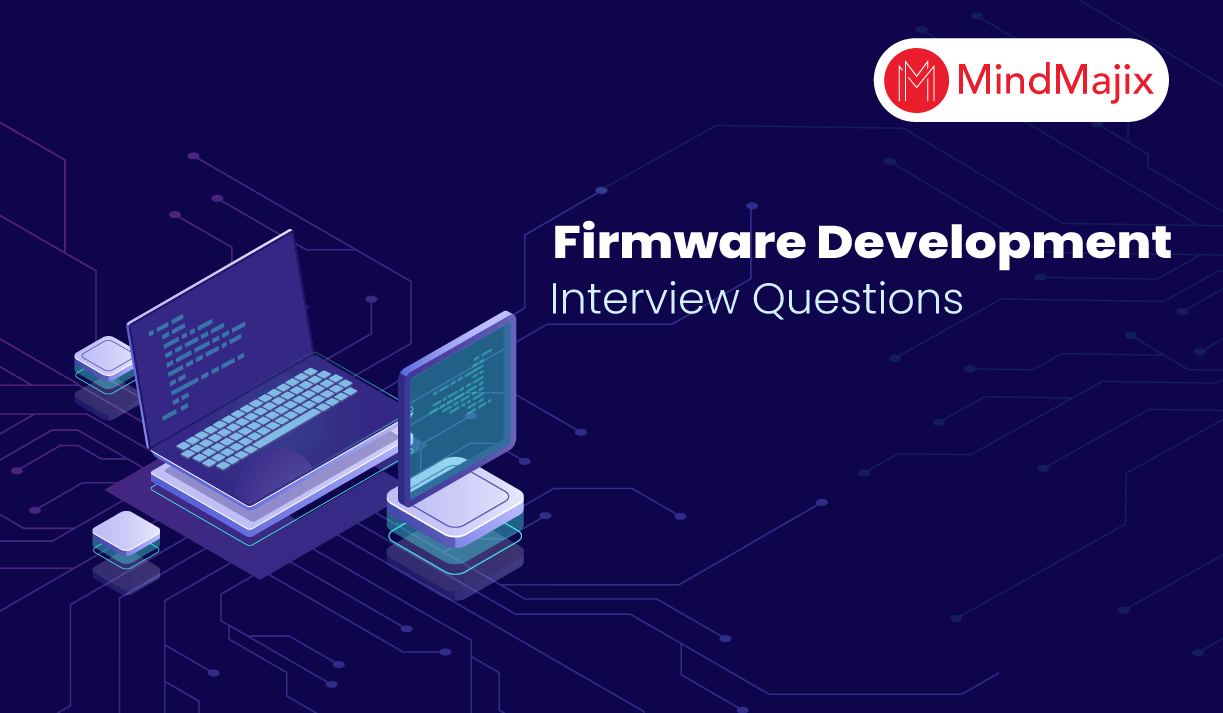 Q: What do you understand Firmware?

Ans: Firmware is basically software that is embedded on a piece of hardware categorized as Non-volatile memory. Non-volatile (NVMe) is a semiconductor technology that does not require a continuous power supply to retain the data or the coded program stored in a computing device like flash drives, cameras, remote control etc. Firmware provides a standardized operating environment for complex devices like camera, television sets etc. which does not need a continuous power supply.

Q: What is the difference between a driver and firmware?

Q: What is the firmware of a computer?

Ans: Firmware is the stored data on a computer or another hardware device's read-only memory (ROM). It consists of instructions of the device’s operating procedure. Firmware such as the ROM, BIOS of any computing devices like laptop, Smartphone or personal computers may contain only elementary functions of a device. Firmware such as the program of the embedded system may be the only program that runs on the system and provides all of its functions.

Q: Is embedded software a firmware?

Ans: Embedded System usually refers to a specific instance of some hardware that's designed to be embedded into an application. Firmware is the software which is being installed during the manufacturing of the system. The name clearly suggests that it is firmly embedded in the hardware. If we consider the system is a PC, BIOS is its firmware.

Q: What language is used to write firmware?

Ans: Firmware is typically written in a low-level language (be it C or assembly) as compared to other languages. It can be easily compiled and assembled into machine code and placed in a known position on the storage, where the hardware, during its startup process can read from the location and initiate that code.

Q: What are the common examples of firmware?

Ans: Firmware is a set of instructions that are running on our routers, DVD Player, Smartphones etc. More sophisticated firmware runs on a computer that requires a continuous power supply. BIOS are one such firmware. Another example is a microcontroller, a part of the microprocessor that instructs the microprocessor what actions to take.

Q: What is the firmware of microcontroller?

Ans: Firmware is a program that is installed in any microcontroller based system, usually stored in flash memory. The bootloader is a small program which facilitates the programming of these flash memories.

Q: What is embedded software design?

Ans: Embedded software is written to control machines or devices that are not perceived as computers. It is being designed for the particular hardware that is operated upon and has time and memory constraints. These machines don’t need a power supply and can be switched on and off randomly. Instructions installed in it cannot be modified and for which the data doesn’t need to be saved.

Q: What do we know by embedded firmware design?

Ans: Embedded firmware is the memory chip which stores specialized instructions running on an embedded device to manage its functions. Firmware in any embedded system provides the same purpose as ROM but can be updated more easily as compared to firmware on non-volatile equipment. Updations are essential for better adaptability to conditions or interconnecting with additional and modern equipment.

Q: Which programming language is used for microcontrollers?

Q: What is firmware in an operating system?

Q: What do we mean by a firmware update?

Ans: Most of the modern-day gears and other state of art appliances, that are being invented for use nowadays is more or less the computer, be it an audio or video device. In these devices, the manufacturer makes improvements to the firmware that operates the device. These improvements are released as firmware updates and are generally updated through the internet.

Q: What is an embedded language? Which programming language is used in embedded systems?

Ans: A programming language is a language that has been used for coding in the firmware application. Examples of embedded languages are VBA for Microsoft applications and various other versions of LISP in programs such as Emacs & AutoCAD. C remains the most widely used and is being accepted in the embedded programming language, with compilers available for almost every microprocessor, microcontroller and processor core on the market. However, this language wasn’t designed or intended for making firmware.

Ans: In general, Real-Time Systems are specially designed computers that are supposed to monitor, respond to, or to control an external environment, which is connected to the computer through the sensors, actuators, and some other I/O interfaces. These environments generally consist of physical or biological objects of any form and structure. Sometimes humans are part of the connection as an external world, but a wide range of other natural and artificial objects, as well as animals, are also possible in this system. These computer systems must meet various timing and other constraints that are imposed on it by the real-time behaviour of the external world for which it is interfaced. That’s why it is known as real-time. Another name for these systems is reactive systems; because their primary purpose is to react to signals from their environment. A real-time computer system may be a component of a larger system in which it is embedded; reasonably, such a computer component and is called as an embedded system.

Q: What is DMA? How does DMA deal with a microcontroller?

Ans: Direct Memory Access (DMA) is a feature provided by some computer bus architectures which permits data to be sent directly from an external device (such as a disk drive) to the memory on the computer's motherboard.

Q: Can you define interrupt latency in brief?

Q: What do you mean by Watchdog Timer?

Ans: Watchdog timer (WDT) is hardware that automatically initiates a system reset if the main program neglects to service it. It is often used to reset an embedded device that hangs because of a software or hardware malfunction.

Q: What do you mean semaphore? What are the types of semaphore?

Ans: Semaphore - An abstract data store which is used to control the resource accesses across the different threads of execution or across different processes. There are basically two types of semaphores:
• Binary semaphore which can take only 0, 1 values. (Used when there is contention for a single resource entity).
• Counting semaphore which can take incremental values to a certain limit (used when a number of resources is limited).

Q: What does a firmware engineer do?

Ans: Firmware is the programmable content in electronic hardware devices, such as remote controls, mobile phones and medical devices that provide directions to the device on how to operate. Firmware engineers create and execute these instructions, called algorithms, which enable the hardware to function properly.