Data can be passed out of or into a loop through a tunnel. Tunnels feed data into and out of structures. The tunnel appears as a solid block on the border of the loop. The block is the color of the data type wired to the tunnel. Data passes out of a loop after the loop terminates. When a tunnel passes data into a loop, the loop executes only after data arrives at the tunnel. In Figure 4.9, the iteration terminal is connected to a tunnel. The value in the tunnel does not pass to the Iteration Number indicator until the While Loop has finished execution. Only the last value of the iteration terminal displays in the Iteration Number indicator. 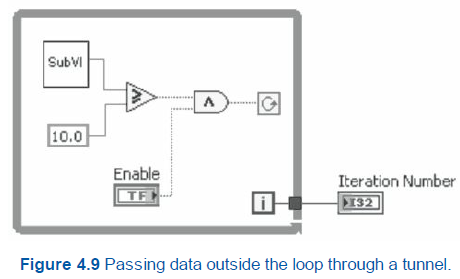 Terminals Inside Or Outside Loops