Are you a developer or a data scientist, and searching for the latest technology to collect data? Well, If so, Hive and Impala might be something that you should consider. Hive is a data warehouse software project, which can help you in collecting data. Similarly, Impala is a parallel processing query search engine which is used to handle huge data.

If you want to know more about them, then have a look below:-

What are Hive and Impala?

Hive as related to its usage runs SQL like the queries. These queries are called as HQL or the Hive Query Language which further gets internally a conversion to MapReduce jobs. One can easily skip through the traditional approach of writing MapReduce programs which can be complex at times, just by the right usage of Hive. Data Definition Language, Data Manipulation Language, User Defined language, are all supported by Hive.

On the other hand, when we look for Impala, it’s a software tool which is known as a query engine. Its software tool has been licensed by Apache and it runs on the platform of open-source Apache Hadoop big data analytics.

One can use Impala for analysing and processing of the stored data within the database of Hadoop. Impala is also called as Massive Parallel processing (MPP), SQL which uses Apache Hadoop to run. It supports databases like HDFS Apache, HBase storage and Amazon S3.

Talking about its performance, it is comparatively better than the other SQL engines. Although the latency of this software tool is low and neither is it based upon the principle of MapReduce.

As on today, Hadoop uses both Impala and Apache Hive as its key parts for storing, analysing and processing of the data.

Finally, who could use them?

How they process data: 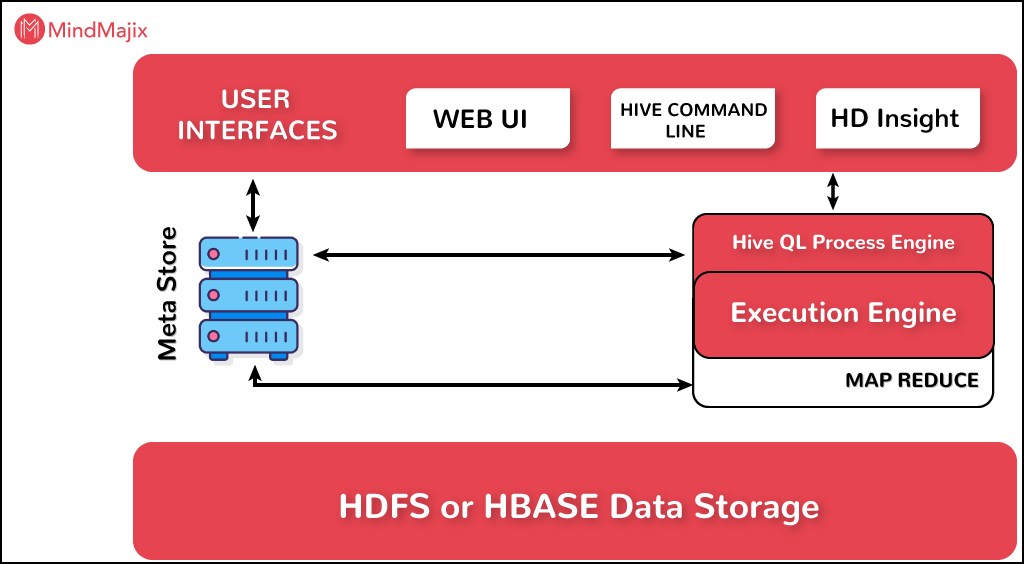 The person using Hive can limit the accessibility of the query resources. For example, who can use the query resource, and how much they can make the use of the Hive; moreover, even the speed of Hive response can be managed. Therefore, this is how it could manage the data, and reduce the workload. Through this parallel query execution can be improved and therefore, query performance can be improved.

However, when it comes to the Impala, it splits the task into different segments, these segments are assigned to the different microprocessors and therefore,  the execution of tasks is done faster.

Guide for users to initiate Hive and Impala start:

User can start Impala with the command line by using the following code:-

Moreover, to start the Hive, users must download the required software on their PCs.

Thereafter, write the following code in your command line.

However, for starting Hive on Cloudera, one needs to get the setup of cloudera CDH3. Setting up any software is quite easy. You can simply visit any youtube link to understand how to set it up. Now as you have downloaded it, you would find a button mentioning play Virtual Machine. After clicking on it, you would be redirected to a login page. Login with the user id, Cloudera, and use the login id, i.e. Cloudera as the password. Now open the command line on your pc or laptop. And run the following code:-

Now enter into the Hive shell by the command, sudo hive.

Now you can start to run your hive queries. 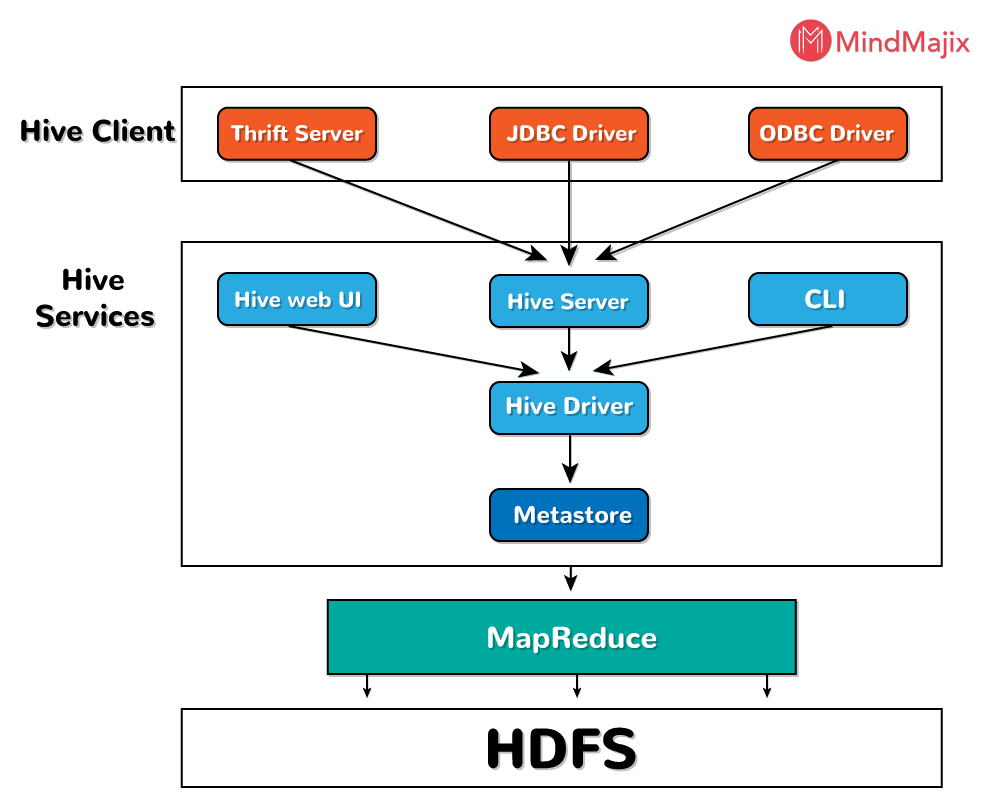 Hive comprises several components, one of them is the user interface. Hive is such software with which one can link the interactional channel between HDFS and user. Hive supports Hive Web UI, which is a user interface and is very efficient.

Now, there is a meta store, when there arises a task, the drivers check the query and syntax with the query compiler. The main function of the query compiler is to parse the query. Thereafter the compiler presents a request to metastore for metadata, which when approved the metadata is sent.

Then there is this HiveQL process Engine which is more or less similar to the SQL. In other words, it is a replacement of the MapReduce program.

The architecture of Impala is very simple, unlike Hive. Impala comprises of three following main components:- 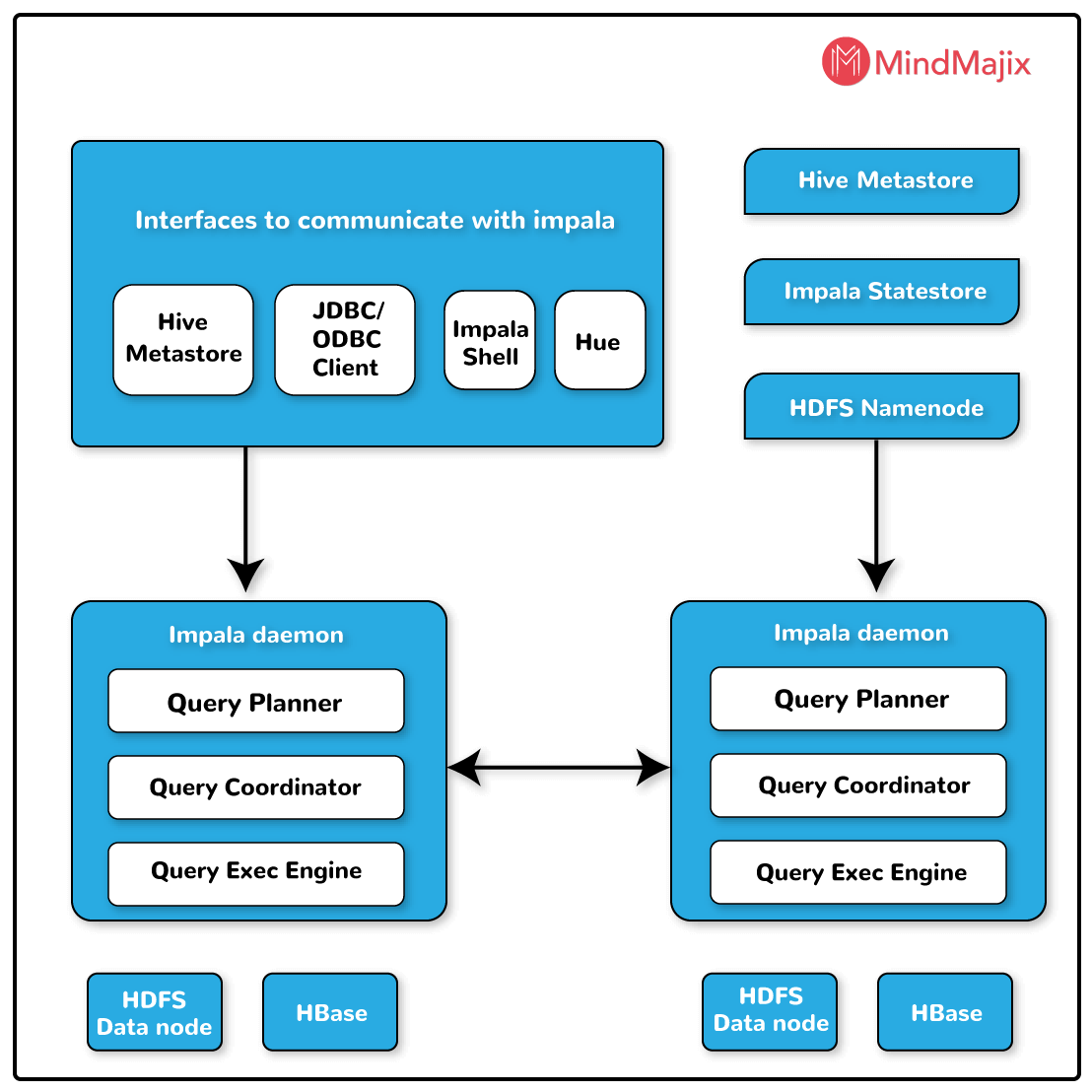 The first part, takes the queries from the hue browser, impala-shell etc. thereafter it processes the tasks and the queries which were sent to them. Therefore, it can be considered that this is the part where the operation heads start. Now the operation continues to the second part, i.e. the Impala state store. It is responsible for regulating the health of  Impalads.

Furthermore, the operation continues to the final part, i.e. the Impala metadata or meta store. It uses the traditional way of storing the data, i.e. table definitions, by using MySQL and PostgreSQL. The primary details like columns

So, now we can wrap up the whole article on one point that Impala is more efficient when it comes to handling and processing data. This is the era of data; from the marketing companies to IT companies all are trying to compete to have a better organization of data. Moreover, the one who gets it done becomes the king of the market.