Dart is a C-style object-oriented, class-defined programming language. Dart simplifies the process of developing web applications, Android applications, and desktop applications. Dart has a bright future in the mobile application development space. Dart is listed seventh on Stack Overflow's list of the most popular technologies for 2022, just below Julia. MindMajix has created a Dart interview questions and answers blog to assist you in preparing for your interview.

Dart is an object-oriented, class-defined programming language with C-style syntax. Dart makes it simple to create web applications, Android apps, and desktop applications. Dart has a promising future in the field of mobile app development. So stick with this technology for a while. Dart is ranked 7th behind Julia on Stack Overflow's list of the most popular technologies in 2021. MindMajix has developed Dart interview questions and answers blog to simplify your interview preparation.

Below are the most basic Dart interview questions with solutions, which help you clear your interview.

Dart is used in association with Flutter to create mobile apps. This is one of Dart's most popular applications nowadays. The fact that Dart and Flutter are cross-platform is a significant advantage. It means that instead of creating two different apps for iPhone and Android, you can create an app with simply one codebase. React Native, a cross-platform implementation of React is Flutter's closest competition.

3. What are the Features of Dart?

4. What are the ways to execute a Dart Program?

The following are the methods for executing a Dart Program:

The Dart programming language is type-safe, and it employs static type checking to ensure that a variable's value always corresponds to the fixed type of the variable. This is sometimes referred to as "sound typing." Even though types are required, type annotations are unnecessary due to type inference. Dart's typing system is also versatile, allowing for the usage of a dynamic kind mixed with runtime checks, which can be beneficial for experimentation or for code that requires a lot of emotional behavior.

6. How will Google Dart get Popular?

Google is working hard to get Dart embraced by web developers and the community and provide support, tools, and an execution environment.

7. What are the data types in the Dart language?

8. What is type-checking in Dart?

Type checking in Dart is the process of testing and enforcing the constraints of types at either compile-time (i.e., statically) or runtime (i.e., dynamically).

9. What is the use of typedef in Dart?

In Dart, Typedef is used to generate a function's user-defined identity (alias). That identity can be used in place of the process in the program code. The function's parameters are defined using typedef. It can also provide the variable with a process.

10. Does Dart have a syntax for declaring interfaces?

Interface declaration does not have a syntax in Dart. Dart considers class definitions to be interfaces. To use an interface, classes should use the implements keyword. It is required that the implementing class offer a concrete implementation of all of the implemented interface's functions.

12. Which editor is used to enable breakpoint and step-by-step debugging?

Breakpoints and step-by-step debugging are available in the WebStorm editor. At the place where the breakpoint is set, the program will crash. This capability is similar to what you'd find in a Java or C# program. From the WebStorm Editor, you may observe variables, traverse the stack, and step over and into method and function calls.

13. What is the file extension of Dart?

Dart has a file extension of. Dart.

The pub is the Dart programming language's package manager, with reusable libraries and packages for Flutter, AngularDart, and standard Dart apps. Some fundamental commands: To get dependencies, use pub get. To upgrade a dependency, use pub upgrade.

Dart can support remarks. There are different types of comments:

16. What Are The Various Types Of Operators In Dart?

There are many different types of operators in Dart:

17. Is Dart easier than JavaScript?

Dart doesn't support function overloading in any way. Only within the class where they are declared can static methods be accessed without the class name as a prefix.

19. What are various string functions in Dart?

Below are the most commonly asked Dart interview questions with answers

20. What are the core libraries in Dart?

1. Dart includes a large set of core libraries that cover a wide range of programming tasks.

2. Every Dart application has built-in types, collections, and other essential functions (dart: core)

4. Converting between multiple data representations, such as JSON and UTF-8, with encoders and decoders (dart: convert)

9. For interoperability with other code that uses a C-style interface, foreign function interfaces are used (dart:ffi)

11. HTML components and other resources for web applications that require interaction with the browser and the Document Object Model (DOM) (dart: Html)

21. What are the supplementary packages published by Dart?

Many necessary supplemental packages are available from the Dart team, including:
Characters: Characters, also known as Unicode (extended) grapheme clusters, are strings seen as sequences of user-perceived characters. The Characters class provides access to a string's feelings and a mechanism to move between them using a CharacterRange.

Intl: Intl is the most important library. It declares the Intl class, the default locale, and methods for interacting with most internationalization processes. The DateFormat, NumberFormat, and BidiFormatter classes are also defined in this package.

HTTP: This package includes a collection of high-level methods and classes for consuming HTTP resources. It's cross-platform, with mobile, desktop, and browser support. The top-level functions provide the most convenient access to this library.

Crypto: A collection of cryptographic hashing methods written entirely in Dart in a single input digest. It can Invoke the convert method on the sha1, sha256, or md5 objects to hash a list of bytes.

Markdown: Markdown library is a Dart-based portable. On both the client and the server, it can parse Markdown into HTML. A few Markdown extensions are supported and provided in the initial Perl Markdown implementation. The ones that CommonMark supports are activated by default.

22. What are the platforms used in Dart?

Dart's compiler technology allows you to run code in a variety of ways, including: 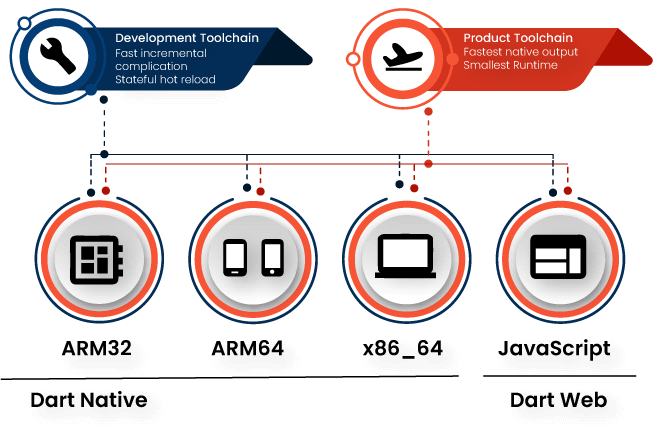 A Dart runtime is required to execute code, regardless of which platform you use or how you create it. This runtime handles the following essential tasks:

The Dart runtime is included automatically inside self-contained executables on native platforms and is part of the Dart VM provided by the dart run command.

24. What is the set of writing rules defined by syntax?

A collection of rules for writing programs is defined by syntax. Every language specification has its own set of syntax rules. A Dart program is developed from the following:

25. What is Lambda Function?

26. What are Getters and Setters?

Setter method
It's used to put data into a variable that the getter method has returned. A default setter function exists for all classes, but it can be explicitly overridden. Using the set keyword, the setter method can be defined as:

27. What Is Method Overriding In Dart?

28. What is a constructor in Dart?

When an object is created in a program, constructors are used to initialize it. However, the default function Object() { [native code] } will not be built and will be disregarded if you do so. Dart constructors have the same name as the class and no return type.

29. What is polymorphism in Dart?

Dart supports polymorphism. Polymorphism allows a group of objects to share the same interface yet have various implementations. Let's add a new concrete class called Plane to the mix. You can use polymorphism to create Blimp and Plane and apply them to the Aircraft variable. You can use their shared attributes because they are both descendants of Aircraft. Each object instance has its own set of class properties and instance values and output that is exclusive to each object's class instance.

In Dart, the last keyword defines immutable constants or objects. The main difference between the final and const keywords is that absolute is a runtime constant, which means its value can be assigned at runtime rather than at compile-time like the const keyword. 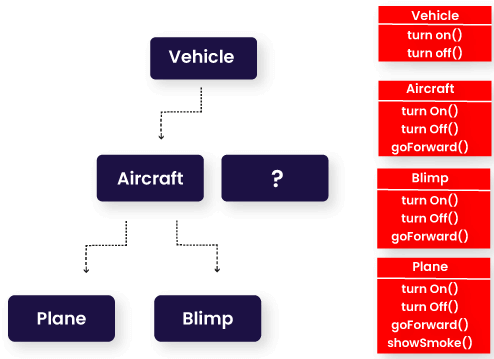 If you want to call many methods on the same object, you can avoid repeating the same target.

32. What is encapsulation in Dart?

Encapsulation is a technique for hiding property or method while still allowing access to it within the scope of the function. Unlike other object-oriented programming languages, Dart encapsulates data at the library level rather than the class level.

33. What is an optional parameter in Dart?

Streams are a type of data that is delivered asynchronously. User-generated events and data read from files are both included in data sequences. The Stream API provides two methods for processing streams: await for and listen(). Streams allow you to react to mistakes. Single subscription and broadcast streaming are the two types of streams available.

35. What is Null -aware operator in Dart?

36. What are the types of Inheritance in Dart?

37. What are the Snapshots in Dart?

The Dart relies heavily on snapshots. Snapshots are files that include objects and other runtime information.
Script snapshots
Snapshot files can be created from Dart programs. All of the program code and dependencies are prepared and ready to run in these folders. This enables quick start-ups.
Full snapshots
The Dart core libraries can be compiled into a snapshot file, allowing them to be loaded quickly. The core libraries are prebuilt snapshots that are loaded at runtime in most standard distributions of the main Dart
Object snapshots
Dart is an asynchronous programming language. For concurrency, it takes advantage of isolates. Because these are message-passing workers, a mechanism to serialize a message is required. This is accomplished by creating a snapshot from a particular object, which is then passed to another isolate for deserialization.

Now that you have the Dart interview questions to prepare for your next possible job. Examine the questions mentioned above and try to learn and understand the answers to the best of your abilities to land a well-paying job.