Do you dream of becoming a software engineer or, more particularly, a Node JS Developer? Are you going to appear for the interview soon? Does the thought of Express JS Interview Questions bother you? Then take a moment and relax! In this article, we will provide you with Express JS Interview Questions having a high probability of getting asked. Make sure to check them out at least once before your interview.

Express JS is a flexible and back-end web application Node JS framework with a powerful set of web and mobile application features. It was released as open-source software licensed under MIT in 2010. We can design single-page, multi-page, and hybrid web applications as well as APIs with the Express JS framework. It is built over Node JS, helping manage routes and servers. And it has been conferred the title of standard server framework for Node JS. It provides several HTTP utility methods to the user for creating APIs and apps easily.

Have a look at the following Express JS facts before moving forward: 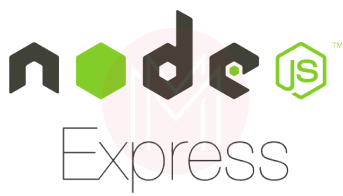 We have categorized Express JS Interview Questions - 2022 (Updated) into 3 levels they are:

1. How do you install an express application generator for scaffolding?

It will create the project "myApp" with some files. Then we install all the dependencies stated in package.json using the given command:

2. How do you install a yeoman for scaffolding?

Generators are used by yeoman for scaffolding the applications. And we can use the following command to install yeoman.

3. Mention the arguments that are available in an Express JS route handler function.

The arguments that are available in the route handler function of Express JS are given below:

4. Mention the ways of debugging on Linux as well as Windows.

Debugging on Windows can be done as follows:

And debugging on Linux can be done as follows:

Some of the many third-party middlewares that the Express JS provides are:

7. When is application-level Middleware used?

We use the application-level Middleware for binding the app object with the help of the app.use() method. It can be applied on all routes. The syntax is given below:

8. Tell us about Router-level Middleware and Built-in Middleware.

9. Mention some of the databases with which Express JS is integrated.

A myriad of NoSQL and RDBMS databases are supported by Express JS, such as:

10. What is meant by CORS in Express JS? And what are the ways by which it can be achieved?

CORS is the acronym for Cross-origin resource sharing. We can request the restricted resources from another server or domain using this mechanism. And we can do this mainly in the following three ways: 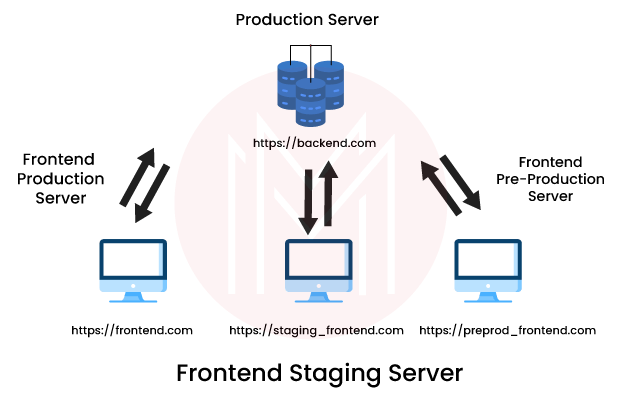 11. What ways are provided by Express JS to configure the properties?

Express JS provides us with two ways for configuring the properties, which are given below:

12. How are the properties configured with process.ENV?

The properties are configured by the given steps:

13. How are the properties configured with require.JS?

The properties are configured by the given steps:

14. How can the Express JS application be structured?

There is no specific answer to this question. The dimensions of our application and hence the concerned team define the solution in different situations. The express logic in the Routes and alternative applications can board as many files as we want in any directory structure. The given examples can be read for further inspiration:

15. How is the plain HTML rendered?

Create a new file by the name- index.js and type the following commands:

Now go to the terminal after saving it and type:

17. What are the most used HTTP methods in Express JS?

The following HTTP methods are the most used ones:

We use the “res.cookie(‘username’, ‘Flavio’)” command is used for manipulating. But it accepts a third parameter conaining various options as specified below:

19. When does a Cross-Origin resource get failed in Express JS?

A cross-Origin can fail in the following scenarios-

20. How can you use a Pug template engine inside Express?

We will first install it using the given command:

Then we will set it as following when initializing the Express app:

21. What do you mean by the sanitizing input process?

People can always enter weird things via the client-side code. They use the tools to POST things directly to our endpoints. For this, the Express provides various sanitizing methods to prevent these happenings.

22. Mention some methods for sanitizing.

23. Give an example of HTML form code allowing user to upload a file.

Consider the given example of HTML form code that allows a user to upload file.

24. What are the methods that you can call when the Formidable.File objects arise giving the information about the uploaded file?

We can call the following methods in such cases-

25. What steps will you follow to set up HTTP for Express with the help of Let's Encrypt and Certbot?

We will follow the given steps to set up HTTP:

26. What options are available in the terminal command for generating a skeleton Express JS app?

The options available are given below:

The event-loop manages the async content using a listener and queue. The main thread sends the async function to a different thread whenever it requires to be executed. Alongside, v8 is allowed to execute the main code. The event loop has different stages including pending callbacks, timers, check, poll, close callbacks, etc. with different FIFO queues. 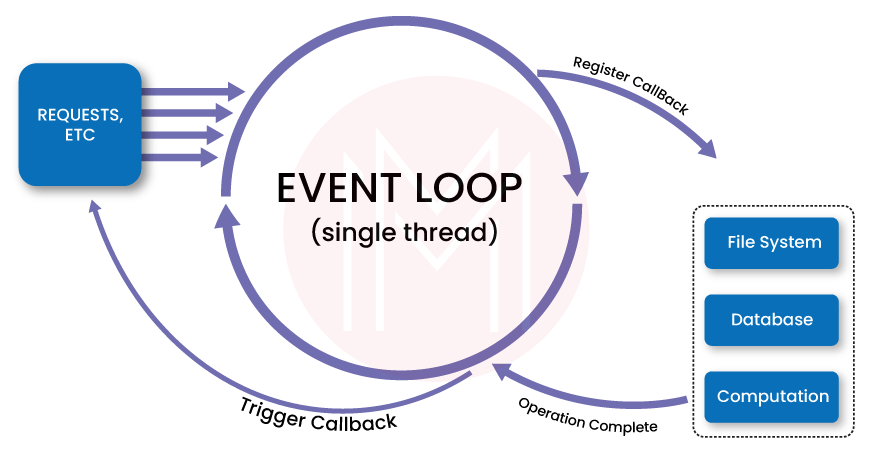 28. Why should the Express server and app be separated?

29. What is meant by an Event emitter in Node JS?

It's a class of Node JS capable of emitting events. We do this by attaching the named events emitted by the object by using the function- eventEmitter.on(). 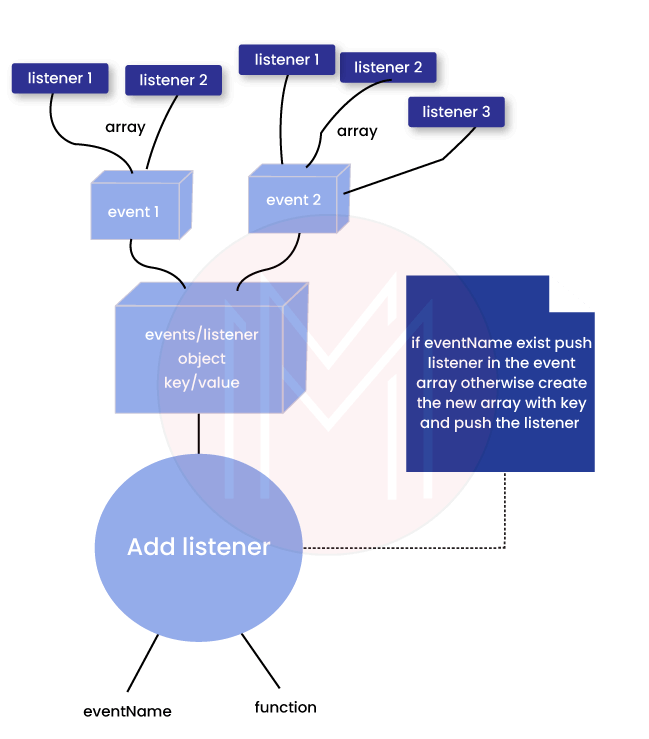 30. Differentiate between worker threads and clusters in Node JS. 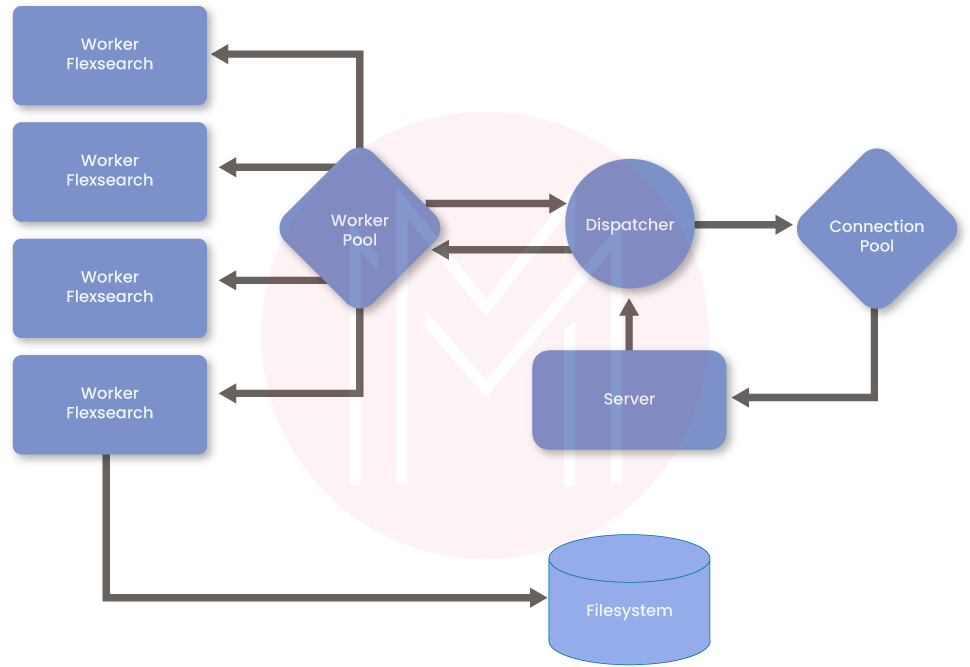 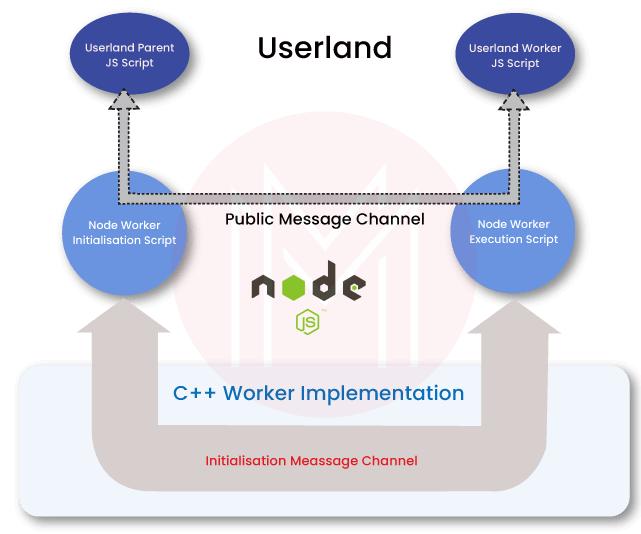 2. What are the popular alternatives to Express JS?

React JS, Meteor, Mean, Flask, Catalyst, Django, Apache Flex, and Laravel are some of the popular alternatives to Express JS.

Some distinct features of Express JS are given below-

Node JS is an open-source platform on which the JavaScript code is executed outside of a browser. It is used by several companies, including Uber, Walmart, Netflix, etc. It is a platform acting as a web server and not a programming language or framework. On the other hand, Express JS is a framework built on Node JS.

7. Which template engines are supported by Express?

All template engines following the locals, path, and callback signatures are supported by Express JS.

8. What is Middleware, and what are its functions?

Middleware is the function that we invoke before the final request process through the express routing layer. Its functions are given below:

The main types of Middleware are given below:

10. What is meant by Scaffolding in Express JS? What are the ways to achieve this?

The process of creating the structure of the application is referred to as scaffolding. The two ways of achieving it are given below:

Node JS along with Express JS, allows building a complex and high-level web application from a single line of code easily. That's why it is one of the most sought-after skills in the industry today. And this was a comprehensive list of Express JS Interview Questions that are often asked in interviews. We hope that it will be beneficial for your scheduled interview in the near future.