What is SPARQL - A Complete Tutorial Guide

SPARQL is a standard query language and protocol for the RDF datasets and Linked Open Data. It can query a wide variety of datasets, and it can effectively extract the data concealed in a heterogeneous format and saved in different sources and formats. This SPARQL tutorial discusses different components of SPARQL and makes you proficient in working with it.

SPARQL is a query language like SQL that is used to retrieve the data from the RDF datasets and Linked Open Data. It can carry out all the analytics that SQL can perform. Also, it can be utilized for semantic analysis and analyzing relationships.

SPARQL is the only semantic query language that is standard with W3C. Governments and Commercial Organizations have standardized SPARQL as the language and RDF as the data model for building industry models in the financial services industry. In this SPARQL tutorial, you will learn the topics like Data Formats, writing SPARQL queries, Datasets, Result Sets, etc.

SPARQL is a protocol and query language for accessing the RDF developed by “W3C RDF Data Access Working Group.” As the query language, SPARQL is “data-oriented” in that it queries only the information stored in the models; there is no deduction in a query language.

First, we should know what data is being queried. SPARQL queries the RDF graphs. The RDF graph is a group of triples(Jena invokes RDF graphs “models” and triples “statements” since that is what they were invoked at the point when Jena API was first developed.

It is essential to understand that it is the triples that are important, not serialization. Serialization is just the method to develop the triples down. RDF or XML is a W3C suggestion, yet it is complicated to see triples in a serialized form as there are multiple methodologies to encrypt a similar graph.

We can start with the sample data that includes RDF for various vCard descriptions of people. vCards are explained in “RFC2426”, and RDF conversion is explained in the W3C note “Representing vCard Objects in XML/RDF.” 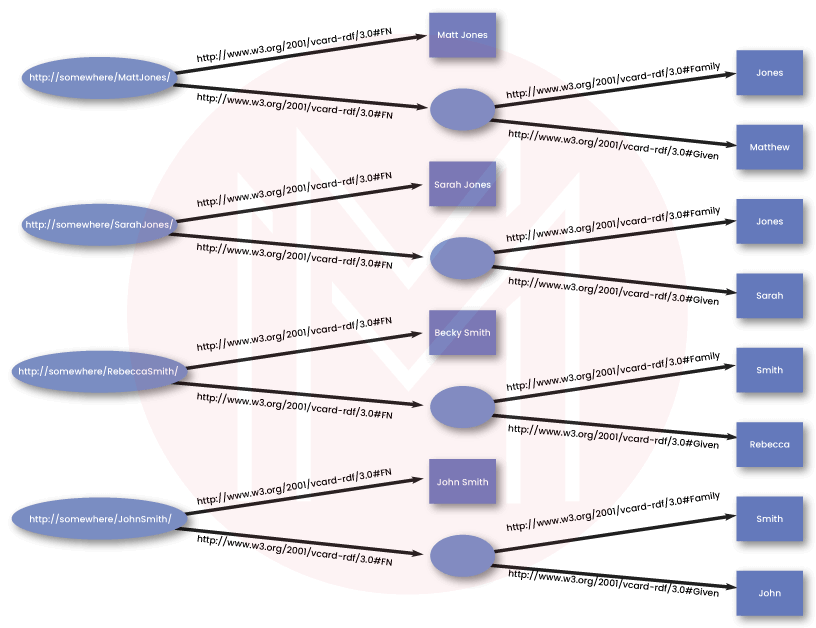 We can execute that query using the command line query application:

This works by matching the triple pattern in the ‘WHERE’ clause opposing triples in the RDF graph. The object and predicate of the triple are set values; thus, the pattern matches only triples with those values. The subject is a variable, and we don’t have restrictions on the variable. Pattern matches any triple with these objects and predicate values, comparing with solutions for “y.”

The item confined in the “<>” is a URI and the item enclosed in the “” is the plain literal. Similar to Turtle, N-triples, N3, and typed literals are developed with ^^, and we can add the language tags with “@.”

?y is a variable known as y. The “y” does not establish the part of the name; that’s why it does not show up in the

We can find one match. The query returns a match in the “x” query variable. The output displayed was acquired through one of the command line applications of ARQ.

Executing the Queries in Windows:

Executing the Queries in Linux or Unix

There is an acronym process to write long URIs through prefixes. It is a prefixing mechanism - two parts of URIs, from prefix declaration and the part after “:”  in the query, are joined together. This is not an XML qname yet utilizes the RDF rule to turn a qname into the URI by merging the parts. 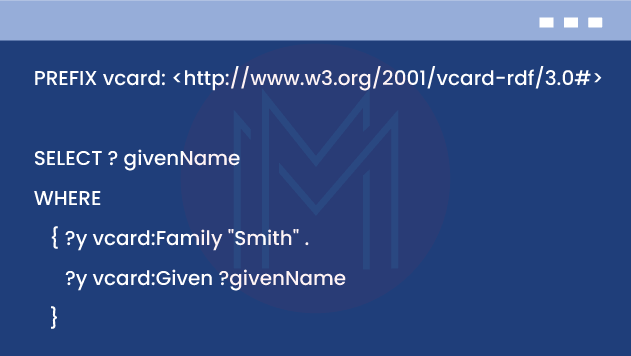 Modify the query for returning “y.”

The flags argument is optional.

RDF is the semi-structured data; thus, SPARQL can query for the data yet not to fail the query when the data is not available. Query utilises the optional part for extending the information discovered in the query solution yet to return non-optional information.

The following query fetches the person's name and age if the information is available. 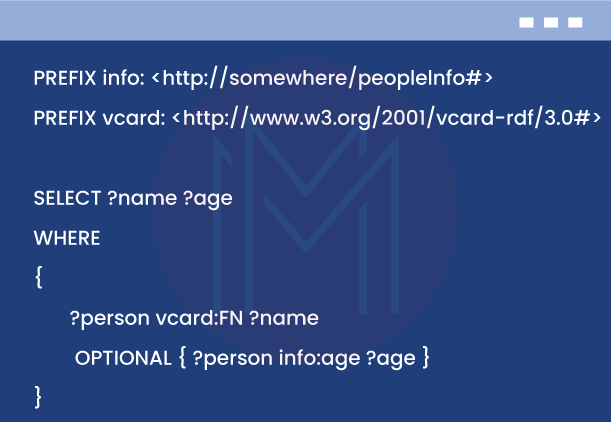 “OPTIONAL” is the binary operator that merges two graph patterns. The optional pattern is the group pattern that can include any type of SPARQL pattern. If the group matches, the solution is extended; if not, the original solution is provided. 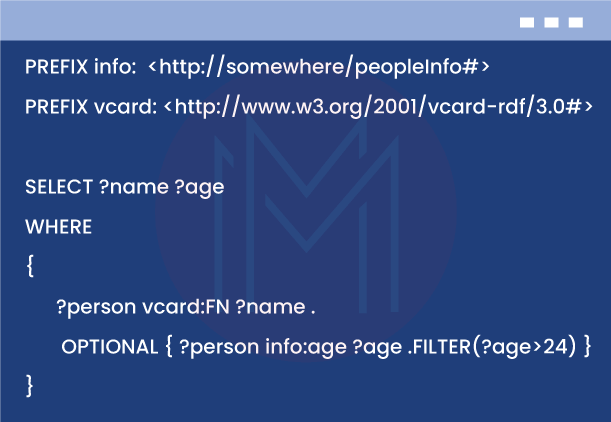 An RDF Dataset is defined as the unit that is queried by the SPARQL query. It contains the default graph and various named graphs.

Graph matching operation works on the RDF Graph.  RDF Graph becomes the default graph of the dataset, but we can modify it using the “GRAPH” keyword. 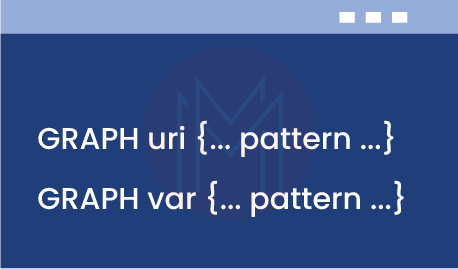 If the URI is provided, the pattern will be compared with the graph in the dataset, the “GRAPH” clause fails to match.

SPARQL has the following result forms:

Pattern Matching gives a set of solutions. We can modify this set in several ways:

SPARQL contains various concepts of SQL. For instance, in both SPARQL and SQL, we use “WHERE” clauses and “SELECT” statements for analyzing the data, along with LIMIT, OFFSET, and ORDER BY commands. Graph databases store the data in triples through the “SUBJECT-PREDICATE-OBJECT” data model.  SPARQL was developed for querying the data to analyze the data relationships better.

SPARQL is the query language we use to store and retrieve data. Like SQL, SPARQL also allows us to write the queries and execute them to fetch the data. It has all the components, clauses, and conditions that SQL has. I hope this SPARQL tutorial gives sufficient information about SPARQL. If you have any queries, let us know by commenting below.