This REST Assured tutorial is one of the most popular for testing REST APIs. We will explain how to install and set up REST Assured, create and run tests, and use some of its most useful features. We also provide the actual code samples you may copy, execute, and reuse in your test automation projects. In this article, you will also learn the REST API Testing and SOAP protocols and their benefits and features. We will also cover API testing with the REST Assured tool and the PostMan API testing tool.

What is REST Assured?

What is REST API Testing?

Why Do We Need REST Assured?

Representational State Transfer is the abbreviation for REST. REST Assured is a Java package used to test and validate Restful Web Services. It supports given, when, and then notations, which are part of behavior-driven development (BDD). It facilitates our integration with testing frameworks like TestNG and Junit.

REST assured is one of the most widely used libraries and is heavily used in most businesses' API test automation. The validation of HTTP Responses received from the server is another feature offered by the Rest assured library. Rest-Assured is a very adaptable library that may be used for testing.

Some things to know about REST Assured:

What is REST Assured?

REST assured uses highly effective matching techniques, and helping the results you expect to see is also not too difficult. Rest assured provides the methods that are used to obtain data from virtually any area of the request and response, regardless of how complex the underlying JSON structure may be. API automation testing is still very young and specializes in the testing field. However, this does not lessen its significance in the testing process.

Let us check out how the REST assured works –

What is REST API Testing?

REST API testing is a subset of software testing that ensures the correct operation of APIs. An application programming interface (API) allows two programs written in different languages to exchange data and work together. Because it allows us to test the application's business logic before the UI is complete, REST API testing is an integral part of the software development process.

There are wide application programming interface varieties available today. For the time being, we will be using REST Assured to test REST APIs. Testing APIs ensures they are both secure, stable, and functional.

Why Do We Need REST Assured?

Information related to the REST Assured Java library leads us to believe in its dependability. The primary reasons why we need REST Assured are as follows:

The ability to safely modernize outdated systems and enterprises toward digital transformation is made possible by APIs. APIs should be fine-tuned to meet the exact needs of a given business scenario. For a successful API, REST API testing is important and helpful. You can manually test an API with the help of POSTMAN, or you can use automation with the help of the REST-assured dependency code already out there.

However, assuming you have a basic knowledge of Java, Rest assured makes it easy to send simple HTTPS requests with user-friendly tweaks. While familiarity with API testing and integration testing is required, Rest Assured offers good backend assurance once those chores have been automated, allowing front-end testing to concentrate on the user interface and client-side procedures. Rest Assured has benefited from the addition of numerous proper methods and libraries as an open-source project, making it a fantastic option for automating APIs.

The four most common actions on a RESTful interface are: create, read, update, and delete.

Tools like POSTMAN and frameworks like Rest Assured and Rest API are used for the manual and automated execution of these tasks, respectively. Additionally, it explains how REST Assured API testing makes it easier to test and validate RestAPI with no complications. 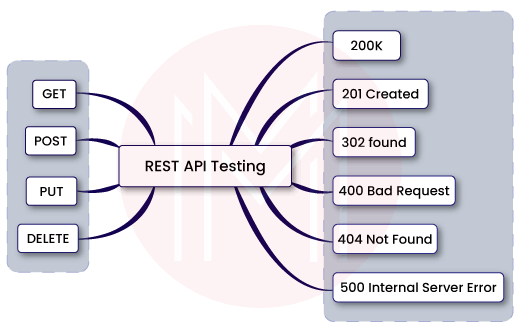 Let's look at the CRUD in detail: The acronym CRUD stands for "create, read, update, and delete."

2. Read Operation Performed Using the GET or get() Method

REST Assured can validate and verify the response to the POST, GET, PUT, DELETE, OPTIONS, PATCH, and HEAD requests.

For example, we can check the response code, status message, headers, and body.  Its support for XML Path and JSON Path syntax, which allows users to examine particular components of the return data, is a robust feature that makes REST guaranteed so helpful. It is a lot like using the XPath API.

How to make a GET request using REST Assured?

The GET method is one of the most common ways to ask for information from a specific resource.

get(): When making a GET request, use this function.

How to send a POST request using REST Assured?

The POST method of the HTTP protocol is one of the most widely used methods. It transmits data to a server to build or update a resource. Some functions include

How to send a PUT request using REST Assured?

You should use the PUT operation when changing a resource already included in the database. Some functions include

How to send a DELETE request using REST Assured?

As its name implies, the DELETE method is simple to grasp and is used to delete any resource.

Delete(): delete () is an operation that can delete any resource.

How to use Rest-Assured API testing to set up the Cucumber Test Automation Framework?

A cucumber is an open-source tool that allows behavior-driven development (BDD).

Cucumber, in its simplest form, is an English-driven testing framework. It is a tool for documentation, development aid, and testing. The cucumber is given a set of steps for each possible case. Cucumber delivers a report indicating whether or not each scenario successfully ensures the software complies with the specification.

For the cucumber test automation framework to understand the situation, it needs to follow some fundamental syntactic conventions known as Gherkin. Those are explained below in detail.

Unless you intend to build your web service, you may have already decided which protocol to use. Only a few websites, including Amazon, provide these features. When deciding on a web service, you should consider how well it satisfies your needs before you worry about the protocol's specifics.

Get familiar with REST and SOAP in great depth before attempting to briefly understand the differences between the two.

Similarities - Which one to choose?

SOAP is a more rigorous set of messaging standards than REST, although SOAP and REST share similarities in the HTTP protocol. The rules outlined in SOAP are necessary since, in their absence, we cannot reach any level of standardization. The REST architectural style does not involve processing and is inherently more flexible.

Data sharing can be facilitated using either the Simple Object Access Protocol (SOAP) or the Representational State Transfer (REST) model, both of which are based on mutually agreed-upon standards. A significant number of legacy systems may still use SOAP.

However, REST was developed much later and is regarded as a more efficient alternative for web-based scenarios. REST is a set of standards that provides flexible implementation, whereas SOAP is a protocol with specific criteria, such as XML messaging. REST offers more freedom in terms of how it can be implemented.

Since REST APIs are relatively lightweight, they are ideally suited for use in more everyday situations, such as the development of mobile applications, serverless computing, and the Internet of Things (IoT). SOAP web services provider with built-in security and transaction compliance that are suitable for the requirements of a wide variety of businesses; nevertheless, this also makes them more cumbersome.

So, it's your choice based on your work, and you must select the required web service protocol.

REST Assured has a lot of other handy capabilities for developing RESTful API tests. Let's look at a few of them.

The verification of an API's functionality does not stop with reviewing the contents of the response, though. The application or component must receive a technically sound answer, including having the appropriate status code, the necessary header data, and the proper formatting. REST Assured can be used to verify these requirements.

After validating the data successfully in the REST API connection, you should repeat the preceding steps for each request that you want Jitterbit Harmony to be able to make to the API to interact with your endpoint's data. Finally, you should extract the request and response structures (if present) to separate files that you will need in design frameworks.

The capability to construct data-driven tests is another feature of REST assured that strengthens your API testing. If you wish to verify that zip code 12345 is indeed linked to Schenectady, New York, you can add a new test case to the previously generated zip code test. Instead of duplicating the test and changing the essential bits, you might use data-driven testing (where a single test is fed two sets of data records) to save time and effort in the long run. To accomplish this, a test data set must first be generated.

Many RESTful APIs have a mandatory authentication phase before clients access their resources. A basic username and password in the header of every call and OAuth 2.0 authentication are just two of the widely-used API authentication protocols that REST-Assured supports.

The following are the advantages that you can expect to enjoy when using REST Assured:

The following are some of the issues with the REST Assured library:

1) What is REST assured, and why is it used?

Rest Assured is a Java package used for testing REST APIs. To interact with REST web services, the Java library can be considered a headless client. The Rest Assured library can validate server-side HTTP answers, and libraries built on it can do the same.

2) Is Rest assured easy to learn?

Rest Assured is a very simple language, and it's just as easy to get headers.

3) What does REST API stand for?

REST, short for "Representational State Transfer," is a software architecture that specifies certain behaviors for application programming interfaces. In its original form, REST was a set of guidelines for coordinating data transfers over a dynamic network like the Internet.

4) Is REST API backend or frontend?

Both GraphQL and REST architecture is widely used for building backend APIs. REST APIs have become the standard form for developing backend APIs over the past decade. And many companies and developers rely heavily on it.

REST is an architectural style for the creation of distributed hypermedia systems. A REST API is an API that adheres to the architectural limitations of the REST style. There are numerous approaches to creating a Java REST API.

We hope this tutorial has provided you with a comprehensive understanding of the Rest assured. Rest assured foundation in Java makes it a relatively easy language to pick up. It helps in retrieving request and response values from challenging JSON formats. While Rest Assured is particularly useful for JSON-type responses, its methods might need to be revised for HTML or plain text information.