Katalon and Cypress are software testing automation solutions that allow businesses to automate their software testing needs, decreasing the need for human intervention while enhancing speed, reliability, and efficiency. This Katalon vs. Cypress blog  compares the differences between the two.

Katalon Studio is a robust automation tool with a Selenium-based engine that was initially released in January 2015. Katalon is primarily meant for building and reusing automated UI test scripts without the need for coding. Cypress is a JavaScript test automation tool for web automation. It helps teams to construct web test automation scripts.

This Katalon Vs Cypress blog will assist you in understanding and selecting which tool will be beneficial to the success of your organization.

Katalon Studio is a free web, mobile, and web service test automation tool. It offers a record & playback feature as well as a manual mode to assist non-programmers in creating automation test cases successfully. It also offers a script option for people who are familiar with programming, which allows them to write Groovy test scripts.

Given below are some of the key features of Katalon Studio

Everything a tester needs to deploy a robust test automation solution in a single, well-organized deployment package.

Beyond the first setup, Katalon Studio provides an easy way to configure the workspace. Using Katalon's which was before layouts and testing requirements, testers may execute their initial test suite quickly and easily.

Testers can quickly build and perform automation test rough writings thanks to built-in example copies and explicit procedures on field-specific training. Katalon can handle every step of the process, including project organisation, test engendering, execution, report generation, and support.

Expert testers can utilise a full IDE to produce increased rough scripts, while new testers can use recordings and keywords to create automation tests.

In order to set up a new project, Katalon studio reduces the amount of time required by automation teams and individual testers. Executing test cases and monitoring the outcomes is quite simple for them. 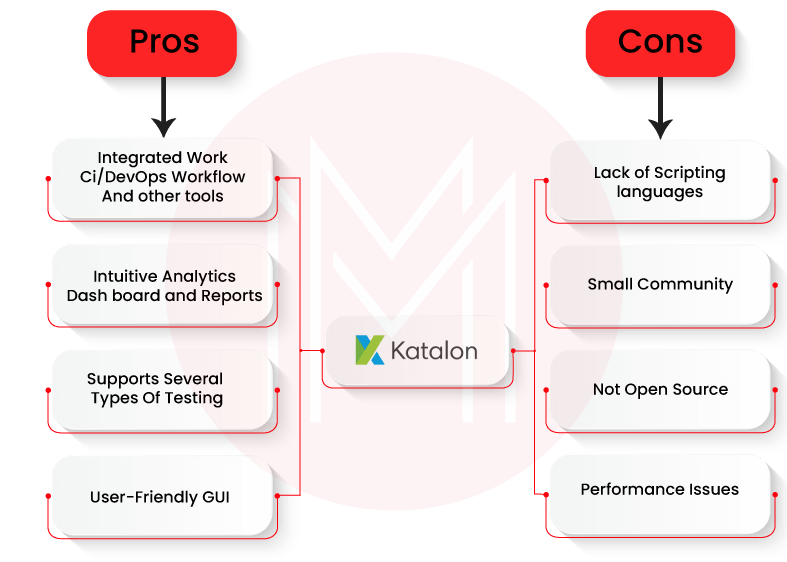 Cypress is a modern web-based front-end automated testing solution. Cypress is based on a new architecture and runs in the same run-loop as the programme under test. As a result, Cypress can test everything that runs in a browser better, faster, and more reliably. Any front-end framework or website can use Cypress.

It has a number of features that make the job of a test developer much easier:

While the tests are running, it can take screenshots of the software. We can then utilise the Test Runner window to hover over each command and examine what happens at each level as a test developer.

It allows you to debug your tests using familiar tools like Developer Tools. Debugging is a breeze thanks to the legible errors and stack traces.

There's no need to add explicit waits or sleeps to your tests using Cypress. Before proceeding, it automatically waits for orders and assertions.

Using the spies and stubs supplied by Cypress, you may verify and control the behaviour of functions, server responses, and timers at run time, similar to unit test scenarios.

You may stub network traffic and tailor the response of your API calls with Cypress.

Because Cypress doesn't use Selenium or WebDriver and instead runs tests directly in the browser, it facilitates quick, consistent, and flake-free testing.

When running from the command line, it automatically captures screenshots of failure and records videos of your complete test suite. 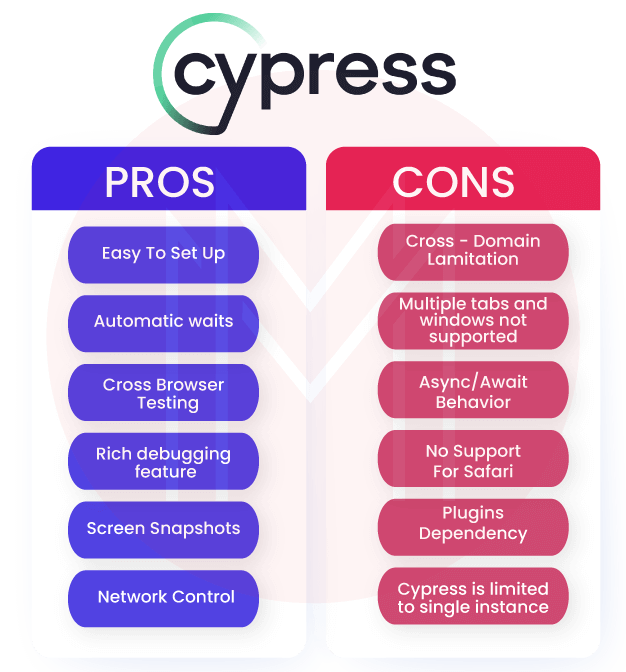 Can you use Cypress for Mobile Testing?

Instead of Cypress, you'll need to utilise an app testing solution like Appium to test a phone device for iOS or Android (but Gleb Bahmutov's React Native examples are worth looking at). Cypress is often described as a browser-based testing tool.

Katalon, one of many no-code interfaces for creating Selenium scripts and allowing developers to make manual changes.

Cypress, another open-source testing framework that is similar to Selenium but is built in JavaScript and has major modifications to help incorporate automation testing into the development workflow. Cypress, unlike Selenium, does not support widely used programming languages such as Java, Python, Ruby, C#, PHP, and others.

These two web automation technologies include built-in test management and parallel testing (i.e., running several tests at the same time) features, so you won't have to pay for extra services like a testing grid. Here is some terminology that provides a clear comparison to help you grasp how each strategy works in practice.

1. Testing the Visual Layer vs. The Underlying Code

2. Who Can Write Tests and Who Owns QA

4. Finding the Root Cause of Test Failures

5. Testing Actions Outside of a Web Browser 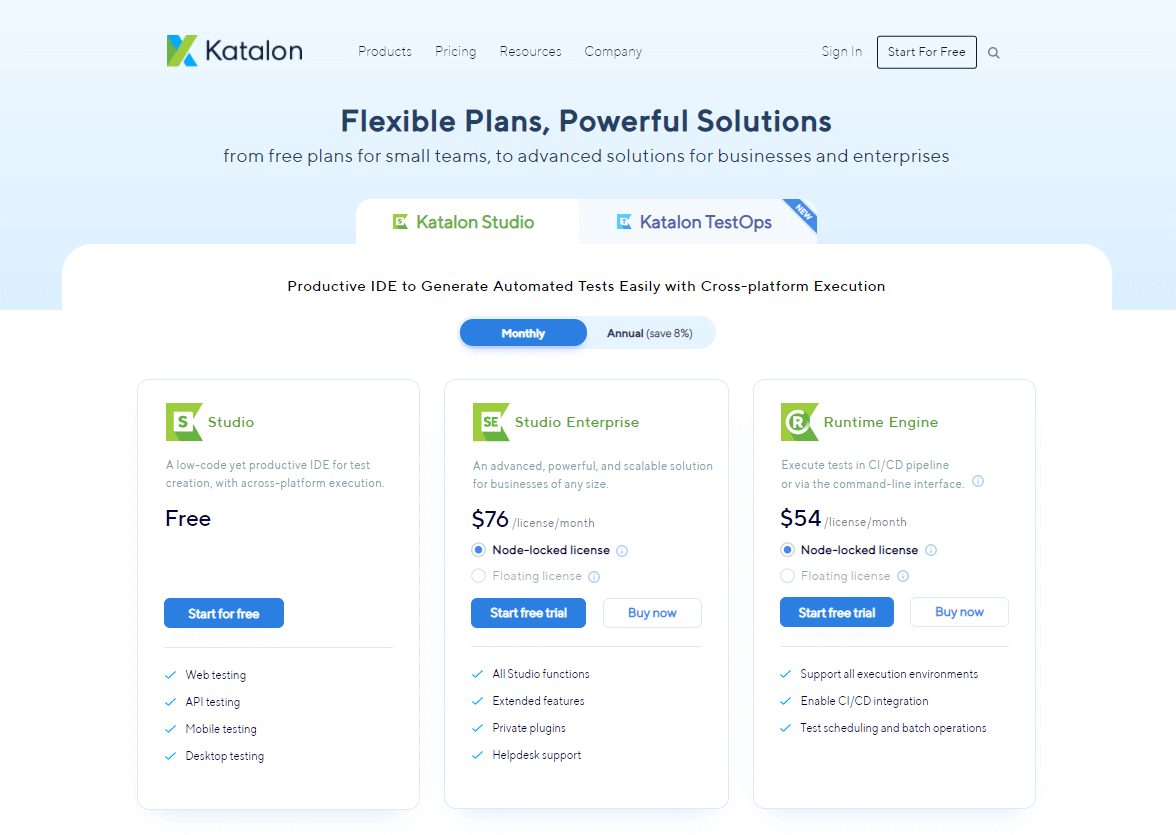 Free: Multiple tests can be run at the same time in the free edition of Cypress, as well as test debugging via screenshots and manual editing, API integration, analytical reporting, and community support. You can have up to three users and receive 500 test results every month.

Team: Everything in the free version is included in the 'Team' plan, plus flake detection, Jira integration, and direct email assistance. For $75 per month, this package covers up to 10 users and 10,000 test results every month.

Business: In addition to all of the capabilities found in the 'Team' plan, the 'Business' plan includes organisational features like SSO and the ability to run failed specs first and stop runs when they fail. This plan allows up to 40 users and 10,000 test results each month for $300 per month. 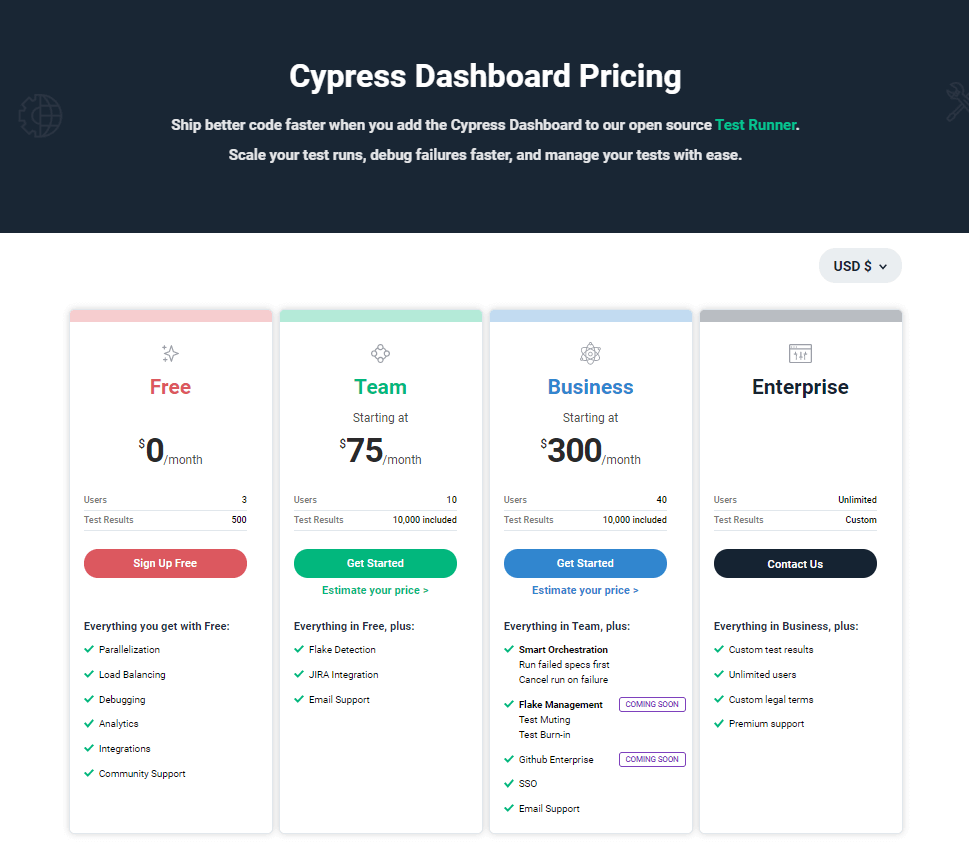 Katalon Studio: Katalon Studio is a free version of Katalon's software designed for personal use. They evaluate websites, desktops, mobile devices, and APIs. The testing capabilities are rather minimal at this level. You can run the test and see if it succeeded or failed, but you won't have access to screenshots, recordings, or suggested fixes.

Katalon Runtime Engine: Katalon Runtime Engine is an add-on for either of the studio plans listed above, rather than a distinct product. It works in any execution context, including console mode and the command line interface. You can run tests in batches and schedule them.

Finding out the advantages and disadvantages of Katalon and Cypress becomes a lot easier once you are aware of their various features. As a result, you'll be able to make a more informed decision. So, now that you've read this comparison, choose the tool that best matches your requirements.