Markup languages include both XML and HTML. Despite having similar pronunciations, they are distinct languages with various uses. But the two markup languages interact with one another in a number of ways, so it's critical to comprehend both of them if you want to master web programming. Here is all the information you require regarding XML vs. HTML.

Pros and Cons of HTML vs XML

FAQs Regarding the Difference Between XML and HTML

All of the programs, languages, and technologies used to create a web page use HTML as their common language. HTML provides the fundamental structure for all websites. And HTML5 is the most recent version of HTML that is now in use.

HTML stands for Hypertext Markup Language. After reading this extensive explanation of HTML, we undoubtedly want to know what hypertext markup language means!

We will first go through what HTML5 and HTML are in order to better comprehend markup language before getting into their differences. And by that time, you'll be able to distinguish between the two on your own!

HyperText Maurkup Language, or HTML. Tim Berners created it to make electronic or online pages. The pages are linked together by hyperlinks. HTML is the language that was used to create everything on the internet. HTML enables the insertion of text and graphics into web pages. HTML has undergone several iterations, with HTML5 being the most recent. It serves as the framework for web development projects, giving them direction and a foundational look. Attributes and tags are part of HTML. Angle brackets (<>) are used to denote tags, and quotes are used for attributes.

In this case, the tag p designates a paragraph, and the attribute text-align aligns the content as needed. The element's end is indicated by the tag that ends in a slash(/).

HTML doesn't care about case. If the codes are written syntactically, there are no errors, and the machine quickly understands them. All text editors can access the written files, which are saved with a ".html" extension.

Extensible Markup Language is known as XML. In contrast to HTML, XML is used to store data rather than show it. It is frequently used for data transport. This is a markup language, so both humans and machines can readily understand it. XML is independent of hardware. We can employ elements and create specialised markup languages with XML. XML tags are self-descriptive, allowing users to design their own. The most recent version is XML 1.1, which was created by the W3C in 1996. XML tags are written within angular brackets (>), just like HTML tags.

XML is case-sensitive. All text editors can read, write, and modify the codes, which are saved with the.xml extension.

Pros and Cons of HTML vs XML

Since HTML is the primary language used to construct web pages and is a hypertext markup language, HTML5 and HTML are fundamentally different from one another (HTML). An updated version of HTML called HTML5 has features for the internet and a new markup language. The HTML language does not allow video or audio. HTML5 can handle both audio and video. Here are a few of the key distinctions between HTML5 and HTML, according to various criteria: 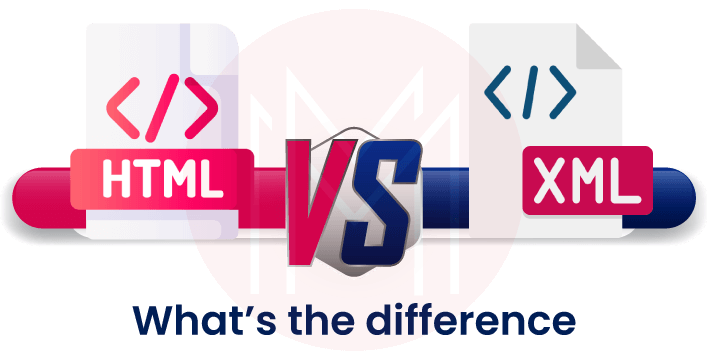 FAQs Regarding the Difference Between XML and HTML

1. What distinguishes XML from HTML that is advantageous?

Without controlling the output's appearance or presentation, XML concentrates on the transfer of data. Due to HTML's emphasis on presentation and complicated coding, this makes XML simple to use.

Depends on the goal. HTML is preferable if the main goal is to display content. However, XML offers superior browser flexibility and capability than HTML when it comes to exchanging or conveying the data if it contains an excessive amount of information.

3. Can XML and HTML work Together?

Yes, XML and HTML are compatible with one another. While XML can convey data and information, HTML can handle the presentation and display of that data.

4. What connection does HTML and XML have to one another?

eXtensible Markup Language (XML) and HyperText Markup Language (HTML) are acronyms for each other. As a result, they are both markup languages that are used to emphasise specific online document parts and that are also understandable by both humans and machines.

Neither the front end nor the back end are XML. A website or application uses this markup language to store and transfer data.

Yes. The <xml> tag can be used to incorporate XML codes in HTML texts.

7. What is the complete form of the two terms, XML and HTML?

The acronym of HTML is Hypertext Markup Language, while XML stands for eXtensible markup language.

Both XML and HTML are data-related markup languages. It is intriguing to learn that both of these descended from Standard Generalized Markup Language (SGML) and reply to requests in a browser either directly or via AJAX. While XML saves and transmits data from one system to another, HTML only shows data. Despite the fact that they are both markup languages, they operate very differently. Learning both HTML and XML is crucial since they are the structural and essential components of every website and application.