HomeGeneralTop Skills You Need to Become a Data Scientist

Top Skills You Need to Become a Data Scientist 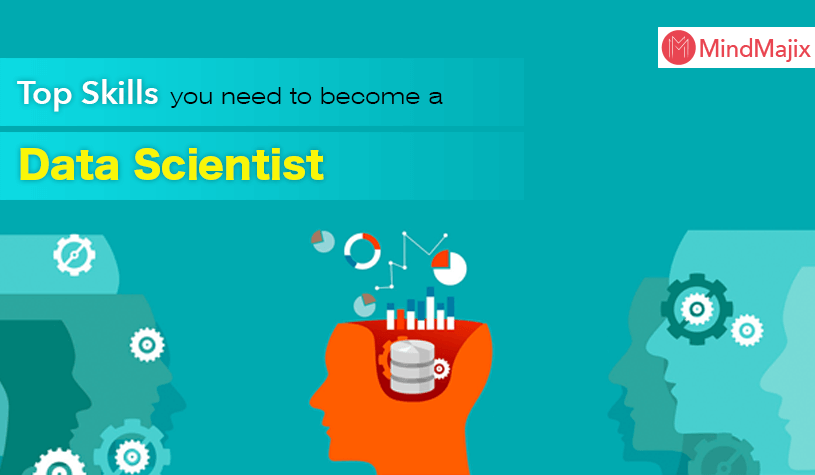 Introduction to the Data Science

Before beginning your career as a data scientist one must know what data science means. The branch of science that is concerned with multidisciplinary combination of development of algorithm, inference of data and technology that is required so that the problems which are complex analytically can be solved. To become a data scientist there should be three main qualities in a person which include expertise in mathematics, technological skills which also include hackings and strategic or business knowledge. Also another important fact is that one should not confuse a data scientist with an analyst.

The Technical Skills Involved are

For being a data scientist it is very important to maintain a good result through the academic career with at least 88% in master's degree and also have good marks in Ph.D. The main subjects that they should know are mathematics, statistics, computer science and engineering.

* The knowledge of python coding is very important for a data scientist. Since python along with other languages like Java, Perl, C and C++ is very important.
* Hadoop platform is a growing platform and it should be preferably known by a data scientist. Also, it will be beneficial for them if they have a certain idea about Hive, PIG and another cloud tool like Amazon s3.
* The data scientists should also be able to perform SQL database and coding.
* Another important criterion is that they should be able to perform with data that are unstructured.

The Non-technical Skills Involved are

* A data scientist must have the skills of intellectual curiosity.
* The knowledge of business acumen is also very important as they will need to understand the working process of the industry and also ten problems that a company is facing so that they can solve it in a better way.

1. Fundamental knowledge on the following fields:-

A data scientist should have apt knowledge in the fields of -

* Linear algebraic functions and matrices – This is one of the most basic learning criteria of a data scientist since it will be helpful to learn the internal algorithm of a machine and linear algebra helps a lot in this perspective.

* The field of extract transform load – This another very important field. As the name suggests extract, transform and load are three types of database functions that are into a single structure so that it is more useful get data from a database and then again place it to another database.

* Another crucial criterion of a data scientist is to have some idea about business intelligence VS Reporting VS Analytics.

2. The statistics skills that are required are –

The skills that which generally falls under the statistical category includes:-

There are several types of programming language in the world of technology and the most basic one is C. But for a data scientist, it is important for them to know R or Python.

4. The concept of  machine learning and advanced Machine Learning

There are basically two techniques for machine learning:-

* Linear regression – Used to define the relationship between a variable that is scalar dependent and another one which is independent.
* Logistic regression – another statistical method that involves one or more independent variables in a dataset.
* Random forest – This is the learning process of various regressions and other tasks that are generally done by the technique of building multiple trees.
* Decision tree – this is a process that involves showcasing algorithms that only have control statements.
* K nearest neighbour
* Clustering

The concept of deep learning is a talked about topic as it has the ability to solve problems that are faced while performing machine learning. There are two very key features that are related to data learning.

* Neural networks and its fundamentals
* For the purpose of creating models of deep learning, any one of the libraries is used like for example Keras or Tensorflow.
* There should also be an understanding of the working mechanism of convolution neural networks, RBM, Recurrent Neural Networks and also Autoencoders work.

7. The Concept of Big Data

The concept of big data is a very important concept in the present world. The need for collecting and preserving all the data that are being generated has led to the rise of big data as no wants to miss out on anything. For a data scientist, it is important for them to have some first-hand experience with the frameworks that are utilised for the processing of big data. The two most frameworks are:-

8. The concept of Data Ingestion

The process that involves importing, loading, transferring and processing of data o that it can be used later on or stored in a database is known as data ingestion. There is several data ingestion tools like.

9. The concept of Data Munging

The process that is applied on the raw data to make it suitable to input to the analytical algorithm is known as data munging. For this purpose a data scientist can make use of languages like R and Python. Data Munging is a very important concept of the data lifecycle. A data scientist should also be able to identify the dependent label or variable. And they should also remove the inconsistency of the dataset.

For being a good data scientist one skill has enough knowledge about the following toolboxes:-

11. The concept of data-driven problem solving

The concept of data-driven problem solving is something that cannot be learned but rather developed. A job of a data scientist is to approach a problem in a productive way and have the power to identify the following situations:-