Java Tutorial - Java is a robust and widely used programming language. This Java tutorial is designed for anyone who wants to learn Java from scratch. This tutorial will walk you through all Java concepts by using examples. Examples are 100 times better than text when it comes to understanding any concept. We have included all the concepts with an example to gain in-depth knowledge of Java

Java is one of the most popular programming la0nguages. It was developed by James Gosling in the year 1991, and the purpose was to use it in his set-of-the-box projects. It was initially named as ‘Oak’ which is a tree name that stood outside the Gosling’s office window and also went renamed it as a ‘Green’, but later it ended up with a name known as JAVA.

Sun Microsystems originally developed Java programming language in the year 1995 initiated by James Gosling’s, and it was the first core component system of the Sun Microsystems. Java has got massive popularity among the programming languages due to its flexibility to configure on multiple platforms. For example, J2EE is used for the development of Enterprise applications and J2ME is for mobile applications.

Unlike the C compiler, the Java compiler produces and converts the source code into a unique format called bytecode. Bytecode is understandable by any JVM installed on any Operating System. Java’s runtime platform runs on top of the hardware platform of any OS. Due to this, Java source code can run on all OS and hence make Java a platform-independent language.

Java is declared the most secure programming language. It is secure as its source code runs in a virtual machine sandbox.

Java bytecode is portable. You can carry it to any platform and it will work. It doesn’t require any implementation.

Java’s bytecode is close to native code and that is why it is faster than all other programming languages.

Java compiler created an architecture-neutral object file format. This facilitates the compiled code to work on many processors with JRE.

Java enables developers to code in such a manner that multiple tasks can be done simultaneously. This can enhance the user experience of any application due to its interactive nature.

Java is designed and developed to work in distributed environments on the internet.

How does Java Works?

To know how Java works, we need to understand 3 basic terms: JDK, JRE, and JVM. 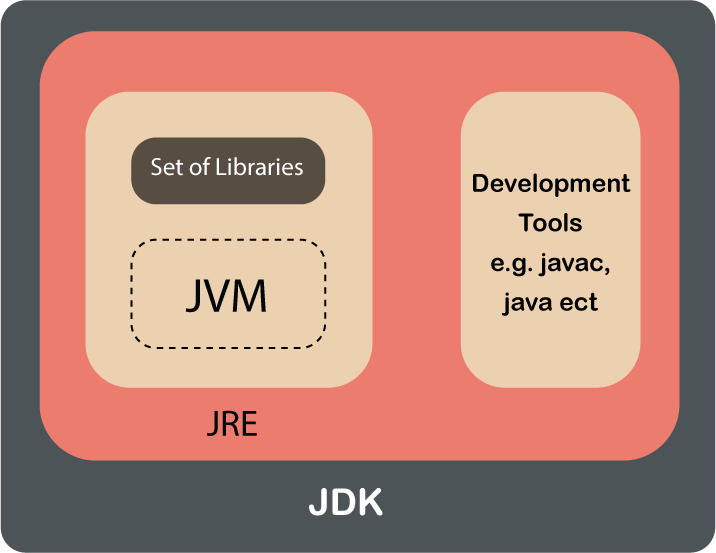 JVM: JVM stands for Java Virtual Machine. It does not physically exist hence called a virtual machine.  JVM converts bytecode into the language understood by a particular OS and is responsible for executing Java code line by line. It is also termed an interpreter.

JRE: JRE stands for Java Runtime Environment. It provides the runtime environment for executing Java code. It can only execute the existing code. We cannot develop code or build new applications using JRE. It contains a set of library class files and other files which JVM uses at runtime.

For executing Java code, we need below 3 things installed in our machine

Nowadays, we have so many java tools available like Eclipse, Netbeans which makes coding interesting and easy.

Java can be installed from oracle’s official website. Once it is installed, you can verify the version from the command prompt using the command “java -version” like below:

Once it is installed, we need to set it up in our system to run the java program effortlessly. To set up the Java environment in Windows, follow the below steps.

[Checkout What is PyCharm]

Let us start by writing a simple Java program.

The file which contains Java source code is called a source file.

To compile the program, we need to pass the filename to the command javac like shown below:

The javac compiler generated the .class file which is nothing but the bytecode version of the code written in the source file. Java bytecode is the intermediate presentation of the code which is understood by JVM. So, the output of javac cannot be executed directly.

To run the program, we need to pass the class name with the command java.

This will execute the bytecode and print the output:

Now, let us try to decompose the code and understand the keywords used in this code unit.

[Checkout: What is Site Reliability Engineering]