In this Clojure tutorial, we will start from the basics of Clojure and learn all the major concepts of Clojure.

Clojure is a multi-paradigm, functional programming language that runs on multiple and distinctive hosts. JVM or Java Virtual Machine is one of the popular hosts in the world to run Clojure. Further, Clojure also has complete access to the entirety of the Java Development Kit and Java Functions. Programmers will find Java Development Kit and Java Functions out-of-box with Clojure. Additionally, programmers can also access JavaScript runtime through Clojure through either a node or a browser.

Like its counterparts, Clojure is very much similar to other Lisp dialects where it treats Clojure as the core data alongside a Lisp macro system. Given that Clojure's development process is community-driven, currently, it is being overseen by the programming language's core designer Rich Hickey who is also Clojure's Benevolent Dictator for Life. The flexibility of Clojure allows programmers to run on a handful of other ecosystems such as dot.net; however, the Java Runtime and Java Scripts are the primary supporting targets for the intuitive programming language.

Suppose you're building a new business or even overseeing the development of the existing business. In that case, the first-ever crucial thing to do is choose a language that you'll preferably rely on from the day of inception to your retirement. In the world of programming languages, certain people consider choosing Clojure as an unconventional choice, but it has seen a massive amount of adaptability. The programming language is very much different from the mainstream options.

Let's take a look at why you should choose Clojure over the conventional and mainstream programming languages:

1. It is the best of both worlds

Over the two decades in the world of software development, it is evident that less coding is better. Data orientation correlates with smaller codebases. Everything is complicated in computer programming first; however, having something simple could save your time and effort. With Clojure, you won't have to rely on thousands of code lines at all times. The best part is that you have all the right to stay agile as you could with sophisticated programming languages.

Smart people generally use Clojure to create an excellent opportunity for other intelligent people to utilize.

Clojure comes with a set of intuitive and useful features that forms together with a coherent, simple and extremely powerful tool:

Clojure delivers the tools that avoid the conventional mutable state, emphasizes recursive iteration rather than looping with side effects, and provides functions that act like first-class objects. Clojure is completely impure; however, it supports the philosophy that all the programs are fully functional, making it stronger than ever.

Clojure features a dynamic ecosystem that allows programmers and developers to interact. The language constructs are reified, which is why they can be changed and examined. Moreover, you can also grow the program with loaded data, fixing bugs, adding features, unbroken streams, and testing.

It is effortless for a system that runs with polymorphism to extend and change. Clojure does offer flexible, powerful, yet simple mechanisms for the overall runtime polymorphism. The embedded data types and protocols in Clojure aids in adding tools to oversee abstraction and data structure. Further, it doesn't compromise any of the facilities of any host platform.

As mentioned during the introduction, Clojure shares the traits of programming languages part of the LISP family. A distinctive feature of any LISP programming language is that it is made into several other languages. However, the overall approach of LISP as code-as-data and the macro system is still apart. In addition to this, the vectors, sets, and maps are regarded as a first-class the same way it is in LISP.

Clojure is hands-down one of the most simple multi-threaded programming languages in the world. In Clojure, core data structures are immutable, making it seamless to share between different threads readily. Clojure is also a functional language that further allows the core to change its state while providing an excellent mechanism by ensuring that things stay consistent when there is a state change. It even helps developers at the time of alleviating to avoid conflict like manually using up the locks.

Clojure is specially designed to become a programming language for hosting, which further shares the Java Virtual Machine system type, threads, GC, among others. All of the functions are compiled to the Java Virtual Machine bytecode. Furthermore, Clojure is a substantial consumer of Java libraries that provides dot-target-member notation to make calls for Java. Clojure also supports the implementation of both Java classes and interfaces.

The libraries that programmers can leverage are as follows:

Clojure allows flexible run time for composing applications. If you're looking forward to kickstarting a simple clone for Pastebin, then the only components you'd need are a couple written below:

What are the components in Clojure?

REPL, aka Read-Eval-Print-Loop, is a holistic tool to experiment with Clojure's code. Furthermore, it also allows users to initiate interaction with running programs and try things out seamlessly. It presents a prompt that allows for entering the code and reads all the input while printing and evaluating it. At the same time, it presents another prompt.

The process also enables a steadfast cycle for feedback that is not possible in other programming languages.

How to begin with REPL Session:

Then the following window will appear:

Then you can begin to evaluate commands in Clojure in the REPL window as you deem fit.

If you’re using Eclipse and want to start a session with REPL, then you must have to click on the Menu option and choose to Run As -Clojure Application. 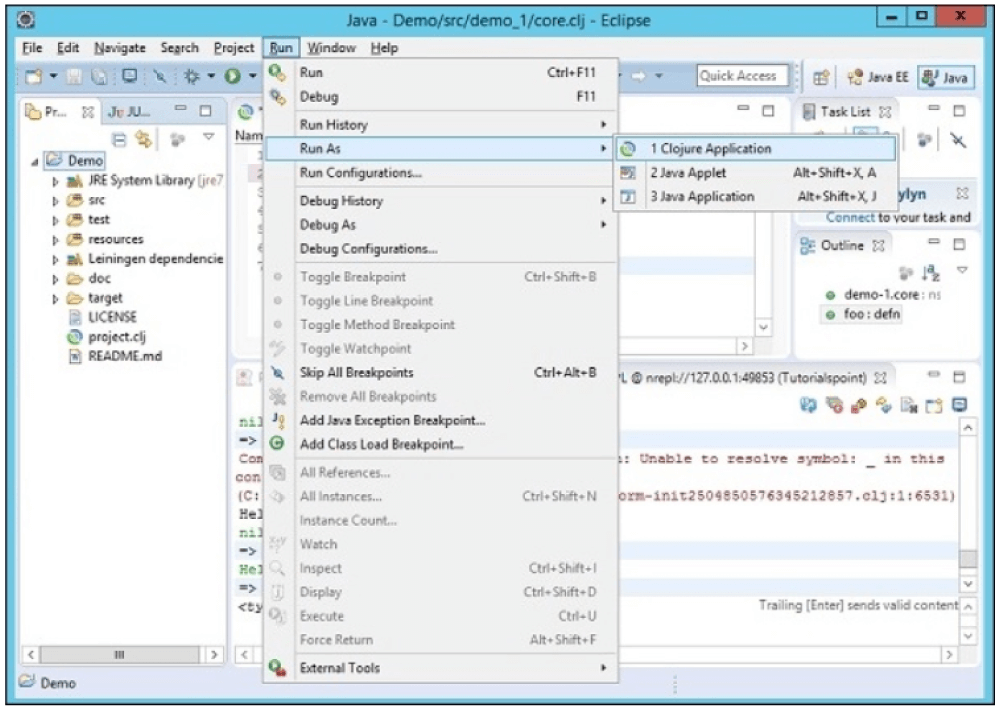 The step will begin a new session in REPL is an entirely distinctive window right alongside console output. 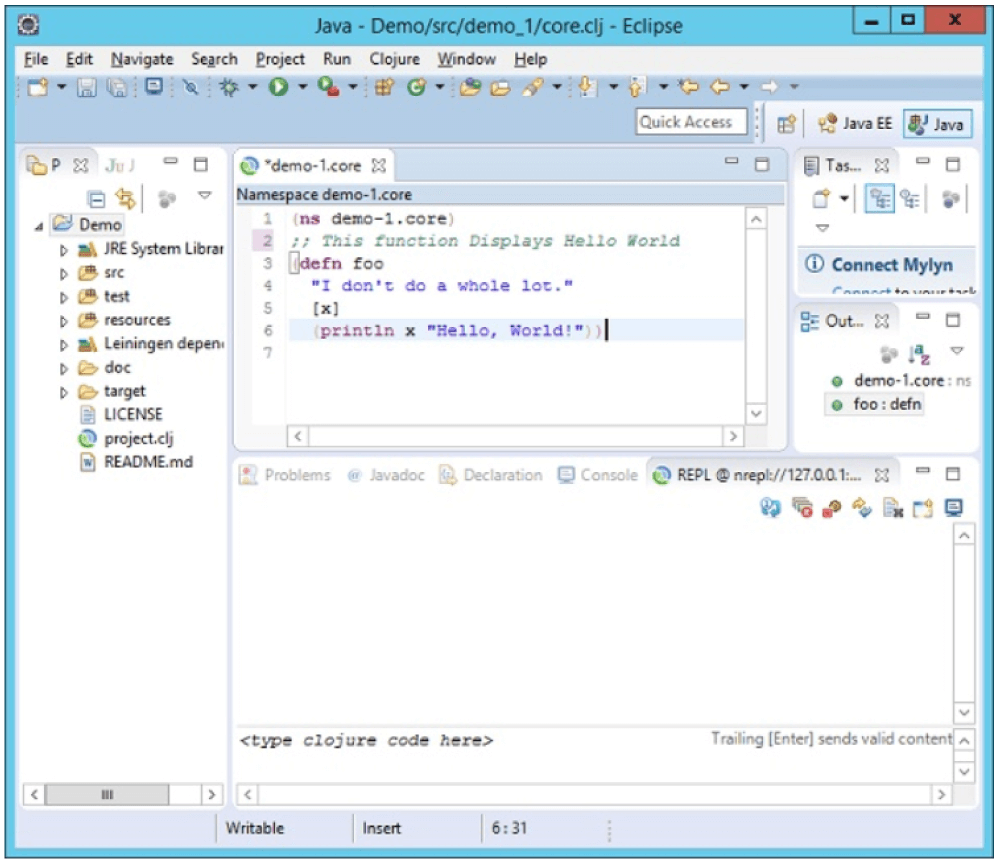 As far as conceptuality is considered, REPL shares a striking similarity to the Secure Shell in a similar manner where users tend to use SSH to interact with remote servers. Clojure REPL empowers users to interact with an overall running process. The feature is compelling as you can attach REPL’s application to live to modify the program as it runs.

REPL hosts several variables which are quite useful in real-world applications. These variables are taken into consideration for evaluating the overall results for three expressions.

Take a look at the examples below:

The example sets a couple of strings sent to REPL’s window like ‘Hello’ and then ‘World’. Now, the 2nd and 1st variables will recall the last couple of expressions that can be put into the evaluation.

The structure for decision-making requires programmers to identify one or multiple conditions to evaluate and test done by the program. It also includes a statement(s) that will determine the truth about the situation.

Most data types in Clojure’s programming are immutable. When things come down to concurrent programming, using codes by using data types that are completely safe even when codes are running on several processors. However, many-a-times, there will always be requirements for sharing data and also the instances of sharing data among more than one processor. Here, it becomes quite essential to ensure the data state maintains integrity while working alongside multiple processors. The process is called concurrent programming; Clojure provides the overall support for programming.

The STM or Software Transactional Memory System via ref, dosync, alter, set, etc. It supports the overall sharing and changing of the state among threads in a completely coordinated and synchronous manner—the to-and-fro motion of sharing and changing of states among threads in no-sync and independent methods. The Atomic system also supports the state between threads, which are in sync and separated at the same time. On the other hand, the productive var system supports separate states right within the threads.

There are several other computer programming languages that follow the model for concurrent programming:

Clojure doesn’t possess any locks. However, any indirect references made to immutable persistent data structures make the language an obvious choice.

Clojure has the following references in its ecosystem:

Clojure is quite a practical LISP that is well-designed, lean that aids in writing lean yet maintainable code. It offers first-class support for both Java and JavaScript compatibility aids in leveraging the prevailing ecosystems. Many problems revolve around other programming language ecosystems which can be addressed seamlessly. It takes a functional approach for solving the problems which exist among programming languages. Clojure aids programmers to also address the ever-growing challenge that they face in the real world. The programming language also offers an extraordinary learning curve.