This article brings you the basic comprehensive concepts of EJB. And mainly, it focuses on all the questions that are frequently asked in job interviews. It includes definitions, components, how to deploy servers, and many important topics covered in this blog. So, let's get started!

Enterprise Java Beans (EJB) is a developing framework for building highly scalable and dependable enterprise applications that run on J2EE application servers like Web Logic and JBOSS. Our Top EJB Interview Questions and Answers will provide you with a comprehensive knowledge of EJB concepts that will help you build and deploy a business application.

So here are the EJB Interview Questions that are classified as follows:

EJB provides a framework for developing and deploying component-based enterprise applications with excellent reliability, scalability, and performance. Any application server that complies with the J2EE 1.3 standard specification can host an EJB application. Containers offer transaction management and security, making it easier for developers and users to deal with them. Concentrating on business concepts is simple for them.

2. What are the advantages of EJB?

Here are the few benefits of EJB:

3. Explain the architecture of EJB?

Application servers' major functions are to: a. manage interfaces, b. execute processes, c. connect to databases, and d. manage other resources. 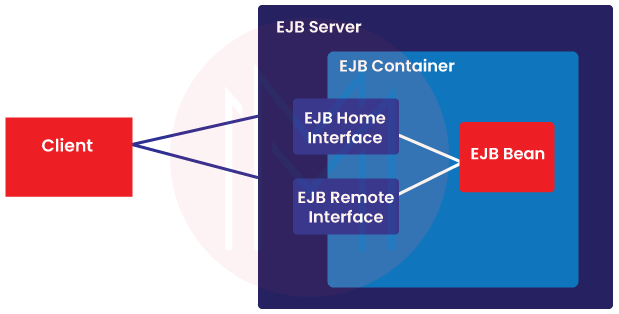 4. What are the various types of Enterprise Java Beans(EJB) components?

5. What are the various components of Message-driven beans?

There are two components in Message-driven Beans:

6. What are the differences between Stateless and Stateful Session Bean?

The following are the distinctions between stateful and stateless session beans:

7. What are the important elements of EJB?

As a wrapper class, the design pattern employed is a session facade. It is crucial for the implementation of business applications. It improves the system's performance by reducing network calls. Although it is implemented as a high-level component (Session EJB), it is made up of interactions between low-level components (Entity EJB). It also lets the client interact with bean elements.

9. Explain about the attributes of transactions in EJB?

1. What is a remote client view?

Only EJB 2.0 supports the remote client view specification. An enterprise bean's remote client view is location agnostic. A client operating in the same JVM as a bean object allows users to access the bean using the same API as a client functioning in a distinct JVM on the same or distinctive computer.

2. What is Local client view?

3. What Is a Deployment Descriptor?

A deployment descriptor is an XML file included in an EJB JAR or EAR file along with the enterprise beans. It holds metadata on the enterprise beans' contents and structure, as well as security and transaction information for the EJB environment at runtime.

When loading plug-ins, heavy-weight applications take a long time to load. The plug-ins that are required at that time are imported and configured using the lazy loading approach. This improves performance because only the plug-ins that are used are loaded. This also ensures application efficiency and reduces application startup time. This is how applications like Eclipse work. To put it another way, lazy loading aims to only allocate RAM when it is completely essential.

Enterprise Java Beans-Query Language is what EJB QL stands for. The EJB 2.0 standard added it. EJBs and dependent objects established by container-managed persistence allow users to navigate through a pipeline of EJBs. Persistence refers to a bean's capacity to save its existing state. EJB QL can be used in a variety of containers and persistent managers.

6. Explain the concepts of connection pooling features of EJB Container?

7. What is meant by transactions and various methods to manage it?

A transaction is a group of people who either work full-time or part-time to integrate and manage data. Acid transactions have specific qualities such as atomicity, consistency, integrity, and durability. The commitment to effective implementation over unsuccessful performance is the completed transaction.

There are two approaches to managing transactions:

8. What does ACID mean in the context of transaction management?

9. What is Callback in EJB?

A callback is a technique for intercepting the entire process of an enterprise bean. Callbacks for which callback controller methods are to be produced are described in the EJB 3.0 specification. These callbacks are invoked by the EJB Container. Callback methods can be defined in the EJB class itself or a different category. Many identifiers for callbacks are available in EJB 3.0.

1. To explain the timer service in EJB?

The Timer Service is a technique for creating scheduled applications. For instance, salary slips are generated on the first of each month. The Timeout annotation in the EJB 3.0 specification aids in implementing the EJB function in a stateless or message-driven bean. The method annotated with @Timeout is called by the EJB Container.

EJB Timer Service is an EJB container service that allows you to create timers and schedule callbacks when they expire.

2. Is it possible to have threading in an EJB application?

Threading is not possible with EJB since the container manages and controls the processing. If threading is permitted, the container will be impacted. As previously said, EJB is intended to reduce the developer's workload and allow them to focus solely on business logic. Because EJB isn't designed to manage the system or implementation, the thread is managed by the container.

3. What is the procedure and creation of Stateless EJB?

The process of creating a stateless EJB is straightforward:

4. What are the callbacks annotations for entity beans?

The following is a list of entity bean callback annotations:

5. What is EJB Containers' procedure for handling exceptions?

Because EnterpriseBeans are contained in a regulated container, the container is allowed to call the methods of your EJB components whenever it wants. The EJBContext Object contains information such as the current condition of the bean and the security credentials of the user currently accessing the bean in one object. Beans can use contexts to conduct callbacks and change their current status. The EJB context for session beans is the session context. The EJB context for entity beans is the entity context. The EJB context for message-driven beans is called the message-driven context.

7. Is Decorator a Design Pattern in Ejb?

No. The decorator design pattern displays very low-level dynamic polymorphism for a distinct and solitary entity (object of the class), but not for a class. It's the item that lets you add unique functionality to a single, pointed object while leaving others alone. It has a lot of parallels to aspectJ items, but not to EJB stuff.

8. What do you understand by annotation in EJB to do the database entity relationship with examples?

The EJB provides some annotations, which are listed below.

Modules are packaged as EAR, JAR, and WAR files dependent on their functionality.

10. Differentiate an interface and an Abstract?

The method bodies of an abstract class might contain code, which is not permitted in an interface. You must acquire your class from abstract classes, and Java does not enable multiple inheritances. In your class, however, you can implement numerous interfaces.

These EJB Interview Questions can help you estimate the types of questions you'll be asked during your EJB deployer job interview. I hope that these EJB interview questions and answers will assist you in accomplishing your job interview and securing your ideal job.