If you're looking for Compiler Design Interview Questions for experienced or freshers, you have come to the correct place. You can use the Compiler Interview Questions to ace your next interview and land the job of your dreams as a compiler developer. There are several job chances available from many reputable businesses worldwide. All the frequently asked compiler design interview questions are obtained from technical experts and google sources.

A computer program called a compiler converts source code written in a high-level language into a low-level machine language.

2) What is compiler design?

Compiler design involves developing software that can read and interpret source code written in a human language and produce binary code that can be read and understood by a computer. A compiler is a tool responsible for this transformation; it reads the source code, checks it for mistakes, and outputs the program in machine language. The generated binary code can be directly used on a computer without extra processing.

There are three types of compilers are described below:

4) What is an assembler?

When run on a computer, programs written in assembly language are converted into machine language using a piece of software known as an assembler.

6) What tools are used for writing compilers in Python?

Code motion is an optimization approach whereby a loop's total number of lines of code is reduced. Any expression that finishes with the same value after being run through the loop can benefit from this change. You can find this kind of statement right before the loop.

8) Explain what YACC is?

The YACC is a construction tool for the Unix compiler. It is put to use in the process of generating a parser, a piece of software that determines whether or not the source code for a program is valid by the syntactic rules of the language. In most cases, YACC is used in conjunction with the lexical analyzer tool, which produces a lexer.

10) What Are The Benefits Of Intermediate Code Generation?

11) What are the six phases of a compiler?

The 6 phases of a compiler are: 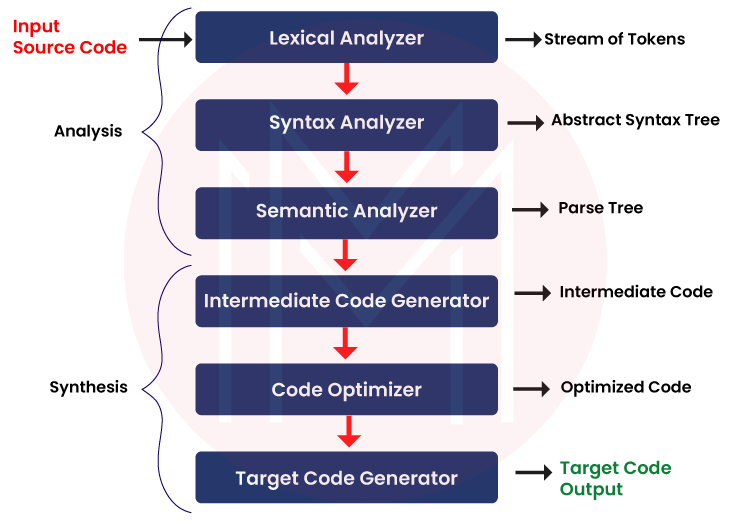 12) What are the two types of compiler design?

The two types of compiler design are:

13) What is meant by three address codes in the compiler?

As an intermediate code, three-address code is simple to produce and even simpler to translate into machine language. An expression can be represented by no more than three addresses and a single operator. The value computed at each instruction is saved in a temporary variable established by the compiler.

14) What are the compiler design tools?

The tools used for compiler construction are as follows:

15) Describe the Front End Of A Compiler?

A compiler's front end comprises the components of stages that are mainly device-independent and typically rely on the source language. The front end can also be used for some code optimization. Includes dealing with errors at each of those steps as well. Such factors include

16) Describe the Back-end Phases Of A Compiler?

The back-end phases of a compiler consist of the parts specific to the targeted machine that does not rely on the source language but on the intermediate language. One such example is:

17) Which language is used in compiler design?

18) What tools are used for compiler construction?

Tools for creating compilers are the same as those for creating other programming languages like Java and C++. Examples of this are:

19) What is bootstrapping in compiler design?

Bootstrapping is a type of compiler design in which the compiler uses an in-house language to implement the entire language rather than a different language for each language being compiled.

20) Can you explain context-free grammar and its importance in compiler design?

Grammar is a set of rules that specify how a language might be formed. A context-free grammar is a type of grammar. It is an important point in the design of compilers since the compiler needs to comprehend the structure of the programming language it is translating into machine code to do it accurately.

21) What is SDD in compiler design?

A type of abstract specification is called syntax-directed definition (SDD). It is an extension of context-free grammar where each grammar production X -> a has a set of production rules connected with the type s = f(b1, b2,......bk) where s is the attribute acquired from function f. A string, number, type, or memory location can be used as the attribute. Semantic rules are code snippets typically added at the end of production and enclosed in curly brackets.

22) What Is syntax in compiler design?

After lexical analysis, the second phase is syntax analysis or parsing. It examines whether or not the input has been provided in a way that complies with the syntax rules of the language in which it has been written by analyzing the syntactic structure of the data that has been provided.

23) What is Parsing in Compiler Design?

The process of moving information from one format to another is called "parsing." Parsing can complete this task automatically. The parser is a part of the translator that helps to arrange the linear structure of the text by a predetermined set of rules called grammar.

24) What is lexical analysis?

The technique of determining which lexemes are present in a sentence is known as lexical analysis. Words and morphemes are common names for lexemes, the more fundamental units of meaning in a language. Lexemes are also sometimes referred to as morphemes. Lexical analysis is used not just for studying written texts and phrases spoken aloud. However, it also has applications for analyzing the spoken language used in naturalistic research.

25) What is an overview of the structure of a typical compiler?

Lexical analyzers, code generators, parsers, and optimizers are the backbone of any compiler. Each line of code is parsed into individual tokens by the lexical analyzer. The parser then analyzes the code's structure and produces a code tree. After the code tree is constructed, the code generator converts it into machine code or assembly language. The final step is for the optimizer to examine the resulting code and perform any necessary optimizations.

A linker is a piece of software that helps connect many files. When you want to automate the process of merging two or more files, for example, when integrating a program with its data file, this is the method that is typically used.

27) What are the two parts of a compilation?

The front matter and contents comprise the two components of a compilation.

Front Matter: The first part of a book is called the front case, and it includes details such as the author's name, the book's title, the publishing date, and information on the author's copyright.
Content: The contents of a book include everything that can be found in the central part of the text, such as the chapters, sections, and appendices.

28) What are compilers and interpreters?

29) Why is parsing important for compiler design?

As the process of transforming code from one form to another, parsing is important to compiler design. A compiler must be capable of parsing the code to comprehend and produce the correct output.

Compiler-compilers, compiler-generators, and translator-writing systems are all names that have been used to refer to different types of software that assist in developing compilers. To a large extent, they are centered on a specific model of languages. As a result, they are suited for the generation of compilers for languages that share a similar model.

31) What is the fastest compiler language?

C++ is an easy and efficient programming language. Its fast runtime and extensive collection of Standard Template Libraries make it a favorite among competitive programmers (STL).

32) What are the properties of optimizing a compiler?

The properties of an optimizing compiler are:

33) What are the basic goals of code movement?

35) Write a regular expression for an identifier?

Let's say that a regular expression for an identifier is something like /[a-z]+$/, for example. In that scenario, the identifier will be checked against the string "a-z" + to establish whether or not it is a legitimate identifier. If it is not legitimate, the resulting string should not be considered a match if it does not match the pattern /[a-z]+$/. If it does match, it should be deemed a match.

36) What are some examples of compile-time and runtime errors?

Any fault during the software compilation process is a compile-time error. Any error that occurs while a program is being executed is referred to as a runtime error.

Examples: Syntax mistakes, type errors, and name errors are all examples of errors that might occur during the compilation process. Error during the runtime includes illegal type conversion, division by zero, and indexing outside the allowed range.

37) What does semantic analysis do?

Semantic analysis is an essential component of compiler design. It analyzes the significance of the logical structure of a program and then disassembles it into its parts. It assists in comprehending how the program operates and its tasks and ensuring that the compiler generates code that adheres to the structure.

38) What are the various types of intermediate code representation?

It's common to practice using a variety of intermediate code representations in the programming field. Examples of this are:

39) Can you explain what syntax and semantics mean in the context of compiler design?

While semantics relates to the meaning of the language, syntax refers to the rules guiding the structure of a programming language. A compiler must comprehend both the syntax and semantics of the source and destination languages to translate code from one language to another correctly.

40) What Are The Properties Of Optimizing Compilers?

41) Can you explain the various function parameter passing options?

A symbol table is a type of data structure that the compiler uses to track how the variables are used. It keeps records of names and information about how they are used and bound.

43) What is the Application of Compilers?

Here are some important applications of Compilers:

44) Which language is used in compiler design?

45) Why is compiler design used?

The process of building a compiler is a difficult one. A good compiler takes concepts from formal language theory, the study of algorithms, artificial intelligence, systems design, computer architecture, and the theory of programming languages and applies them to translate a program. Other areas of expertise include studying artificial intelligence and computer systems design.

47) What is Backpatching in compiler design?

Backpatching involves filling in blanks with unclear information. Label information is provided here. In essence, it generates code by performing the relevant semantic activities. When constructing TACs for the supplied expressions, it may mention the Label's address in goto statements.

48) Is the compiler software or hardware?

49) Who compiles the compiler?

An assembler and machine code can be used to create a very basic compiler. You can use the initial compiler to create a more complex one once you have software that can convert data into binary instructions.

50) What is an example of a compiler?

51) What is a linker in compiler design?

When many object files (created by a compiler or an assembler) need to be combined into a single executable file, library file, or other "object" file, a linker or link editor is the computer system tool used to do so.