A linked list is a type of linear data structure consisting of nodes and a pointer to the node after them. Each node comprises data and a link, or reference, to the next node in the sequence. On the other hand, simple linked lists don't allow random access to data or efficient indexing by themselves. Therefore, it may be necessary to scan most or all of the list elements to perform many fundamental operations, locate a node containing a specific piece of information, or determine where a new node should go.

We'll cover the most frequently asked Linked List questions and answers for the candidates. Based on

Linked Lists are linear data structures, just like arrays. Instead of storing like an array, links between the elements of a linked list are made using pointers. A linear data structure that can store a collection of items is known as a linked list. The linked list can also be used to store various objects of related types. The list's elements or units are each represented by a node. Each node has its data as well as the address of the node after it. It resembles a chain.

2) How many types of Linked Lists exist?

Linked Lists come in a variety of types, including:

3) How do you represent a node in a linked list?

The simplest way to represent a node in a linked list is by wrapping the data and the connection in a typedef structure. The structure is then labeled as a Node pointer, indicating that it is a link in a chain.

The representation of a node in a linked list follows:

Similar forms of linear data can be stored in arrays, but arrays have the following limitations.

5) How many points are required to create a short linked list?

There are typically three kinds of pointers required to construct an essential linked list:

When each node in a linked list contains a pointer to the next node, the list is said to be singly linked. In this case, one possible route is represented by a list with exactly one link. There is only one way to get from the first node to the last one.

Pointers (links) to the next and previous nodes in the list are both parts of the doubly linked list. There are two possible names for the arrows connecting the nodes: "forward" and "backward," "next," and "prev" (previous). In the doubly linked list, each node has three fields: a link to the next node, an integer value, and a link to the node before.

To implement a doubly-linked list with only one link field per node, a method (known as XOR-linking) is used. However, this method requires an enhanced ability to perform specific operations on addresses, so it may not be accessible for specific high-level languages.

A linked list is a series of nodes linked together. A linear data structure that can store a collection of items is known as a linked list. The linked list can also be used to store various objects of related types.

10) How many pointers does a Singly Linked List need to be represented?

3) How many pointers do you need to make a simple Linked List work?

To create even the most basic linked list, you'll need three different kinds of pointers:

4) Linked List is a representation of which memory allocation method?

"dynamic memory allocation" is used when talking about linked lists.

5) What are the fundamental differences between Linked Lists and Arrays?

6) What graphical representation will you use for a linked list?

The data structure treats each item in a linked list as a separate entity. The items are kept in multiple places when you create a linked list. The elements of a Linked List are linked to one another via the pointers. Each node in a list contains two pieces of information: the data and a pointer (also called a link) to the next node in the sequence. The last node contains a reference to nothing. The "head" of a linked list is its starting node. It's important to remember that the head does not refer to a unique node but rather to the root. In this case, the head is treated as a null reference since the list contains no elements.

7) Which processes are involved in flattening a linked list?

Try the below steps that are involved in flattening a linked list are:

8) What are the few applications of the linked list?

Linked Lists are most commonly used for the following purposes:

9) How is a node added to the start of a singly linked list?

The following procedures must be carried out to move the node to the head of the list:

10) Describe the process for removing the first node from the singly linked list.

To remove the first link from a singly linked list:

1) How can a Java program traverse a linked list? 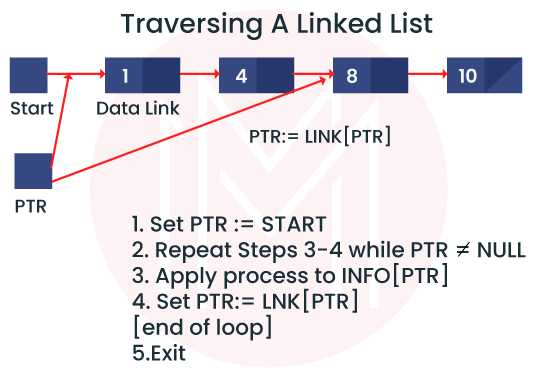 2) Mention some interfaces implemented by Linked List in Java.

Java Linked Lists support a variety of interfaces, some of which are more prominent are:

3) What is the time complexity of Linked List operations?

4) Why does the linked list delete and insert operation have the complexity of O(1)?

When inserting a node in the middle of a linked list, the assumption is that you are already at the address where the node must be inserted. Indexing is handled separately from other tasks. It means that while insertion is O(1), traveling to the middle node takes O(2) (n). If you have a reference, adding to a linked list doesn't require a traversal.

5) How to display a singly linked list from first to last?

To show the Singly Linked List from the beginning to the end,

7) How can we use Java's Stack to find the sum of two linked lists?

8) What is a Binary Search tree?

9) What is the program to add a node to the linked List?

10) How can data be inserted at the beginning of a singly linked list?

A new node must be created, inserted into the linked list by assigning the head pointer to the next pointer of the newly created node, and the head pointer must be updated to point to the new node. Put a temporary node first in the list if you need to.