Are you preparing for a design patterns interview? If yes, you’ve stumbled upon the right page. This post covers the latest and advanced design pattern interview questions for beginners and professionals. Have a read ahead. 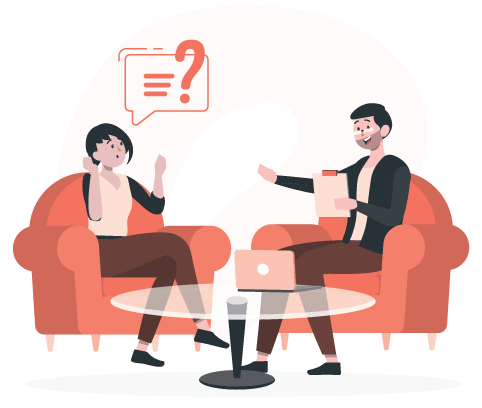 When it comes to solving common issues occurring in software development, like redundant functions, reusable patterns, repetitive code, etc., design patterns are used effectively. These are reusable template solutions that are much similar to customizable blueprints.

The concept of design patterns was first mentioned by Christopher Alexander. Later, it was picked up by four authors - Richard Helm, Ralph Johnson, John Vlissides, and Enrich Gamma - known as the Gang of Four.

With design patterns, you get to easily solve commonly recurring issues without investing a lot of time and effort into the same. So, if your job entails this process and you have an interview in tow, this post covers the latest design patterns interview questions that you can refer to for preparation.

We have categorized Design Patterns Interview Questions - 2022 (Updated) into 2 levels they are:

If you are just starting out in this domain, these design patterns interview questions for freshers will be helpful in your preparation.

Design patterns are known as reusable solutions that help solve commonly recurring issues of software development. Some of these issues are redundant logic and functions, repetitive code, and more. These patterns help save a significant amount of time and effort needed when developing software. Also, these patterns are used commonly in object-oriented software products.

As mentioned above, these design patterns are flexible enough to identify unwanted repetitive code. With this, the software’s architecture can be customized accordingly. Thus, some of the benefits of design patterns include:

3. How can a design pattern be described?

To describe a design pattern, the below mentioned things are generally followed:

4. Define the design patterns in Java. 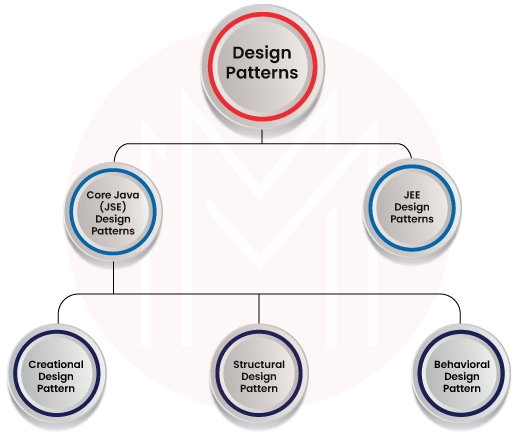 In Java, there are three varying types of design patterns, such as:

5. What do you mean by Gang of Four (GOF) in design patterns?

Gang of Four (GOF) is used for four authors who invented the concept of design patterns. They are John Vlissides, Richard Hel, Ralph Johnson, and Erich Gamma. They documented the design patterns in the book named “Design Patterns: Elements of Reusable Object-Oriented Software”, which was published in 1995.

6. What do you mean by SOLID principles? 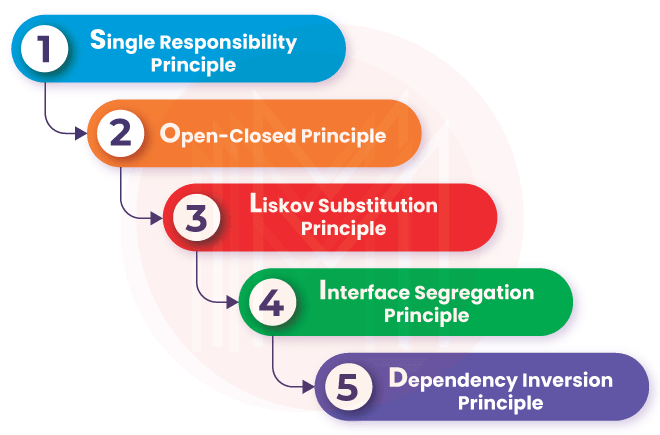 Introduced by Robert C. Martin in 2000 in his paperwork called “Design Principles and Design Patterns”, SOLID principles are the object-oriented principles. The SOLID acronym goes:

7. Define some design patterns used in the JDK library of Java.

Some of the design patterns used in the JDK library of Java are:

8. What is the difference between design patterns and design principles?

Design patterns are known as the reusable template solutions used for common issues that can be customized as per the requirements. These can be implemented efficiently, are safe to use and can be tested properly.

9. What is the difference between design patterns and algorithms? 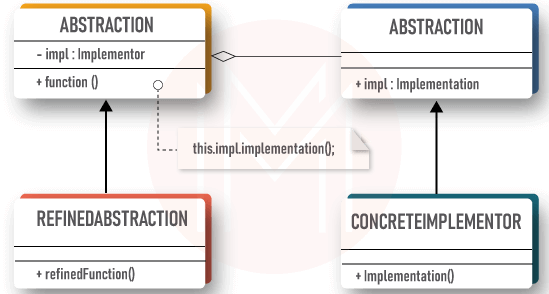 The bridge pattern is a structural design pattern type that allows you to split closely related classes or large classes into two hierarchies - implementation and abstraction. These two are independent of one another and can be used whenever you wish to decouple an abstraction from implementation.

This is known as a bridge pattern as it acts as a bridge between the implementation class and an abstract class. In this pattern, these classes can be modified or altered independently without impacting one another.

There are four primary elements of bridge pattern, such as:

If you are a professional and have spent years working in this domain, these design patterns interview questions for professionals will help you prepare thoroughly.

11. What do you mean by inversion of control?

Let’s dive deeper with an example. Suppose we have a class Y that uses class Z as:

Here, we get a dependency between the Y and Z classes. If the IoC pattern was implemented, the new operator wouldn’t have been used to assign value to the dependent variable. And then, it would have been:

The control of managing the dependency of instantiating the object of class Z to the IoC class IocZ has been inverted. 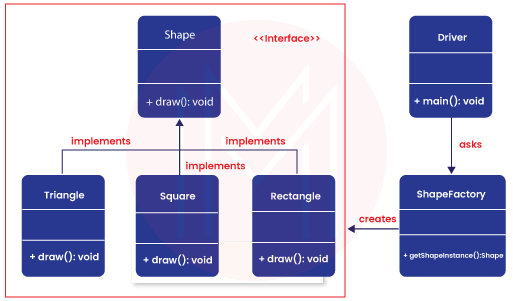 Factory design pattern comes under the Creational Design Patterns category. Herein, the objects get created without exposing the creation logic to the client. The objects are referred to the common interface.

Suppose there are three classes - Square, Rectangle, and Triangle. Let’s use factory patterns to create objects of these classes without bringing forth the creation logic by using the ShapeFactory class. Now, the Driver class will be used to pass the information to get the required object.

To integrate the factory design pattern, let’s follow these steps:

Now, the output of the implementation will be:

13. What is the Adapter Design Pattern? 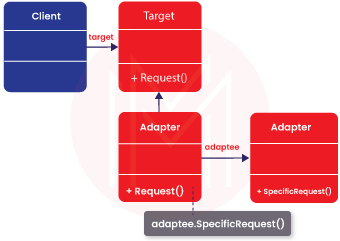 The adapter design pattern comes under the structural design pattern’s category that allows incompatible objects to collaborate. This one acts as a wrapper between two varying objects. The adapter gets a hold on the call for one object and transforms it to be recognized by the second object.

This adapter class comes with a client class and an adaptee class. While the former expects an object type, the latter provides the same feature by exposing a distinct interface. Now, to establish communication between the two, there is an adapter class.

The client uses the target interface to request the adapter. And then, the adapter class translates the request through the adaptee interface. The client, then, receives the results without having any idea of the role of an adapter.

To get deeper into this concept, let’s consider another example. Suppose you have a MediaPlayer Interface that is implemented by the AudioPlayer class. The AudioPlayer can play the format of mp3 by default. Let’s consider another interface, which is AdvancedPlayer, implemented by the MP4Player class that plays the mp4 formats. And then, there is a WAVPlayer that plays wav formats.

If you want the AudioPlayer class to play different formats, you will have to use the MediaAdapter class that implements the MediaPlayer interface and makes use of the AdvancedPlayer objects to play the needed format.

The code implementation of this situation will be:

The output of the code will be:

14. What do you mean by Decorator Design Pattern? 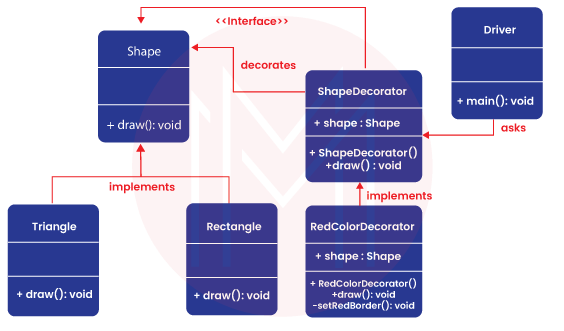 Decorator design patterns come under the structural pattern category that allows you to add new features to existing objects without altering the structure. This pattern creates a decorator class that works as a wrapper to the existing class by retaining the class methods’ signatures intact.

This pattern uses abstract classes as well as interfaces with composition to implement the wrapper. Mostly, they are used to apply the Single Responsibility Principle (SRP) as the functionalities are divided into classes with distinct concerns. In terms of structure, this pattern is similar to the chain of responsibility pattern.

Here are the steps to implement the decorator design pattern:

To understand better, let’s take an example. Let’s create a shape interface and concrete classes, Rectangle and Triangle, to implement the shape interface.

The output of the above-mentioned code will be: 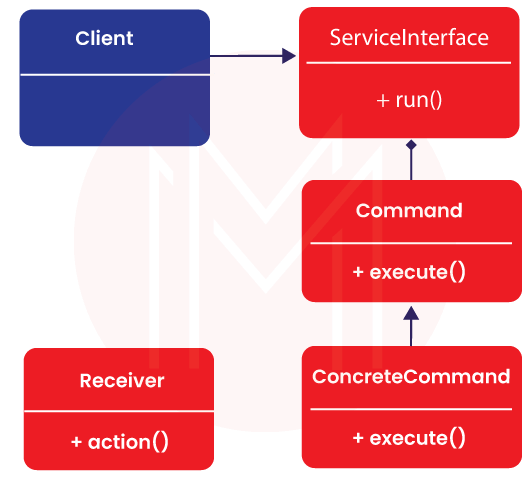 The command pattern is the type of behavioral design pattern that helps transform a request into a stand-alone object that comprises all of the details about that request. This one is a data-driven pattern as we use the information regarding the request by wrapping the same as an object, which is then passed to the invoker object in the form of a command.

Let’s understand it with an example of remote control that only has one button. Through this button, you can control the behavior of two objects - tubelight and a radio. Thus, the command design pattern will be used to command the handling of objects.

16. What problems does the Builder Pattern solve?

A builder pattern is a kind of creational design pattern that allows you to step-by-step construct complicated objects. The pattern allows you to produce varying representations of an object through the same logic of construction.

It assists in creating immutable classes with a large set of attributes. In the Factory as well as Abstract Factory Design Patterns, you come across these problems if the object has several attributes:

These issues can be solved through constructors of needed parameters. However, this creates a problem when new parameters will be added as parts of new requirements. This will result in inconsistency. That is where Builder is used.

This pattern helps solve the problem of a massive number of optional attributes and the inconsistent situation by offering a method to develop an object in a step-by-step methodology and return the final object through another method.

The following steps can help implement the builder pattern:

Let’s understand better with an example. Here, we have a user class and will build a UserBuilder class to develop objects of the user class.

The output of this code will be:

17. What is the method to accomplish thread-safe Singleton Patterns in Java?

A thread-safe singleton class is created to help object initialization in the presence of several threads. It can be done in several ways:

Enums are the easiest ways to create a thread-safe singleton class in Java as the synchronization support is internally done by Java. By default, Enums are finalized and help in averting several initializations during serialization.

They can also be created by developing the instance at the time of class loading. This can be achieved by using static fields as the Classloader guarantees the initialization of instances during class loading. Also, the instance is not visible until it has been created completely.

We can use the synchronized keyword upon the getInstance method as:

The only issue is that the performance gets affected in the presence of multiple threads because the entire method is synchronized.

Here, a synchronized block of codes will be used within the getInstance method rather than making the entire method synchronized. This makes sure that just a handful of threads will have to wait for the first time; thus, it doesn’t affect the performance.

18. Can you write a Java program to showcase the following pyramid design?

This design can be achieved through nested loops and calculatingly adding stars and spaces as shown below:

The output of this code will be:

19. Can you write a Java program to showcase the left triangle star pattern on the system console?

This can be accomplished through nested loops and calculatingly adding spaces and stars as shown below:

The output will be:

20. Can you write a Java program that can print diamond number patterns?

The output will be:

Design patterns make sure that the reusable solutions are tested adequately and implemented in a right manner to enhance the code flexibility and make a way to develop extendible and smart solutions that solve issues with ease. Now that you are finally preparing to appear for the interview, refer to these design patterns interview questions and get that well-deserving job.