C++ has been popular since the mid-1980s. It is the fourth most used programming language in the world, accounting for approximately 7.5 percent of the index. As a result, for a number of professions, a strong understanding of C++ is necessary. If you want to work in software development, you must be familiar with C++. It is in high demand due to its dependability, performance, and efficiency. So, now that you understand the significance of C++, this blog will address the most often asked interview questions in C++ to help you ace the interview and land a well-paying job.

We have categorized CPP Interview Questions - 2022 (Updated) into 3 levels they are:

If you're applying for a Fresher role, you need to become familiar with these basic CPP Interview Questions first.

C++, an object-oriented programming language was designed by Bjarne Stroustrup, in 1985, it was released. C++ is a superset of C, with the exception of classes, which are present in C. Stroustrup dubbed the new language "C with Classes" at first. After a while, though, the name was changed to C++. C++ was inspired by the C increment operator ++.

The class is a data type that has been defined by the user. The term class is used to declare the class. The data members and member functions are contained in the class, and their access is controlled by the three modifiers: private, public, and protected. The type definition of the category of objects is defined by the class. It defines a datatype, but not the data itself; rather, it determines the data's structure.

C++ not only maintains all features of the C language but also improves virtual memory and introduces a myriad of benefits, such as:

A token is the smallest element of a programme that the compiler can understand. Tokens are categorised as follows:

5. What are the different data types present in C++?

There are 4 Data types present in C++, they are

6. What is Data binding and Abstraction?

Data Binding: Data binding is the method of constructing a link between both the application's user interface and the information it shows. If the binding has the correct parameters and the information provides the appropriate notification, whenever the data has changed its value, the components that are connected to it instantly adapt to the change.

7. What is the difference between C and C++?

A class's instance is an object. Because a class is a user-defined data type, it's possible to refer to an object as a variable of that data type.

In C++, you can specify a class by using the term class followed by an identifier (class name). The body of the class is defined inside curly brackets. It comes to an end with a semi-colon.

10. What are the different types of Operators in C++?

11. Explain what are the characteristics of Class Members in C++?

12. Discuss the difference between prefix and postfix.

13. What is the difference between equal to (==) and assignment operator(=)?

The '==' operator determines whether or not the two operands are equal. If this is the case, it returns true. Otherwise, false is returned.
For example,

The assignment operator "=" assign the right-hand value to the left-hand variable.
For example,

14. What is the difference between struct and class?

Polymorphism is defined as the presence of several forms. Its function depends greatly upon the circumstances. While we have several classes which are connected to each other through inheritance, this happens.

Consider a base class named car, which has a method called car brand (). Mercedes, BMW, and Audi are examples of derived automobile classes, and each has its own implementation of a car.
Polymorphism has two types, 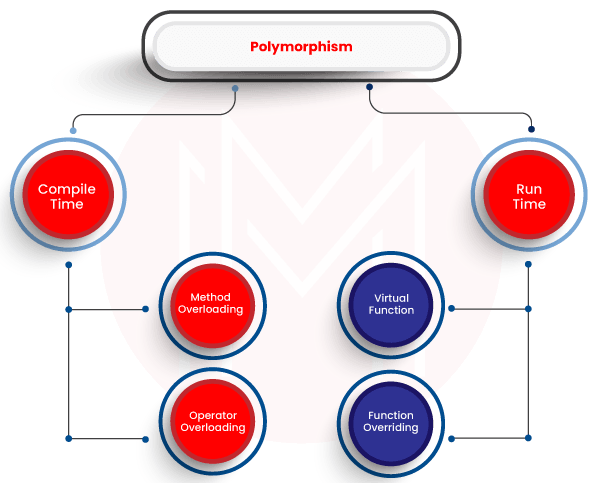 16. What is operator overloading?

Operator overloading is a necessary component for performing operations on user-defined data types. We can change the default meaning of operators like +, -, *, /, =, and so on by overloading them.
For example,
Using operator overloading, the following code adds two complex numbers:

17. What is the difference between reference and pointer?

C++ has three access modifiers: public, private, and protected. Data hiding is one of the most important characteristics of object-oriented programming languages like C++. Data hiding refers to limiting access to a class's data members.

19. Define the basic type of the variable used for a different condition in C++

In C++, a variable is used for a variety of circumstances.

Now it's time to ramp up the difficulty, we've covered the CPP Interview Questions for advanced candidates in the below questions.

When an object is created for the first time, the function Object() { [native code] } is automatically invoked. Similarly, when an object is destroyed, a destructor function is automatically invoked. A destructor is preceded by a tilde and has the same name as the function Object() { [native code] } (which is the same as the class name).

The various OOPs Concepts in C++,

25. What is the purpose of the "delete" operator?

26. What is the difference between delete and delete[]?

Call by value: We transmit a copy of the parameter to the functions when using the call by value approach. A new memory is assigned to these duplicated values, and changes to these values do not affect the variable in the main function.

Call by reference: We supply the address of the variable to the call by reference technique, and the address is utilised to retrieve the actual argument used in the function call. As a result, changes to the parameter affect the passing argument.

29. What is an inline function?

If a function is inline, the compiler stores a copy of the function's code at each point where it is called during compile time. One of the most significant advantages of using an inline function is that it avoids the overhead of calling a regular function.

30. Explain how functions are classified in C++?

In C++ functions are classified as

31. What is a scope resolution operator?

The:: (scope resolution) operator qualifies concealed names so they can be utilised. If an explicit declaration of the same name in a block or class obscures a namespace scope or global scope name, you can use the unary scope operator.

32. What is function overloading?

STL is derived as Standard Template Library. In C++, the default namespace standard is Std.

36. What do you know about friend class and friend function?

37. What are the characteristics of a friend function?

38. Which operations are permitted on pointers?

The operations that can be performed on pointers are as follows:

There are two types of increment pointers:

Subtracting a pointer from another pointer: The number of elements existing between two members of an array is returned when two pointers pointing to the members of the array are subtracted.

39. What is the difference between an array and a list?

40. Discuss the difference between new and malloc

This section contains questions to help experienced candidates demonstrate their breadth of expertise to the CPP Interviewer.

41. What is an abstract class and when do you use it?

An abstract class is one that has no objects that can be created. As a parent for the derived classes, such a class exists. By including a pure virtual function in a class, we can make it abstract.

42. What is an overflow error?

Whenever a program is provided a number, value, or variable that it cannot manage, an overflow error occurs. This is a common programming mistake, collaborating with integer or even other numerals.

The act of creating new classes, known as derived classes, from existing classes is referred to as inheritance. Base classes refer to the pre-existing classes. Derived classes inherit all of the capabilities of the base class, but they can add their own features and enhancements.
Example: 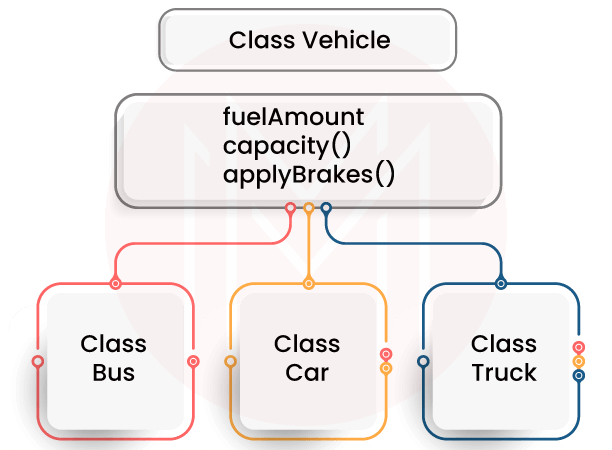 The properties of Class Vehicle are passed down to Class Bus, Class Car, and Class Truck. The most significant aspect of inheritance is that it allows for code reuse.

When a single object behaves in multiple ways, it is called overloading. Even if two objects have the same name, they execute different functions.

C++ allows you to define multiple definitions for the same function name or operator within the same scope. Overloading is a term that refers to the same thing as function overloading.
Overloading is of two types: 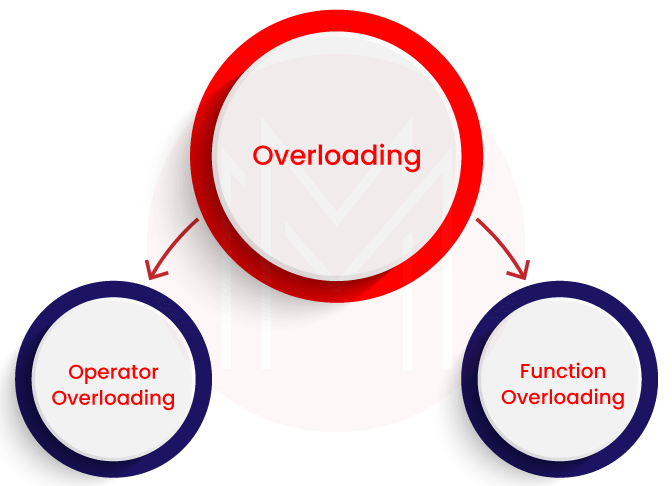 The Standard Template Library (STL) is a set of C++ template classes that would provide commonly used programming data structures and operations, such as lists, stacks, and arrays. It's an algorithm, iterator, and container class library.

46. What are the methods of exporting a function from a DLL?

There are two approaches:

47. Explain what is C++ exceptional handling?

The practice of handling runtime faults in C++ is known as exception handling. We handle exceptions so that the application's usual flow can be preserved even when runtime issues occur. An exception in C++ is a run-time event or object. The std::exception class is where all exceptions are derived.

48. Mention what are the types of Member Functions?

The types of member functions are

49. What is a copy constructor?

50. Mention what are the decision-making statements in C++? Explain if statement with an example?

The decision making statements in C++ are

For example, we want to use C++ to implement an if condition.

A virtual function is a base class member function which may modify in a derived class. The keyword virtual is used to declare it.
Example:

A pure virtual function is one that has no implementation and is declared by setting the value to 0. It doesn't have a body.
Example:

The value 0 is not allocated to anything, and the = sign has no bearing on the assignment. Its sole purpose is to inform the compiler that a function will be pure and will not contain anyone.

53. What are void pointers?

A void pointer is a pointer that doesn't have a datatype attached to it. It may store any form of address.

We can assign any type of pointer to a void pointer, but we can't do the opposite unless we typecast it as void.

54. How do you allocate and deallocate memory in C++?

55. What is a virtual destructor?

56. What should be the output of the below code?

Explanation:  Ternary operator is used, the value of a is less than b which violates the condition that is why 6 is the answer

57. Define the Local and Global scope of a variable.

Global variables are useful for data that are relatively constant or that must be accessed by multiple functions in the script, such as a session id. A local variable, on the other hand, has a limited scope: it only exists within the block in which it was defined. The variable is destroyed and its values are lost once that block ends.

59. Can we call a virtual function from a constructor?

Upcasting is the process of transforming a derived-class pointer or reference to a base class. To look at it another way, one can consider a derived type as though it were its base type by upcasting it. Public inheritance is always allowed when no explicit type cast is used.

You should have gained an understanding of numerous important CPP topics after reading this blog. We hope you got a sense of output-based questions, programming questions, and conceptual questions.
If u have any queries feel free to ask in the comment box below.