Apache Airflow is an open-source workflow authoring, scheduling, and monitoring application. It's one of the most reliable systems for orchestrating processes or pipelines that Data Engineers employ. This tutorial will walk you through some of the basic Airflow ideas, how they function, and how to use them.

If you work closely in Big Data, you are most likely to have heard of Apache Airflow. It commenced as an open-source project in 2014 to help companies and organizations handle their batch data pipelines. Since that time, it has turned to be one of the most popular workflow management platforms within the domain of data engineering.

Written in Python, Apache Airflow offers the utmost flexibility and robustness. It simplifies the workflow of tasks with its well-equipped user interface. So, if you are looking forward to learning more about it, find out everything in this Apache Airflow tutorial.

What is Apache Airflow?

Apache Airflow is one significant scheduler for programmatically scheduling, authoring, and monitoring the workflows in an organization. It is mainly designed to orchestrate and handle complex pipelines of data. Initially, it was designed to handle issues that correspond with long-term tasks and robust scripts. However, it has now grown to be a powerful data pipeline platform.

Airflow can be described as a platform that helps define, monitoring and execute workflows. In simple words, workflow is a sequence of steps that you take to accomplish a certain objective. Also, Airflow is a code-first platform as well that is designed with the notion that data pipelines can be best expressed as codes.

Apache Airflow was built to be expandable with plugins that enable interaction with a variety of common external systems along with other platforms to make one that is solely for you. With this platform, you can effortlessly run thousands of varying tasks each day; thereby, streamlining the entire workflow management.

Why Use Apache Airflow?

You can easily get a variety of reasons to use apache airflow as mentioned below:

Moving forward, let’s explore the fundamentals of Apache airflow and find out more about this platform.

Herein, workflows are generally defined with the help of Directed Acyclic Graphs (DAG). These are created of those tasks that have to be executed along with their associated dependencies. Every DAG is illustrating a group of tasks that you want to run. And, they also showcase the relationship between tasks available in the user interface of the Apache Airflow. Let’s break down DAG further to understand more about it:

One thing that you must note here is that a DAG is meant to define how the tasks will be executed and not what specific tasks will be doing. 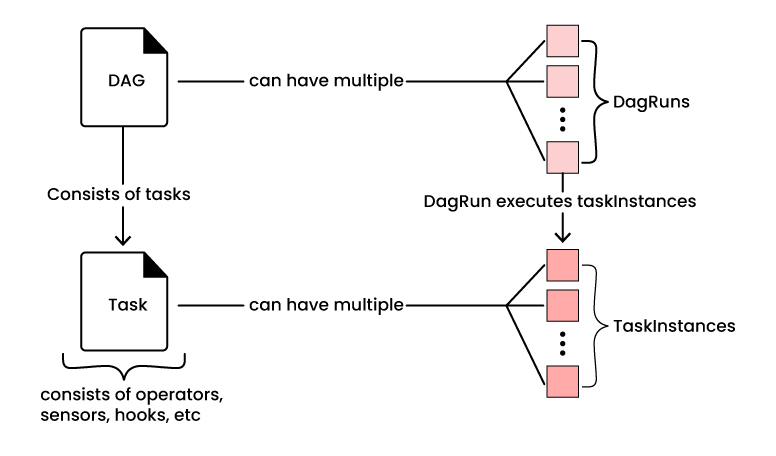 Basically, when a DAG gets executed, it is known as a DAG run. Let’s assume that you have a DAG scheduled and it should run every hour. This way, every instantiation of the DAG will establish a DAG run. There could be several DAG runs connected to one DAG running simultaneously.

Tasks vary in terms of complexity and they are operators’ instantiations. You can take them up as work units that are showcased by nodes in the DAG. They illustrate the work that is completed at every step of the workflow with real work that will be portrayed by being defined by the operators.

In Apache Airflow, operators are meant to define the work. An operator is much like a class or a template that helps execute a specific task. All of the operators are originated from BaseOperator. You can find operators for a variety of basic tasks, like:

These operators are generally used to specify actions that must be executed in Python, Bash, MySQL, and Email. In Apache Airflow, you can find three primary types of operators:

Hooks enable Airflow to interface with third-party systems. With them, you can effortlessly connect with the outside APIs and databases, such as Hive, MySQL, GCS, and many more. Basically, hooks are much like building blocks for operators. There will be no secured information in them. Rather, it is stored in the encrypted metadata database of Airflow.

Between tasks, airflow exceeds at defining complicated relationships. Let’s say that you wish to designate a task and that T1 should get executed before T2. Thus, there will be varying statements that you can use to define this precise relationship, like:

How does Apache Airflow Work? 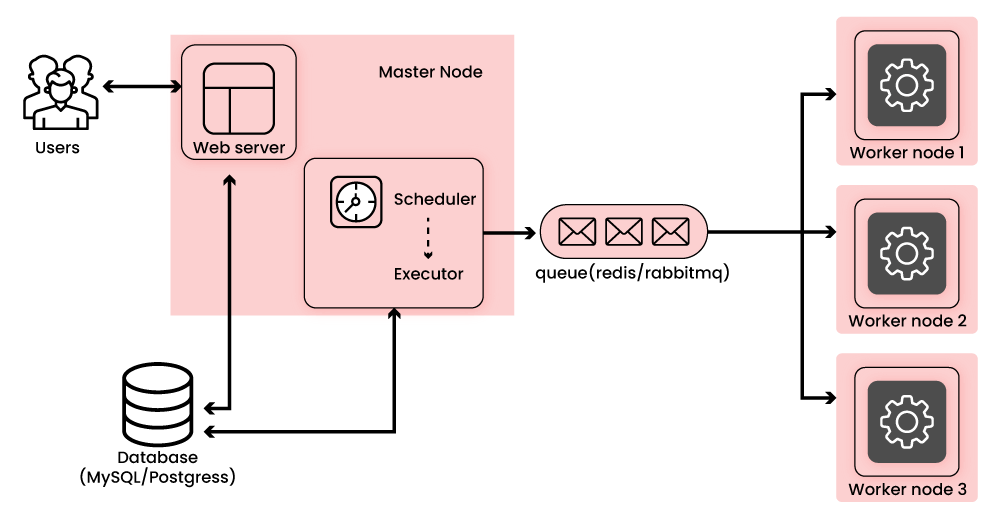 To understand how does Apache Airflow works, you must understand there are four major components that create this scalable and robust workflow scheduling platform:

Airflow evaluates all of the DAGs in the background at a specific period. This period is set with the help of processor_poll_interval config and equals one second. Once a DAG file is evaluated, DAG runs are made as per the parameters of scheduling. Then, task instances are instantiated for such tasks that must be performed and their status is changed to SCHEDULED in the metadata database.

The next step is when the schedule questions the database, retrieves tasks when they are in the scheduled state, and distributes them to all of the executors. And then, the task’s state changes to QUEUED. The queued tasks are drawn from the queue by executors. When this happens, the status of the task is changed to RUNNING.

Once a task is finished, it will be marked as either finished or failed. And then, the scheduler will update the final status in the database.

Apache Airflow can be installed with pip through a simple pip install apache-airflow. You can either use a separate python virtual environment or install the same in the default python environment.

If you wish to use the conda virtual environment, you will have to:

Now, you will have a working Airflow installation. Alternatively, you can install Airflow manually as well by running:

While installing Apache Airflow, keep in mind that since the release of the 1.8.1 version, Airflow is now packaged as apache-airflow. Make sure that you are installing extra packages correctly with the Python package. For instance, if you have installed apache-airflow and don’t use pip install airflow[dask], you will end up installing the old version.

Now that the installation is complete, let’s have an overview of the Apache Airflow user interface. Here are some of the components that you will get in the interface:

It is the default view that lists all of the DAGS available in the system. With this view, you will get a summarized view of DAGS, such as how many times a specific DAG ran successfully, how many times it failed, the last execution time, and more. 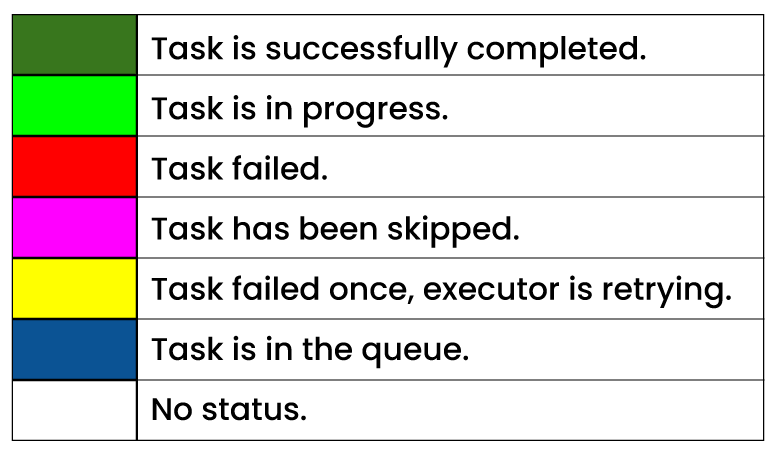 The tree view represents the DAG as well. If you think that your pipeline is taking a long to execute, you can check out which exact part is taking time and work on it with this view.

Under this view, you can easily compare the tasks’ duration at varying time intervals. You can also optimize the algorithms and compare the performance here.

In this specific view, you can view the code quickly and see what was used to generate a DAG.

Now that you have understood the basics in this Apache Airflow tutorial, get started without any delay. Keep in mind that an ideal method to learn everything about this tool is to build with it. Once you have downloaded Airflow, you can either contribute to an open-source project on the internet or design one of your own.