SQLite is the most extensively used SQL database engine globally. This SQLite tutorial covers both fundamental and advanced topics of SQLite which are useful for both beginners and experienced.

SQLite is an open-source, self-contained, zero-configuration, and stand-alone transaction relational database engine that is designed to be integrated into an application. This tutorial will get you up and running with SQLite quickly,  and get you acquainted with SQLite programming.

SQLite is an embedded database management system i.e., based on relational databases. It's a self-contained transactional SQL database engine that's serverless and requires no configuration. SQLite can be used for both commercial and personal purposes. To put it another way, "SQLite is an open-source, zero-configuration, stand-alone, transaction relational database engine designed to be embedded within an application."

SQLite is distinguished from other SQL databases by the lack of a separate server process. It is capable of reading and writing to conventional disc files. A complete SQL database, comprising many tables, indices, triggers, and views, is included in a single disc file.

Self-contained, serverless, zero-configuration, and transactional are some of SQLite's notable features.

1. Serverless: The majority of SQL database engines are run as a separate server process. Interprocess communication (usually TCP/IP) is used by programmes that want to access the database to send requests to the server and get responses. This isn't how SQLite works. The process that needs to access the database uses SQLite to read and write straight from the database files on the disc. There is no need for a server to act as an intermediary.

Being serverless has both benefits and drawbacks. The key benefit is that there is no need to install, establish, configure, initialize, administer, or debug a separate server process. SQLite is a "zero-configuration" database engine for this reason. SQLite-based programmes do not require any administrative assistance to set up the database engine before they can be run. An SQLite database can be used by any programme that can access the disc.

A database engine that uses a server, on the other hand, can provide stronger protection against flaws in the client application since stray pointers in the client cannot destroy memory on the server. Furthermore, because a server is a single permanent process, it can more precisely restrict database access, allowing for finer grain locking and improved concurrency.

The majority of SQL database engines are client/server. SQLite is the only serverless database that this author is aware of that permits many programs to access the same database at the same time.

2. Self-Contained: SQLite is self-contained, requiring only the most basic operating system and library support. Embedded gadgets like iPhones, Android phones, gaming consoles, and portable media players can now use SQLite.

In ANSI-C, SQLite was created. The source code for sqlite3.c and its header file sqlite3.h is available in a large sqlite3.c and sqlite3.h file. Simply drop these files into your project and compile them with your code if you want to build an SQLite-based application.

3. Zero-configuration: Before SQLite can be used, it does not need to be "installed." There is no such thing as a "setup." It is not necessary to start, stop, or configure any server processes. An administrator does not need to establish a new database instance or provide users access permissions. There are no configuration files used by SQLite. To notify the system that SQLite is running, nothing needs to be done. After a system crash or a power outage, no action is necessary to recover. Nothing needs to be fixed.

SQLite is a simple and effective database management system. Once you get them up and running, other, more well-known database engines perform admirably. However, setting up and configuring the system for the first time might be daunting.

4. Transactional: A transaction is a logical unit of work executed against a database. Transactions are logically ordered units or series of work completed by a user or dynamically by a database application.

A transaction is when one or more database updates are propagated. When you create, update, or delete a record from a table, you are completing a transaction on the table. To preserve data integrity and resolve database issues, it's critical to keep track of transactions.

All updates and queries in a transactional database seem to be Atomic, Consistent, Isolated, and Durable (ACID). Even though the transaction is stopped by a programme crash, an operating system crash, or a power outage, SQLite supports serializable transactions that are atomic, consistent, isolated, and persistent.

We repeat and build on the previous sentence for emphasis: Even if the act of writing the alteration to the disc is halted, all modifications in SQLite occur either completely or not at all during a single transaction.

The claim in the preceding paragraph is thoroughly tested in the SQLite regression test suite, which uses a specialized test harness to simulate the impact of operating system crashes and power outages on a database file.

SQLite comes with a number of tools for working on a variety of systems, including Windows, Linux, and Mac. To download, you must first choose the right version.

To work with SQLite on Windows, for example, you'll need to download the command-line shell software, as illustrated in the screenshot below.

The downloaded file is in ZIP format and is relatively small in size.

SQLite is easy to set up and use.

To begin, open a command prompt and navigate to the C:sqlite directory.

Next, at the sqlite> prompt, execute the. help command to get a list of all sqlite3 commands.

Fourth, you must use the. quit command to terminate sqlite>:

However, you might wish to use an intuitive GUI tool to interact with SQLite databases on occasion.

There are a variety of graphical interfaces for managing SQLite databases, ranging from freeware to commercial licensing.

SQLiteStudio is a free graphical user interface (GUI) application for maintaining SQLite databases. It's open-source, portable, user-friendly, and cross-platform. The SQLite tool also includes several of the most significant SQLite database functionalities, such as importing and exporting data in a variety of formats, including CSV, XML, and JSON.

The SQLiteStudio installer or portable version can be downloaded from the download page. After that, extract (or install) the download file to a folder, such as C:sqlitegui, and run it.

The following diagram depicts how to start SQLiteStudio: 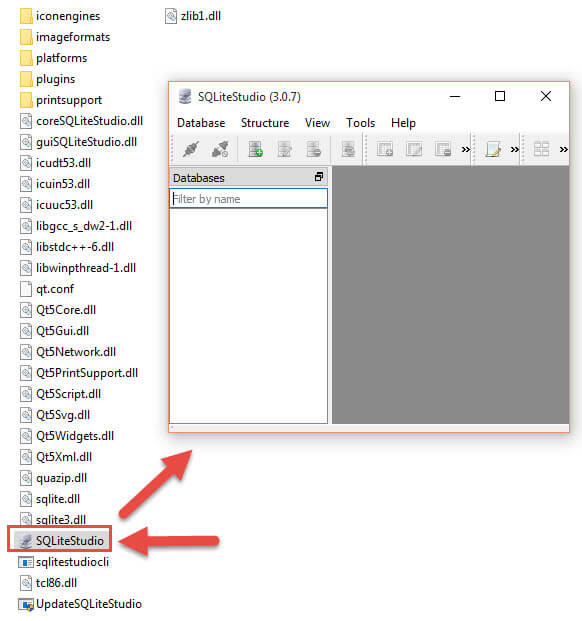 Commands in SQLite are identical to SQL commands. SQLite instructions are divided into three categories:

1. Data Definition Language (DDL) is a programming language that allows you to define data.

3. Data Query Language (DQL) is a programming language that allows you to ask questions about data.

A collection of SQLite dot commands is shown below. A semicolon is not used to end these commands (;)

Use the ".help" command to see a list of dot commands at any moment. 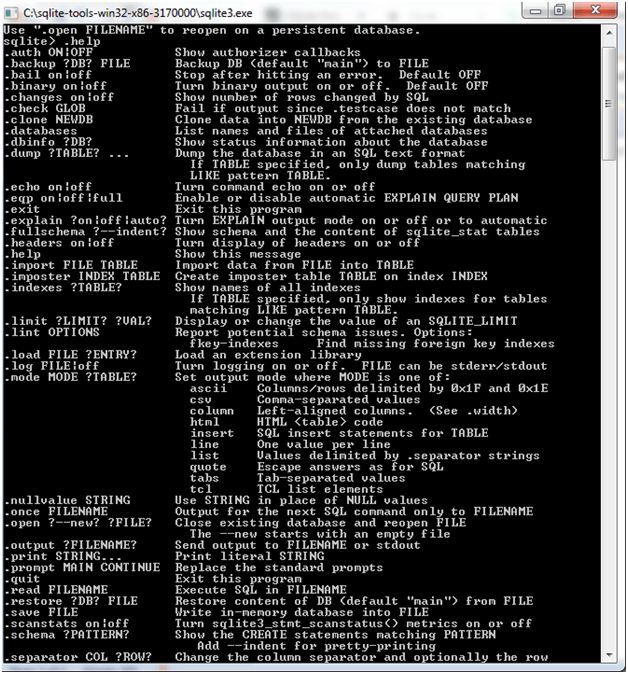 The following is a list of significant SQLite dot commands. In the table below, you'll find a list of commands with descriptions:

To check the default settings of your SQLite command prompt, use the.show command.

To format your output, you'll need to utilize a couple of dot commands. The following are the instructions:

Syntax is a set of principles that SQLite adheres to. The basic SQLite syntax is listed in this chapter. Sensitivity to individual circumstances.

Case Sensitivity: The crucial thing to remember is that SQLite does not care about the case, so the words GLOB and glob in SQLite statements have the same meaning.

SQLite Statements: All SQLite statements begin with SELECT, INSERT, UPDATE, DELETE, ALTER, DROP, and other keywords. A semicolon will be used to terminate the statement (;).

SQLite NOT IN Clause

Any object's data type is specified using SQLite data types. SQLite assigns a data type to each column, variable, and expression. When making a table, several data kinds are used. The dynamic type system in SQLite is more general. A value's data type is associated with the value itself, not with its container, in SQLite.

The following storage classes apply to the stored values in an SQLite database:

Column type affinity is supported by SQLite. Each column still can store any form of data, but its affinity is the recommended storage class for that column.

In an SQLite3 database, the below type affinity is utilised to assign.

The names of several data types that can be utilized when building SQLite tables are listed below.

SQLite operators are restricted words or characters that are utilized in SQLite queries when the WHERE clause is used to conduct operations such as comparisons and arithmetic.

In SQLite statements, operators can be used to describe conditions and as conjunctions for multiple conditions.

The various arithmetic operators in SQLite are listed in the table below. There have two variables "a" and "b" in this table, each with a value of 50 and 100.

The comparison operators available in SQLite are listed in the table below. We have two variables "a" and "b" in this table, each with a value of 50 and 100.

The logical operators in SQLite are listed below:

The truth table for Binary AND (&) and Binary OR (|) can be found here:

We already have a table named "STUDENT" that has the following information:

Refer to this simple example of SQLite Boolean expression.

There are various built-in functions in numerical expressions, such as average(), sum(), count(), and so on. Aggregate data calculation functions are what these functions are called.

SELECT COUNT(*) AS "RECORDS" FROM STUDENT;

The fundamental distinction between SQL and SQLite is that SQL stands for Structured Query Language and is a database query language. SQLite is a lightweight database. It might be conceivable to add an extension to the database-accessing computer language.

Differences between SQL and SQLite

SQLite is a well-known database that has been used effectively with on-disk file formats for a variety of desktop applications, including version control, economic analytical techniques, multimedia cataloging and editing suites, CAD packages, and record-keeping programmes, to mention a few.

We’ve reached to the end of the blog. We've covered all of the essentials of SQLite in this tutorial. We hope  this blog has helped you gain a better understanding of the subject. If you have any questions, please leave a comment below and we will respond as soon as possible.