ExpressJS evolved as a leading backend framework for web application development. Since it provides a wide range of functionality, it has become the top option for application development among developers all over the world. This Express.js tutorial will walk you through all the essential topics of the Express to help you get started with it.

One of the first steps in building any web application is choosing a powerful backend technology. Although a few technological trends are gaining popularity, there can never be a one-size-fits-all solution. A backend technology may be adopted depending on the type of company, the development methodologies, and the target market.

To help you out, we have detailed one of the leading backend technologies - ExpressJS. Based on its standard features and functionality, this tutorial will give you a complete insight into the fundamentals of ExpressJS.

So, let's get started!

ExpressJS or Express is an open-source and free server-side framework for Node.js. It was written in Javascript and is included in the MEAN, MEVN, and MERN stacks. Express provides middleware packages, routing capabilities, template code, and plugins for simplified web development.

Popular apps that use Express as a backend technology include:

In June 2014, StrongLoop acquired project management rights. IBM said in January 2016 that ExpressJS would now be under the control of the Node.js Foundation incubator after purchasing StrongLoop in September 2015.

To install Express, first, you must ensure that Node.js is installed in your system. After that, create a project directory to hold your application's project dependencies and make that your working directory.

Use the below command to create a package.json file for your application.

This command drives you to numerous things like the name and version of your app. For now, you can simply hit RETURN to accept the defaults for most of them with the following exception:

Now, you can install Express globally using the following command:

If you wish to install Express temporarily and not add it to the dependencies list, use the below command:

Now that you are done with the installation of Express JS. Let's get into the fundamental concepts of the Express framework.

In Express JS, Routing determines an application's response to the client's request to a specific endpoint, a URI (or path), and a specific HTTP request method.

Each route contains one or more handler functions and is executed when the route is matched.

Following is the structure of Routing:

You can use four HTTP methods within the request. These methods help in identifying the function made by the user. Let's learn about each HTTP method in detail:

The following example illustrates the usage of all HTTP methods:

In Express, Middleware functions are the functions that have access to the response object (res) and request object (req), along with the following function in the application's request-response cycle.

The following function is a function that, when invoked, operates the Middleware succeeding the existing Middleware.

The Middleware performs the following tasks:

The below image illustrates the elements of a middleware function call:

An Express application can use the following types of Middleware:

You can use application-level Middleware to access an app object's instance using the app.use() and app.METHOD() functions, where METHOD is the HTTP request method that handles middleware functions like GET, POST, or PUT in lowercase.

The following examples depict a middleware function with no mount path. For every request made by the app, this function is executed.

The below example displays a middleware function mounted on the /user/:id path.

This Middleware works exactly as application-level Middleware, except it is bound to an instance of Express.Router().

The following is an example of Router-level Middleware:

Following are the built-in middleware functions of Express:

To give Express apps more functionalities, use third-party Middleware.

Install the Node.js module, then load it into your project at the router or application level.

The following example demonstrates how to install and load the cookie-parsing using Middleware:

The template engine's primary function is enabling the application's status template file usage. It replaces variables with actual values in a template file and modifies the template into an HTML file transferred to the client. This approach makes designing HTML pages easier.

Mustache, Pug, and EJS are some popular template engines that work with Express. By default, the Express generator uses Jade, along with others.

The process of catching and processing errors synchronously and asynchronously in Express is called Error Handling. By default, Express comes with support for the error handler, so you don't need to write your own to get started.

You can set the debugging environment using the following command -

By default, running this command generates the following output:

While working with REST APIs, to accomplish any specific task, you must have seen that you need to work with various kinds of files such as CSS, HTML, etc. But managing and maintaining such files becomes a hassle.

Thus Express provides a solution called Scaffolding. It allows us to create a structure for a web app and manage the files in proper directories. You can use Scaffolding to create a skeleton for an Express application. Yeoman, Express-generator, etc., are some of the tools supported by Express.

Now, let's understand how to create an essential structure for an application.

Before you use the express-generator, you need to install it. Use the following code in the command prompt for the same.

Now Express-generator is ready to create the project skeleton. Enter the below command.

Once you hit enter, you can see the following output displayed in the below screenshot. 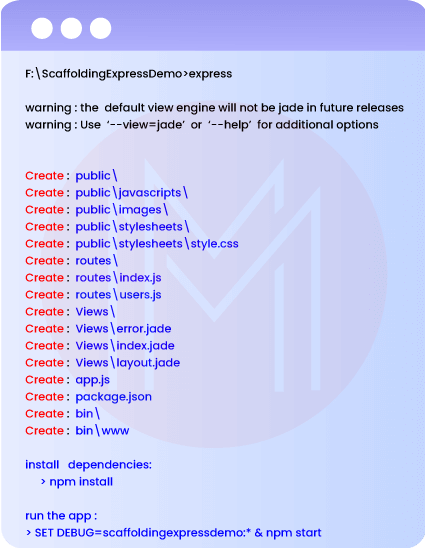 Small files or data sent to the client with a server request and stored on the client side are called cookies. Cookies help us in keeping track of users' actions.

In Express, cookie-parser Middleware is needed to use cookies.

Use the following code to install it -

Cookie-parser is a middleware that parses the cookie attached to the client request object. Use the following code to use the index.js file.

To fill req.cookies with an object keyed by the cookie names, cookie-parser first parses the Cookie header. Let's define a new route in your Express app so that we may set a new cookie like this:

Just open your browser, launch the console, and type to verify whether or not your cookie has been set.

Every time the browser queries the server, cookies are also sent. In a route, add the following code to view cookies from your server on the server console.

You will get the output below the next time you send a request to this route.

Since HTTP is stateless, you must figure out how to preserve user data across requests to connect any two queries. Data transfer between clients and servers is accomplished using cookies and URL parameters. Though you may read them, they are on the client side. Sessions cover this topic in detail. For all subsequent requests, the client uses the ID you provide. Information about the client is stored on the server associated with this ID.

Use the following code to install the Express session since it is required.

We will set up the Middleware for the session and cookie-parser. MemoryStore, the standard store for storing sessions, will be used in this example. Never use this in a setting that is in production. The session middleware takes care of everything, including establishing the session cookie and constructing the session object in the request object.

We will have their session information on file whenever we receive a request from the same client again. The session object can have additional features added. We'll establish a view counter for a client in the following example.

The code above sets up a new session for the user and assigns them a cookie whenever they visit the website.

With this, we have come to the end of this ExpressJS tutorial. We hope we have explained ExpressJS's core concepts from the ground up.

Let us know if you have any questions by leaving a comment below.