Node.js came into existence when the developers were already using javascript. It is something that is used only to run inside the browser and runs on user's machines as a standalone process. This means that users can create applications by utilizing javascript outside the context of the browser. Node.js has a better feature set when compared with JavaScript, and it is similar to other programming languages like Python, Java, PHP, etc.

A Complete Guide for Node.js

Node.js is an open-source, cross-platform server environment, and it enables users to run javascript on the server. JavaScript users can make use of the Node.js environment to deploy the language for scripting on the server-side, while also running scripts to generate the dynamic web page content.

With node.js web development, event-driven programming methods can be implemented. It also has APIs which are helpful in making interactions with I/O devices. These APIs are used in the development of distributed web applications and high-performance web servers.

Ryan Dahl has created node.js in 2009 with its initial release developed to support operating systems like Linux and Mac OS X, and later in 2011, the support for windows was added.

Why is Node.js popular?

Node.js is widely used because of its large, open-source, active, javascript based ecosystem. According to a survey conducted by StackOverFlow in 2018, Node.js is considered as the most widely used development frameworks and JavaScript remains at the top as the most popular language in the table of programming, scripting, and Markup languages.

Node.js, Javascript, and Python are advancing quickly, whereas languages like PHP and C# are gradually falling out of interest. In the end, JavaScript loses only to Python and remains in second place among the list of most wanted programming languages. Both these languages are competing with each other leaving others behind. And in the case of most popular frameworks, Node.js takes the first place.

What is Node.js used for?

Node.js is basically used for non-blocking, event-driven servers because of its single-threaded behaviour. It is particularly used for traditional websites and back-end application programming interface services. It is designed with real-time and pushed back architectures.

You can download the latest version (10.15.3) of Node.js source code here

How node.js processes a file request?

This section shows how Node.js handles a file request through the following steps:

Step1: Pushes the task to the file system of a computer.

Step2: Waits for the next request.

Step3: After the file system has opened and read the file, the server returns the information to the client.

Node.js does not wait, and simply accepts the next request. It runs single threaded, asynchronous programming, non-blocking, which is memory efficient. 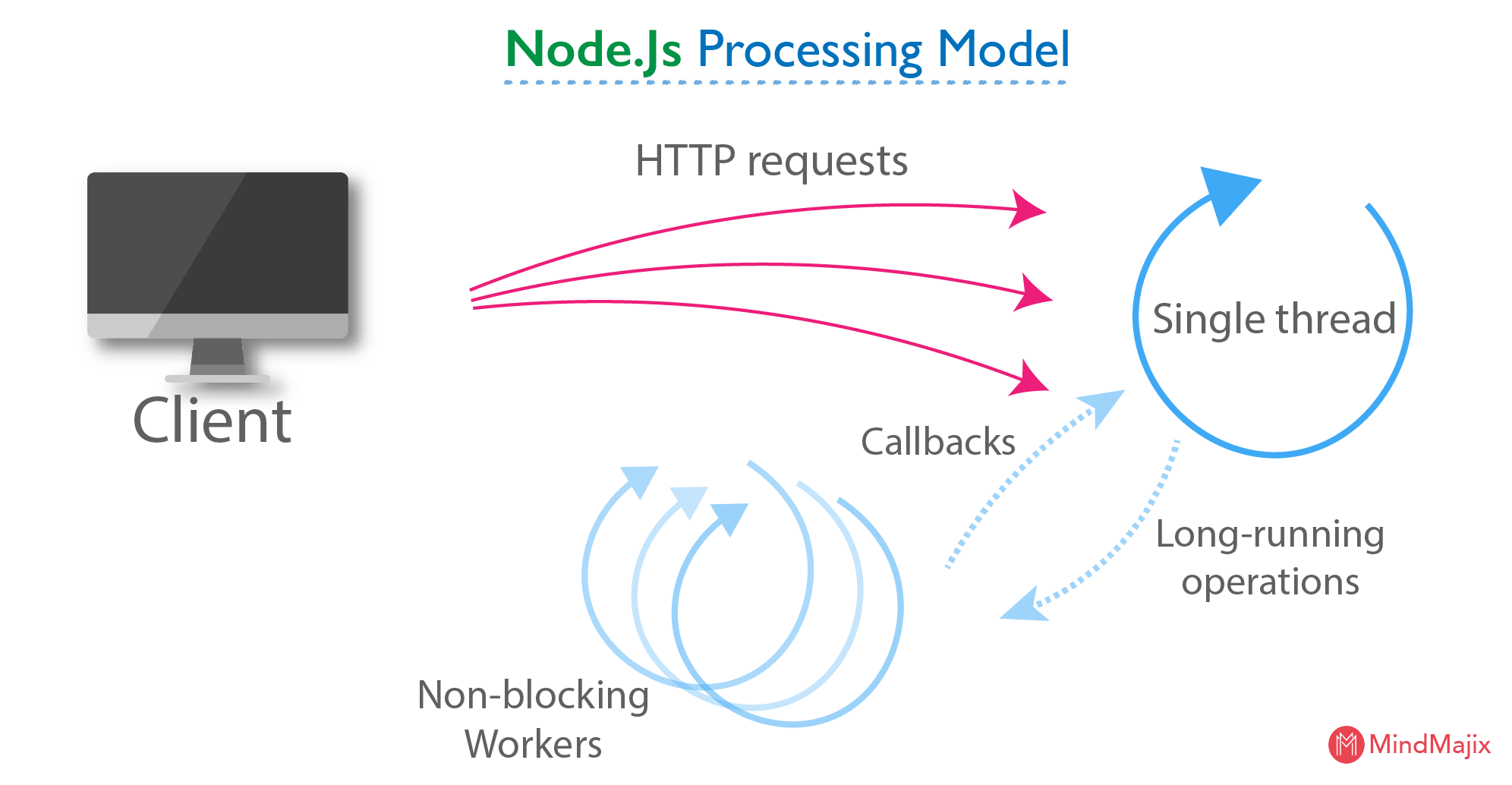 After the installation of Node.js is completed, we will try to display “Welcome” in a web browser.

First create a Node.js file as Myfirst.js and include the following code in a file:

Now save the file on your machine: C:Users/Your/Name/myfirst.js

This code commands the computer to display “Welcome”, if anyone uses your computer on port 8080.

By navigating the folder to the path where the file “myfirst.js" is situated, the CLI should looks something like this:

[Checkout What is PyCharm]

What is a module in Node.js?

To learn node.js you need to be proficient in understanding the concepts of JavaScript as few topics will include the development of web-based applications using node.js.

The average salary for a Javascript Developer in January 2018 was £62,500 and by the end of the year 2018, it rose by 9% (£6,888), according to CW Jobs. Here is the survey report of Node.js which states the development focus, overall presence, and the companies using Node.js.

[Checkout: What is Site Reliability Engineering]

JavaScript is flourishing in the current IT job market, though many aspiring software developers think that landing a job in this field may put them into trouble. This is because the other languages dominate particular areas of the market, like a python in the case of data analytics.

There were plenty of jobs available for Java in 2017, and this is not the case now. The number of jobs for Specialists in Python and JavaScript are either going up or steadily increasing. Node.js is listed often as the valuable framework to get skilled, even for those people who choose to focus on the client side.

Referring to job listing sites may give you a negative understanding of the demand for Node.js developers. Many companies demand other skills like python and javascript for those who are getting hired for java or sql. Today, Node.js ranks pretty high among the best paying development jobs in IT.