Want to scale up your career path with Cloud-native development? OpenShift is the right course of action you can delve into. Gain integrated vision associating the perks of OpenShift Automation. Support your professional journey with the right choices!

Choose wisely to stand out! We are here to guide you with riveting insights that will help you have an edge in Automation.

1. OpenShift is a Kubernetes cloud platform that aids developers in the development of apps. It enables businesses to design, deploy, and scale applications on-premises and in the cloud more quickly.

We have classified OpenShift Interview Questions - 2022 (Updated) into two stages they are:

2. What are the different visualizations?

4. What are the main components of OpenShift?

8. What Is Downward Api In Openshift?

9. What are Annotations in Open‐Shift?

10. What are the benefits of Openshift? 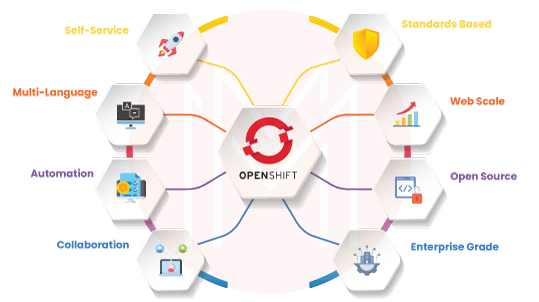 It is a platform-based tool where you can create your project, run it, and test it. After that, you can upload your project to any hosting environment. Furthermore, OpenShift is compatible with different programming languages, which helps the developer run the application written in other languages.

In its abstraction layer, different concepts of virtualisation are implemented. This concept supports the creation of the underlying in OpenShift.

2. What do you know about virtualisation?

It can be defined as the platform of a virtual system, storage or operating system. The main goal of virtualisation is to make the IT infrastructure more scalable and reliable.

The main feature of virtualisation technology is to abstract applications or operating systems from the physical platform. A hypervisor is software that is used to complete this abstract from the underlying physical layer. You will get better performance once you are using virtual layers. In this virtualisation, we need a minimum hardware setup.

3. What are the different virualizations?

We can use the given below different virtualisations:

4. Tell me the platform name supported by OpenShift?

5. How many enterprise editions are available in Openshift?

These three types of enterprise editions are available:

6. What is the latest version of OpenShift?

OpenShift version 2 is the latest version which is mainly based on the concept of year and cartridges. 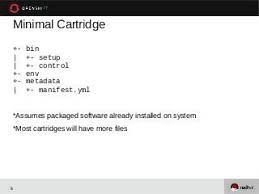 This is the focal point of starting a new application; here, we can configure the environment required to run all applications. 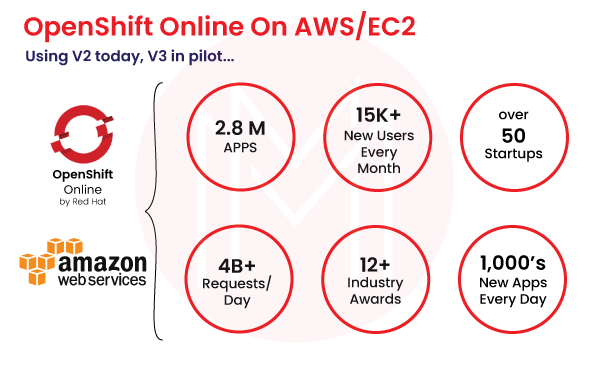 Online OpenShift is a network the usage of which one developer can quickly build, deploy, and scale containerised packages on the general public cloud. It became advanced with the aid of using Red Hats. It enables computerized provisioning, management, and scaling of the application.

9. What is the concept of the OpenShift container?

This container can create a platform for the development team, testing team, and hosting team to deploy the application in the cloud. These containers use Docker technology to upload to the server. 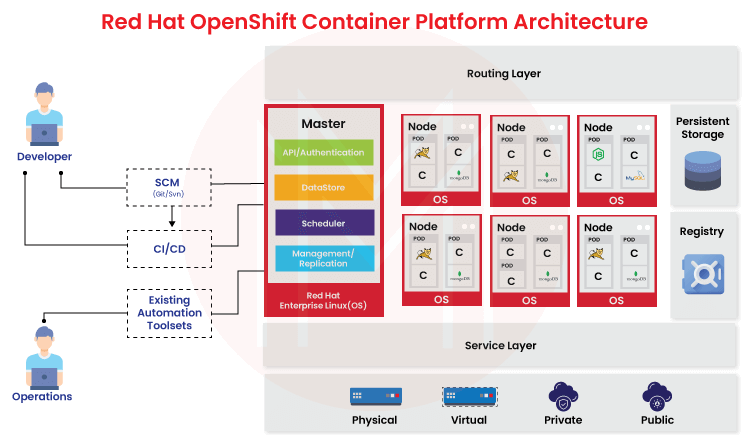 10. What are the main components of OpenShift?

11. What will be the syntax for inserting multiple images in a single container?

12. What is the function of build-in OpenShift?

By using the build-in openshift, we can process transforming images into containers.

Following are the different kinds of protocols supported by routes −

In OpenShift, while configuring master and client structure, the master comes up with an inbuilt feature of the OAuth server. OAuth server is used for generating tokens, which is used for authentication to the API. Since OAuth comes as a default setup for master, we have the Allow All identity provider used by default. Different identity providers are present which can be configured at /etc/openshift/master/master-config.yaml.

There are different types of identity providers present in OAuth. 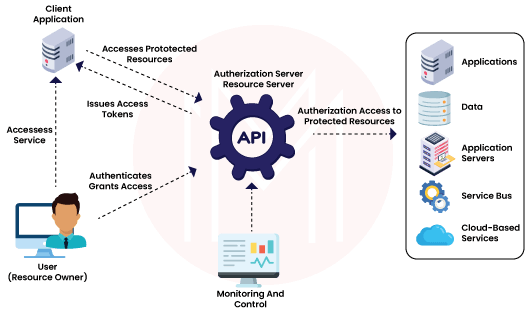 15. What do you think about Docker Strategy?

In this flow, OpenShift uses Dockerfile to build the image and then upload the created images to the Docker registry.

The Docker file option can be used in multiple locations starting from a file path, no-cache, and force pull.

This is one of the different kinds of build strategy; wherein there is no such compulsion that the output of the build is going to be an image. It can be compared to a freestyle job of Jenkins. With this, we can create Jar, rpm, and other packages.

It consists of multiple build strategies.

With the OpenShift command-line interface (CLI), the OC command, you can create applications and manage OpenShift Container Platform projects from a terminal. 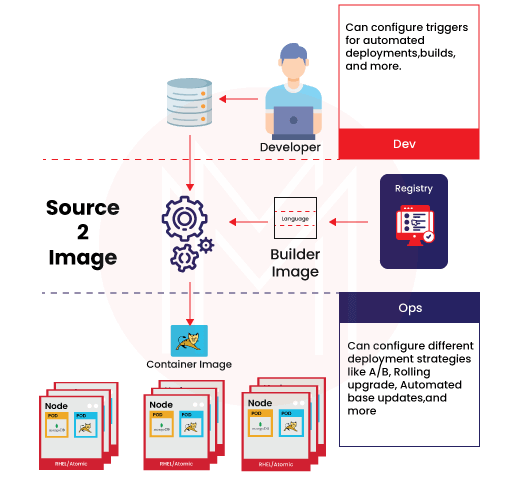 Candidates can discover this query as a follow-as much as the preceding point out on this listing of OpenShift interview questions. Rolling deployments contain the sluggish substitute of times of the antique model of software with the aid of using times of a new edition of the software. Rolling deployment relies upon the readiness to take a look at brand new pods earlier than cutting down capacities of antique components. In the case of vast issues, rolling deployment might be stalled.

20. Can you tell me something about the Downward API in OpenShift?

Candidates may want to discover this access among often requested OpenShift interview questions. Downward API is a mechanism for pods to retrieve metadata without the want to name it into Kubernetes API. Downward API is good for retrieving metadata and configuration of working pods.

1. What is supposed with the aid of using pods in Openshift?

Pods are what might be in comparison to a device occurrence (physical or virtual) to a compartment. OpenShift makes use of the Kubernetes concept of a pod, that's, as a minimum, one box conveyed collectively. The littlest determining unit may be characterized, sent, and oversaw.

The two of them are the original inception from open-source projects, and they similarly give Cloud Computing essentials. The significant distinction between them is that OpenStack provides a framework for administration or the structure 'IaaS.' It additionally provides object storage and blocks storage to the bootable virtual machine. Then again, Openshift performs unexpectedly.

3. Give detailed information about OpenShift Architecture? 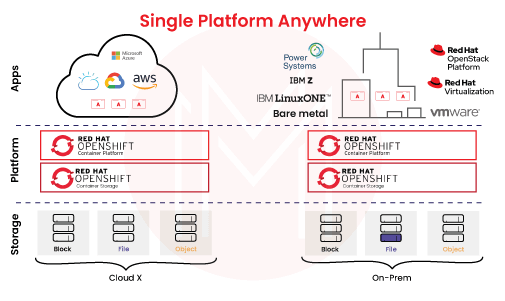 4. Explain how Docker and Kubernetes work with Openshift?

Openshift uses the efficiencies of Docker and Kubernetes with a control framework. As a result, many of the organization's pipelines are empowered through it, which are later utilized for auto-scaling, testing, and many more occasions.

Volume security implies making sure about the PV and PVC of projects in the OpenShift bunch. There are predominantly four segments to control admittance to volumes in OpenShift.

6. What is meant by application scaling in Openshift?

In the OpenShift application, auto-scaling is otherwise called pod auto-scaling. There are two sorts of utilization scaling as follows.

7. Explain about Haproxy on Openshift? 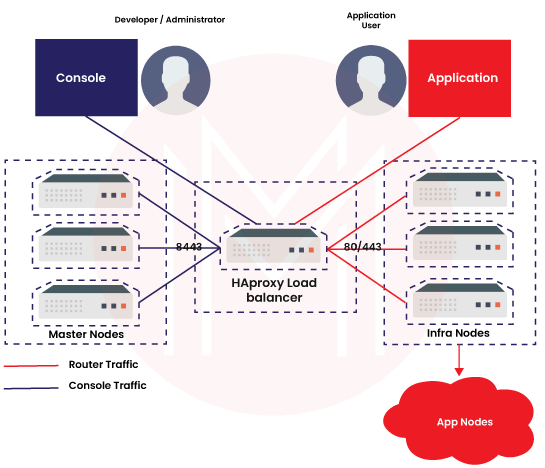 On OpenShift, if your application is versatile, HAProxy sits before it and acknowledges every approaching association. It parses the HTTP convention and chooses which application case the association should be steered to. This is significant as it permits the client to have sticky sessions.

Green deployment is a software launch version that regularly transfers user site visitors from a previous model of an app or microservice to the almost same new launch—each of which can be used for walks in production platform initiatives from a terminal.

9. What do you know about Canary Deployments?

In OpenShift all kinds of rolling deployments are canary deployments actually. The latest mode of the canary will be executed once you will find antique instances that are already edited. If the readiness takes a look at by no means succeeds, the canary instance is eliminated.

10. What is the deployment of Pod Resources? 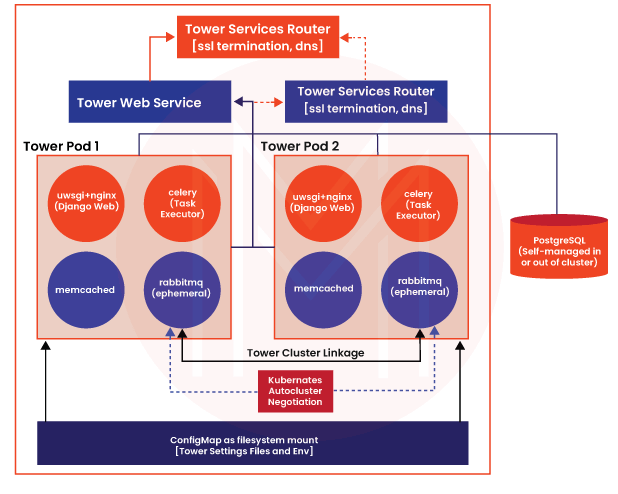 A deployment is finished with the aid of a pod that consumes sources (memory and CPU) on a node. By default, pods eat unbounded node sources. However, if a challenge specifies default container limits, then pods consume sources as much as the one's limits. Another way to restrict useful resource use is to (optionally) specify useful resource limits as part of the deployment method.

11. What Is Downward Api In Openshift?

The Downward API is a mechanism whereby pods can retrieve their metadata while not having to name into the Kubernetes API.

12. What Is Gear In Openshift? 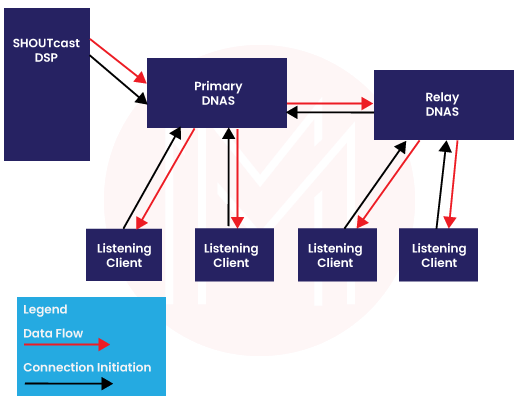 It can be defined as a server with certain specifications like memory, and CPU. Therefore, it is an essential unit for walking and utility.

This approach includes the advent of supply code pictures via downloading and compilation of the equal container. The pictures are made from the equal code, and with a custom approach, rpm and jar get developed.

14. Which tasks can declare a Persistent Volume (PV) object?

Candidates can also locate a few difficult questions like this in OpenShift interviews. The solution shows warning signs closer to default tasks, OpenShift tasks, any project, and OpenShift-infra tasks.

15. What are Annotations in Open‐Shift?

Annotations are similar to labels but primarily concerned with attaching non identifying information, which is primarily used by other clients such as tools or libraries. Therefore, annotations don't have the concept of selectors.

16. What is SSH authentication? 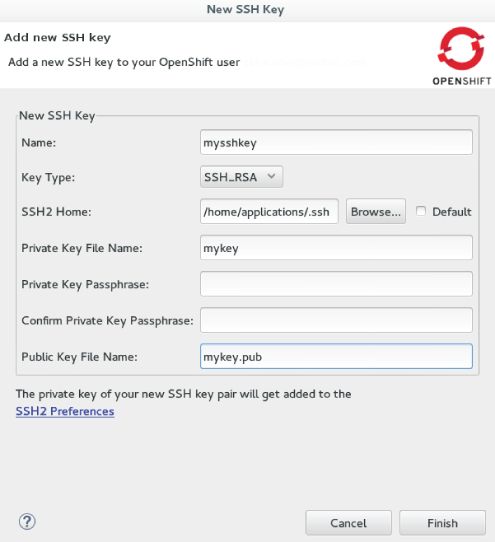 OpenShift uses the Secure Shell (SSH) network protocol to authenticate your account credentials to the OpenShift servers for secure communication. Successful authentication is necessary to manage your cloud environment, and OpenShift supports both RSA and DSA keys for SSH authentication.

17. What security controls does OpenShift provide for containers?

Containers run as non-root unique users that are separate from other system users. They cannot access host resources, run privileged, or become root. They are given CPU and memory limits defined by the system administrator. Any persistent storage they access will be under a unique SELinux label, which prevents others from seeing their content.

18. What are the features of OpenShift v3?

OpenShift v3 is a layered system designed to expose underlying Docker-formatted container images and Kubernetes concepts as accurately as possible, focusing on the easy composition of applications by a developer. For example, install Ruby, push code, and add MySQL.

19. What are the benefits of Openshift?

Following are the benefits of Openshift:

20. Write down the difference between Openstack and Openshift?

Both of them are the authentic inception from open-supply projects, and they, in addition, deliver Cloud Computing essentials. The giant difference among them is that OpenStack gives a framework for management or the structure 'IaaS.' It moreover gives item garage and blocks garage to the bootable digital machine. Then again, Openshift plays unexpectedly.

1. Is there any membership available to use OpenShift?

Free membership is available for three years with 1GB of space.

2. How much time will it take to learn OpenShift?

A minimum 10 hrs course will teach you OpenShift.

3. How can I become Openshif certified?

4. Can we start OpenShift as a beginner?

Yes, you can start with OpenShift as a beginner as it is an open-source platform, allowing developers to practice more without any user license.

5. Is OpenShift a free tool?

It is a free tool that provides an integrated set of tools.

6. Is OpenShift a cloud?

It will give a cloud-like experience. We can deploy it anywhere.

7. What is the average salary in OpenShift?

8. What is the programming language required for OpenShift coding?

You can use programming languages like Python, Java, Go, AngularJS, and Ruby for OpenShift coding.

9. Can we use Openshift in windows?

We can run OpenShift in windows with a particular container platform cluster.

10. Is OpenShift similar to Docker?

Many firms' overall digital transformation strategies for cloud-native environments now include Automation. OpenShift is a fantastic platform for developing and deploying cloud-native apps. As a result, it's important to take the right approach for well-desired results. We are confident that our efforts will help you ace the OpenShift interview and help you bag your dream job.