Endeca company has been around since 1999 and was based in Cambridge, MA. For most of its time, Endeca has focused on the e-Commerce market, providing the technology behind eCommerce websites, what all these sites have in common is a feature called “faceted search”, where users are able to query and drill-into the retailer’s dataset, using any combination of attributes.

Endeca focused on this e-commerce market first, and developed the MDEX engine to support this, marketing it as a column-store, rapid-development query engine that allows “faceted searches” across lots of different, “jagged” data sets (i.e. data sets that don’t have the same data model but with some commonality between them). About a couple of years ago, Endeca took the core technology from this product and created a standalone BI tool called Endeca Latitude, complete with dashboard components, an ETL tool, dashboard and report designers, and a story that revolved around “agile BI”, based on the fact that the MDEX engine doesn’t require a strictly-defined data model. By the time of the Oracle acquisition, Endeca’s product line looked like this, with Endeca Infront, the product behind these websites, accounting for the majority of revenue.

Oracle Endeca Commerce is comprised of three major components.
These components are: 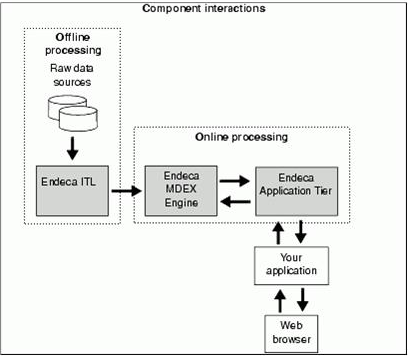 The one parent rule

In addition to parents, dimension values can have ancestors.