In this tutorial, we will discuss the following topics:

Scala is an object-oriented programming language that is fast, efficient and compact. We compile the Scala Programs by using the scala compiler.  In Scala, everything is function and object. Scala is useful for handling the huge-amount of Big data.

Following are the important features of Scala:

In Scala, we will not have any static methods or variables. Scala utilizes Singleton Object, which is basically a class with just one object in the source code. By using the “object” keyword, we can declare the Singleton Object.

Scala assesses the expression when they are necessary. By using the "Lazy" keyword, we can declare the lazy variables. The lazy computation enhances the performance.

In Scala, every variable we declare is immutable. Immutable means we cannot change the value. Immutable variables assist in handling the concurrency control that needs managed data.

Scala gives the regular library that contains the actor model. By using the actor, we can develop the concurrency code. To deal with the concurrency, Scala has a separate platform called "Akka".

From Scala 2.10.0, Scala provides a new method for creating the strings from our data, and that method is known as String Interpolation. The string interpolation enables the users to include variable references in the processed string literals.

If you have good knowledge of Java, then it is easy for you to learn the Scala programming language. We consider a scala program as a collection of objects that interact by calling each other's methods. Following are the components of a scala program:

Class: A class is a blueprint or a template that explains the states or behaviours that are associated with that class.

Object: Objects contain behaviours and states. Object is an instance of the class.

Method: Generally, the method is behaviour. A class can have many methods. In methods, we can develop logics and manipulate the data.

Closure: Closure is a function, and its return value depends on the values of the variables that we declare outside this function.

Field: Every object will have a distinct group of instance variables, and those variables are known as fields.

Traits: A trait binds the field and method definitions, and we can reuse them by blending them into the classes.

How to write a Scala Program

For writing a scala program in our machine, we need to perform the following steps:

If we don't have Java in our system, we can download and install it.

After installing Java, we have to set its environment.

For setting the java environment, we have to configure the "JAVA_HOME" environment variable for targeting the location of the directory where we installed the Java.

Step3: Downloading and Installing the Scala

After installing and configuring Java, we have to download the Scala. After downloading the Scala, we can install it by executing the below command in the command console:

After installing the Scala, we can see the scala version by executing the following command in the command console:

After downloading and installing the Scala, we can write and execute the Scala Programs.

We save the above program with "Scala1.scala" name.

After saving the program, we will compile the code in the following way:

After compiling, we execute the program:

When we execute the program, we get the following output:

In any Programming language, variables act as memory locations for storing the values. When we create a variable, we have to hold some space in memory.

According to the variable data type, the compiler assigns the memory and determines what we can store in the memory. In Scala, we have a syntax to declare the variables. We can specify the variables as a variable or a constant.

In Scale, variables have three types of scopes, according to the place where we use them. The variables can be method parameters, local variables and fields.

We use Method Parameters for sending the values inside a method when we invoke a method. We can access the method parameters only from inside the method.

Object is a real-time entity. It includes behaviour and state. Objects have the following features:

Behaviour: The functionality that an object carries out is called its behaviour.

State: States are the data values of Objects.

Class is a blueprint or template, and it is called as a group of Objects of the same type.

A Class contains the following things:

Syntax of Inheritance is as follows: 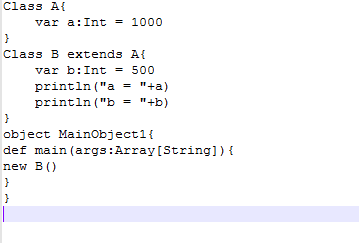 Scala has auxiliary and primary constructors. 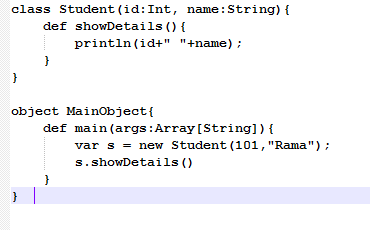 Method Overloading enables us to declare methods with similar names but has different data types or parameters. It assists us in optimizing the code. 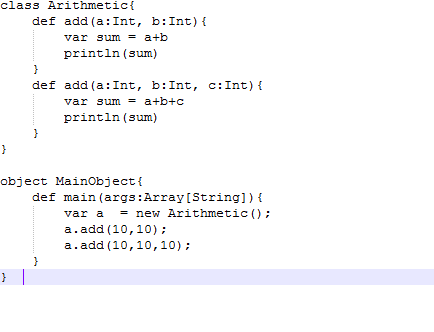 For overriding the methods from the parent class, we should use override annotation or “override” keyword.

Multithreading is a mechanism that runs multiple threads concurrently. It enables us to execute multiple tasks independently. We can accomplish multitasking through multithreading. Thread is a light-weight subprocess that holds less space(memory).

In Scala, we use multithreading for developing concurrent applications. The Scala Multithreading is similar to Java multithreading except for Scala language syntax. We create threads by extending the Thread class or by implementing the Runnable Interface.

In the following screenshot, we can see a sample program of Thread Concept:

It is the period in which the thread begins and ends. The thread life cycle has different phases or states like New, Runnable, Block, Terminate, etc. Thread class contains different methods to control the thread states.

We use the “Final” keyword for preventing the inheritance of base class members into the derived class. We can define final methods, classes and variables also. 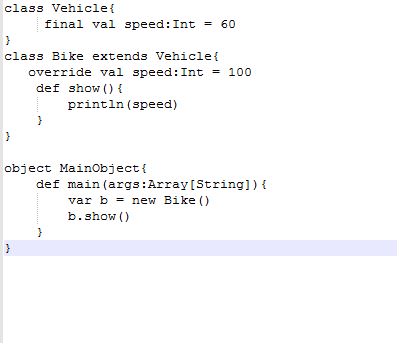 Operators are symbols that tell the compiler to carry out particular logical or arithmetic operations. Scala Provides the following operators:

Following are the conditional statements of Scala Programming Language

“If” statement contains a boolean expression and one or more statements.

Syntax of “If” is as follows:

As the boolean expression or condition is true, we will get the following Output:

An “If” statement is followed by an elective “else” statement, that gets implemented when boolean expression is not true.

Syntax of “If-else” statement is as follows:

As the condition present in the If Block is false, the code present in the Else block gets executed. So, when we execute the above code, we will get the following Output:

The “If” statement is followed by an elective “else if...else” statement, that is useful to test different conditions through one if...else if statement.

Syntax of “if-else-if-else’ statement is as follows

Syntax of Nested “if-else” statement is as follows:

When we execute the above code, we will get the following Output:

Syntax of While Loop is as follows:

When we execute the above code, we will get the following output:

The do-while loop works the same as the while loop, except it checks the condition or boolean expression at the end of the loop.

Syntax of the do-while loop is as follows:

For loop implements a group of statements repeatedly and compresses the code that handles the loop variable.

Syntax of For loop is as follows.

When we execute the above code, we will get the following Output:

Scala programming language has functional programming methods. It offers many built-in functions and enables us to generate user-defined functions.

The above program gives the following Output:

Scala programming language also supports recursion functions. To terminate the program, we must have a base condition.

In the below screenshot, we can see the Recursion Function Example. 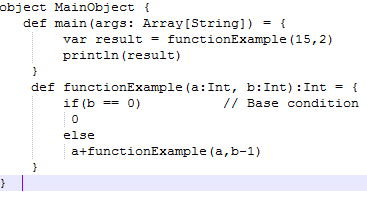 String is an amalgamation or sequence of characters. In strings, we use a sequential approach for storing the elements in the memory. In Scala, string data structure is immutable.

We use the compareTo() method for comparing the provided string with the existing string lexicographically.

We can concatenate two strings by using the “+” operator.

We use a substring method for getting a substring from the given string. By mentioning the starting index and ending index as arguments, we can retrieve the substring based on our requirement.

Array is a group of changeable values. From Arrays, we can retrieve the elements based on the index of the element. Index starts from 0 and ends at n-1, where “n” is the size of the array.

Scala supports two kinds of Arrays; they are:

Single Dimensional Array stores the elements in sequential order. We store the array elements in the contiguous memory area.

Syntax of Single Dimensional Array is as follows:

We use multi-dimensional arrays for doing matrix operations and developing tables.

For handling the exceptions, Scala provides Try-Catch Block. Try block encloses the suspicious code. A catch block handles the exception that occurs in the Try block. In one program, we can have any number of try-catch blocks.

When we execute the above code, we get the following output:

Execute the rest of the program.

Scala uses throws keyword for declaring the exceptions. By using the method definition, we can declare the exception. “Throws” keyword gives information to the caller function that this method can throw the exception.

Scala has a broad range of collection libraries. It has classes and traits for collecting the data. Collections can be immutable or mutable, and we can use them based on our requirement.

We use List collection for storing the ordered elements. It acts as a class to immutable linked lists. It is suitable for the LIFO(Last-In-First-out) approach. It stores elements to order and replicate the elements

Maps store the elements in pairs of values and keys. We can create a map by using a comma or rocket parameter.

Unlike a list or an array, tuple stores the objects with different data types.

Options have a container to zero or one element of the given data type.

Scala contains some inbuilt methods to handle the files. We can generate, open and close the file. It uses the “java.io” package for reading and writing the files. For creating the files, we use java “FileWriter” or “PrintWriter” methods.

The above scala code will create a file with “Scala1.txt” name.

Trait binds the method and field definitions, that can be reused by combining them with classes. One class can blend unlimited traits. We use traits for defining the objects by mentioning the signature of the supported methods. The definition of traits is similar to the class definition.

For defining the traits, we use the “trait” keyword. As child classes can implement the un-implemented methods of traits, we can say that traits are similar to the abstract classes of the java.

Tuple is a collection of ordered elements. If a tuple does not have any element, then it is known as an empty tuple. In tuples, we can store any kind of data. Through Tuples, we can return multiple values from the functions.

Scala is an object-oriented programming language, and it has all the features of java programming. It is hugely used in Big data for handling large amounts of data. If you know java programming, then you can learn scala programming easily. I hope this Scala Tutorial article provides you with the required information about Scala Programming.

If you have any queries, let us know by commenting in the below section.