Kafka is a stream processing software developed by LinkedIn previously and now functioning under the Apache foundation. Kafka is written in Scala, it is a publish-subscribe based messaging system.

In this Kafka tutorial, you will gain knowledge on concepts like Kafka Introduction, messaging system, terminologies, workflow, cluster setup, use-cases and real-time applications.

What is Apache Kafka

Apache Kafka is a messaging system that allows interaction between producers and consumers through message-based topics. Kafka is becoming popular because of the features like easy access, immediate recovery from node failures, fault-tolerant, etc. These features make Apache Kafka suitable for communication, integrating the components of big data systems. It is integrated with Apache spark and storm for analyzing the streamed data. This tutorial teaches you the Kafa basics, Advantages, Disadvantages, workflow, Installation and basic operations. In the end, we will conclude with real-time applications of Kafka.

The main job of the messaging system is to transfer the data from one application to another. As a result, applications can concentrate on data, not on how to share it. Messages are distributed using a message queuing system. The consumer consumes messages present in the queue by following specific messaging patterns, they are:

In this pattern. Messages remain in the queue. Anyone can consume the messages present in the queue, but only one consumer can consume a specific message. When the consumption is over, that particular message goes away from the queue.

This pattern is popularly known as pub-sub, and it is the most widely used messaging pattern. In this pattern, Messages remain in a topic. In this system, publishers are those who produce the messages and subscribers are those who consume the messages. To explore this system, we can take Dishtv as an example. Dishtv publishes various channels, and anybody may subscribe to their group of channels and have them at any time. 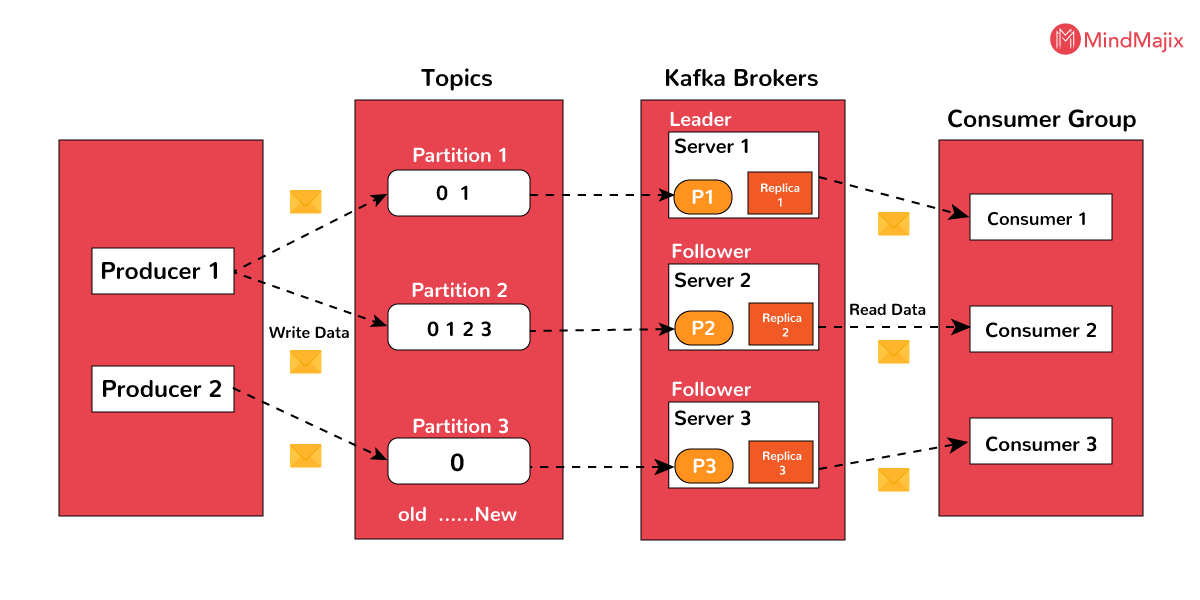 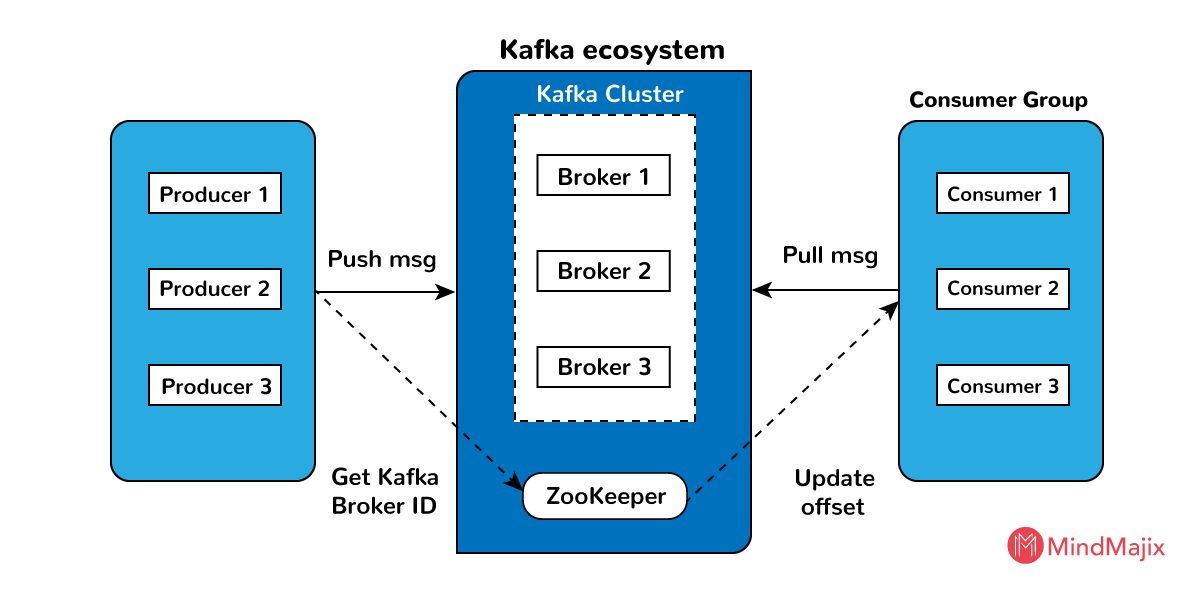 Broker: Usually Kafka cluster contains several brokers to preserve load balance. As Kafka clusters do not have states, they take zookeeper’s help to sustain cluster state. In a second, the number of reads and writes are handled by the single Kafka broker instance. Zookeeper does Kafka broker leader election.

Producer: The producer's main job is to move data to the brokers. If producers find the existence of a new broker, automatically they will forward the data to that broker. Producers do not wait for the recognition of the broker, they will send messages as soon as a broker can manage.

Consumer: As brokers are stateless, consumers have to record how many messages are spent by utilizing Partition offset. If the consumer recognizes a specific message offset, it indicates that all the previous messages are consumed by that consumer. For consuming the next message, the consumer sends an asynchronous request to the broker to make a set of bytes ready. The consumer can rewind or skip anywhere in the partition by using message offset.

Kafka allows both pub-sub and queue-based messaging systems. In both systems, the producer's only job is to send the messages and the consumer's job is to choose any messaging system depending upon the requirement. Let us see the steps required for a consumer to select a messaging system.

In a queue messaging system rather than a single consumer, a group of consumers who are having the same ‘group ID’ will subscribe to a topic. Consumers who are subscribed to a topic with same “group ID” are considered as one group, and the messages of that topic are shared among them. The real workflow of this system is as follows:

Before installing Apache Kafka, we should check whether Java is installed in our system. To check the java installation, we should follow the below step :

If java is installed in your system, the java installed version is displayed. If java is not installed, you have to follow the below steps for installing java

JDK can be downloaded by clicking on the URL

By clicking the above URL, you can download JDK based on your system configuration.

Step 1.b: Extracting the JDK files.

After downloading JDK in your system, open the downloads folder and check whether JDK is stored or not. After checking, extract the files from the JDK archive file(tar or rar) by using the below commands:

Step 1.c: Move to my directory.

Java files are made accessible to every user by extracting java files from my directory.

For setting environment variables and paths, you should follow the below commands.

We can extract files from tar files by following the below commands.

After this configuration file is saved, a zookeeper can be started.

When you execute the above command, the System displays the following response:

For connecting to the zookeeper server, you should execute the following command.

After executing the command, your Zookeeper server is started.

After completing your work, the zookeeper server  is stopped by executing the below command:

To install apache Kafka into our system, the following steps are executed

For installing the Apache Kafka into your system, you have to download it from the following URL

By executing the below commands, tar file is extracted.

You have successfully downloaded the Apache Kafka into your system.

The Apache Kafka server is started by executing the below command.

When we execute the above command, your Apache Kafka will be started. You will see the parameters of the server like timeout, protocol version, roll hours, etc.

The Apache Kafka server can be stopped by executing the following command.

Apache Kafka is also used by Mozilla, Oracle and many other enterprises.