From automating repetitive tasks to carrying out advanced functions in Microsoft that aren't available, PowerShell has nearly limitless potential. Having a strong knowledge of how PowerShell works open diverse opportunities for how it can be employed. In this PowerShell tutorial, we will unfold what PowerShell is, PowerShell commands, and many other important concepts that you need to know in order to use it.

PowerShell is Microsoft's task automation and configuration management framework. It consists of a command-line shell and is associated with a scripting language. PowerShell is based on the .NET framework. It is now an open-source project and is installed on macOS, Windows, and Linux platforms.

Initially, using the code name "Monad," PowerShell was publicly shown at the Professional Developers Conference in September 2003. PowerShell’s first version, 1.0, was released in 2006. All major releases are still supported, as the year and version went by. PowerShell's hosting environments and capabilities are growing significantly.

Initially, using the code name "Monad," PowerShell was publicly shown at the Professional Developers Conference in September 2003. PowerShell’s first version, 1.0, was released in 2006. All major releases are still supported, as the year and version went by. PowerShell's hosting environments and capabilities are growing significantly.

Below is a list of PowerShell versions, their date of release, their features, and the operating systems they support.

How to launch PowerShell?

Windows PowerShell is pre-installed in all the latest versions of Windows.

1. Search for PowerShell in Windows and select and click.

2. The following screen will open and it means PowerShell is ready to work on.

The key features of Windows PowerShell are:

What is the PowerShell ISE?

Windows PowerShell ISE (Integrated Scripting Environment) is a graphical user interface that enables you to run commands and create, test, and debug scripts. It supports syntax coloring, multiline editing,  context-sensitive help, tab completion, and many more. The tool also supports the development of scripts, which are collections of commands where you can add complex logic for their execution.

A cmdlet is also known as Command let, which is a lightweight Windows PowerShell script that executes a single function. PowerShell includes cmdlets in the command prompt and you can create cmdlets Command using PowerShell APIs. Some of the key points of cmdlet are:

A cmdlet is denoted as a verb-noun pair and has a .ps1 extension. Every cmdlet has a help file and can be obtained by typing Get-Help <cmdlet-Name> -Detailed.

Some of the popular cmdlets are:

Cmdlets are a bit different from commands in other command-shell environments in the following ways:

Example: To find out all the commands you can use with the Get verb, type:

CMD is also known as Windows Command Prompt. It is the original shell for the MS-DOS operating system and is a very old tool that does not support remote system administration.

While PowerShell presents many cmdlets for system administration tasks, it supports automation of a wide range of functions such as user and permission management, active directory administration, extracts data about security configuration, and more.

Let’s look at the major differences between PowerShell and Command Prompt:

PowerShell scripts are stored in a .ps1 file. By default, you can't run a PowerShell script by merely double-clicking a file. Instead, execute a script like this: Right-click it and click "Run with PowerShell." 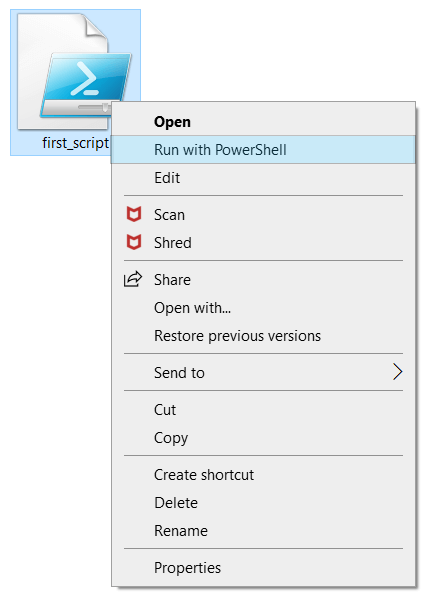 Also, there is a policy that limits script execution. You can check this policy by running the Get-ExecutionPolicy command.

You will see one of the following outputs:

PowerShell loops merely repeat the same set of commands a set number of times. Mostly, there are a number of loops available in PowerShell, and more than one loop technique can be used effectively in many cases.

The major loops of PowerShell programming language are listed below:

PowerShell variables store information about all types of values stored in PowerShell. These are represented by text strings that start with a dollar sign, such as $b, $process, etc.

There are different types of variables available in PowerShell:

Below mentioned are a few of the major variables along with their description:

PowerShell provides various types of operators to manipulate variables. The following are the list of the PowerShell operators:

Arithmetic operators (+, -, *, /, %) are used to calculate values in a command or expression. By using this operator, you can add, multiply, subtract, or divide values, and calculate the remainder of a division operation.

Logical operators ( -or, -xor, -and, -not, !) are used to connect conditional statements into a single complex conditional.

These operators (>>, >, 2>>, 2>, and 2>&1) are used to send the output of a command or expression to a text file. It works like the Out-File cmdlet (without parameters), but also will let you redirect error output to specific folders.

These operators are used to divide and combine substrings. The -join operator concatenates multiple strings into a single string. The -split operator splits a string into substrings.

Type operators ( -is not, -is, -as) are used to find or change the .NET Framework type of an object.

Unary operators are used to increment or decrement variables or object properties and set integers as positive or negative numbers.

In this blog, we have covered all the primary concepts of PowerShell and how it has become the most important programming language We hope this tutorial is informative and adds value to your knowledge.

Are you looking to get trained on PowerShell, we have the right course designed according to your needs. Our expert trainers help you gain the essential knowledge required for the latest industry needs. Join our PowerShell Certification Training program in your nearest cities.

These courses are equipped with Live Instructor-Led Training, Industry Use cases, and hands-on live projects. This training program will make you an expert in PowerShell and help you to build your career as a PowerShell Developer. Additionally, you get access to Free Mock Interviews, Job and Certification Assistance by Certified PowerShell Trainers.