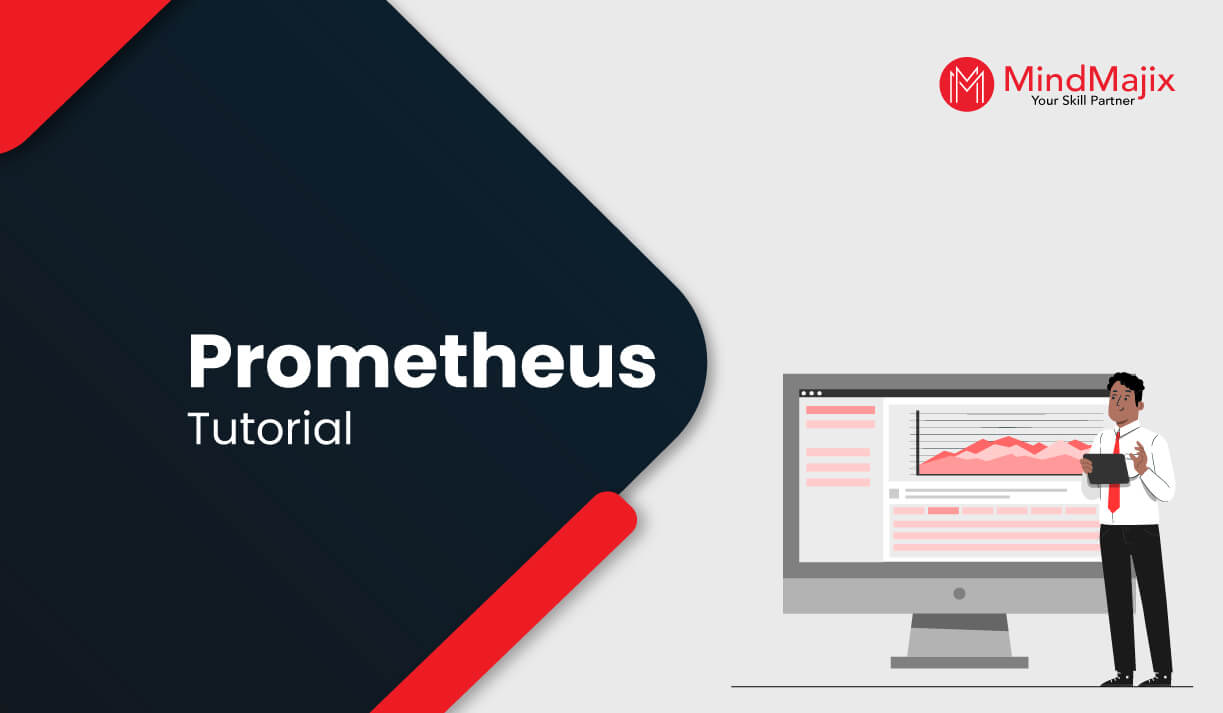 Prometheus Tutorial, Prometheus came into being to monitor the dynamic container environment. It is an open-source monitoring system that depends essentially on the metrics system.

It is widely operational to monitor dynamic container environments like Kubernetes, docker swarm, among others. What makes Prometheus different from its competition is its implementation.

For instance, Prometheus can oversee and monitor any conventional non-container infrastructure. In case an organization possesses bare servers alongside applications, they can still deploy Prometheus without a hassle.

Over the years, Prometheus has become a mainstream monitoring tool for the microservice and container world. In this Prometheus tutorial, you will learn the below things.

[Related Article: What is Kubernetes?]

Why does Prometheus play an essential role in this infrastructure?

The modern-day DevOps are turning very complex with time. Moreover, the DevOps have also become complicated for manually handling and overseeing operations. Hence, the need for automation is substantial today to compete. Prometheus comprises multiple servers which run in the form of containerized applications. Additionally, Prometheus also has hundreds of unique processes that run across an infrastructure. As things are completely interconnected, it's increasingly important to maintain a setup that offers smooth running operations without relying on application downtimes.

For instance, consider that you possess a very complex and intertwined infrastructure that comprises several servers spread across several locations. The infrastructure lacks comprehensive insight regarding what's occurring in terms of hardware or even applications such as errors, response latency, hardware down, overloaded by running other resources. There is always a possibility that in complex infrastructures, things can generally go very wrong.

Many businesses have an insurmountable amount of services and applications. It also increases the chance of crashing and failing other services that run alongside. Suddenly, the application becomes unavailable to users. It becomes quite exhausting to identify wrong things. The task of finding the problem and manually debugging the system can consume a lot of time.

What if one of your servers ran out of memory and a container that syncs data between two or more databases stopped running? How would you respond to such complications? In this case, the two database pots inevitably fail to function as the database becomes defunct, the authentication service at the heart of operations. The application that authenticates users on an everyday basis also did fail to run. These things happen in the background, which is ultimately the opposite of the users' perspective. Users will see an error suggesting there is a problem with the UI. The chain of events taking place inside the cluster is unknown to users. All they see on their screen is the error.

The moment they see an error, work their way backward, identify the cause and then fix it. It is easier said and done when it comes to identifying and fixing things. Users will check if the application is operational again or if the authentication service is satisfactory, or why it crashed. Finally, after careful observation, they will reach the point of origin, the container failure. If you don't follow these procedures, you might not have insight into fixing the problem. Well, this is where Prometheus comes in like a knight in shining armor.

Prometheus, a constant monitoring tool, oversees if the services are running correctly. It also alerts the maintainers the moment a single turn in the cluster crashes. Prometheus is an insightful tool that allows people to know what occurred in the cluster. Sometimes, the problems are identified right before they occur. Maintainers won't have to spend an ample amount of time to recognize, evaluate, fix the underlying errors in a container cluster.

In this case, Prometheus will keep checking the memory usage, notify the maintainer and administrator. The real-time tool measures till 50 or 60 percent of memory usage are reached.

What is monitoring in Prometheus?

1. Time Series Database - It stores the data in the form of metrics like CPU usage, an exception in applications.

3. PromQL Queries (Web Server) - The web server or server API accepts the queries for the stored data. Then this webserver component or API displays the data in a dashboard or even a User Interface. Moreover, the data can be visible via the Prometheus dashboard and visualization tool.

The Prometheus server is responsible for monitoring a specific thing. Further, this thing can be anything like a comprehensive Linux server or Windows Server. It can also be a singular Apache Server, single application, or service-like database. Whatever Prometheus monitors are called the target, and each targets units for monitoring.

In a Linux server, then the target would be CPU status, Disk Space or Memory Usage, exception count, among others. The unit which is dedicated to monitoring a target is called a metric. These metrics are automatically saved into Prometheus' database component.

[Related Article: What is API Testing?]

Prometheus has a human-readable text-based format for determining the metrics. Further, the metrics have two attributes, HELP and TYPE.

Metrics in Prometheus ignores the necessary context. Instead, it tracks aggressions during different types of events. For keeping the resource usage stable, the number of numbers that are monitored is bounded. Prometheus provides ten thousand/process as a reasonable upper bound. HELP Is the overall description of the metrics, whereas Types classified metric into three types:

1. Counter: It denotes the metrics of how many times something took place. Several exceptions that the application has and the received requests come into this category.

2. Gauge: As the name suggests, the gauge is the metric that goes up and down. For instance, the current CPU usage falls into this category. Even the current capacity of disk space is an integral part of metrics.

3. Histogram: This depicts the time something took or the massiveness of the request's size. The metric buckets in Histogram are cumulative. To understand how Histogram works in Prometheus, refer below:

Prometheus usually pulls data directly from HTTP endpoints. By the looks of it, the HTTP endpoints are the default address, aka metrics. To make it work:

1. target should expose the metric/target.

2. Available data must be in the correct format, especially the one that Prometheus understands.

There are already individual servers that expose the endpoint of Prometheus. Administrators and maintainers won't have to put in extra work for accumulating the metrics. However, there are several services that don't support metrics endpoints. Here, additional components are necessary to achieve this freedom. The exporter is the most sought-after component for exposing Prometheus' endpoints.

It is a service or a script that gathers the metrics from the target. Exporter converts the format into the medium that Prometheus can seamlessly understand. It also exposes the already restored data into its own metrics endpoints. Further, allowing Prometheus into scraping the data thoroughly. On the other hand, Prometheus possesses a dedicated list of exporters for unparalleled services.

The metrics in Prometheus support the entire concept of Labels. It provides an edge to the data dimensions. It offers incredible insights if the labels are used efficiently. Moreover, it empowers much more insights directly into the data while managing the metrics.

The moment the metrics data is spread throughout Prometheus, things are simplified. The world becomes an Oyster, and Prometheus provides a wholly dedicated User Interface, allowing for viewing, querying, and graph data.

Prometheus has its own querying language, PromQL. As a powerful language, PromQL leverages metrics' power like Histograms to provide quite unique functionalities. The optimum power of Prometheus comes from the dashboard tools like Grafana. It alerts systems like PagerDuty for delivering a holistic DevOps monitoring solution.

Prometheus is a powerful monitoring system that supports and works in dynamic environments. Kubernetes runs the core platform of Prometheus, allowing complete monitoring of infrastructure and application. Every time Prometheus scrapes off metrics, it immediately records the snapshot of data in the database.

Prometheus is also compatible with Docker. So, in case you don't wish to rely on Kubernetes, there's a powerful alternative. Monitoring and performance shouldn't be an afterthought for an organization. Prometheus is easy to implement, seamless to maintain, and a groundbreaking tool.