10 Reasons To Learn Ruby On Rails

In recent years, Ruby on Rails has gained immense popularity as a web development framework. Still not sure if Ruby on Rails is right for you? We'll tell you the top ten reasons to learn Ruby on Rails in this post.

It has been many years since the discovery of Ruby on rails and since then it has gained a lot of popularity. This is a web application that has a server-side oriented framework written in Ruby language. The language is written under the MIT license. A good example of a model view controller framework is Rails which helps in providing default structures for a web service, database and also web pages. There are certain web standards like JSON, XML (both of these for data transfer purpose) HTML, JavaScript and CSS (these for user interface and display purpose) which are encouraged by Ruby on rails.

Do you want to become a Ruby on rails Developer? then enrol in "Ruby On Rails Training" this course will help you to become a successful ROR Developer

The emergent of Ruby on rails was in the 2000s. Since then web app development has been greatly influenced by it. This is mainly because it has got certain features that are innovative like seamless creation of database tables, scaffolding of views and migration. These features have helped in rapid enabling of application development. There are many helpful reasons to learn Ruby on rails.

Following pointers will be covered in this article:

Reasons To Learn Ruby On Rails:

Now let us learn about the above-mentioned advantages in a boarder sense.

#1. The language is great to learn

Ruby language is considered to be one of the most versatile and impressive languages. This is due to the fact that it has got a combination of the best features of dynamic languages and strongly typed static languages. It then blends this combination with a paradigm that is object-oriented. This paradigm focuses on the concept of getting things done and not on writing a lot of codes. The language is quite productive to learn to make a good career.

#2. The Ruby language focuses on data models that are code-based.

To define the data models in Ruby on rails, you have to make use of codes. The first will be to make the data model. After this initial step, if any changes are required to be made on the data model it is done using scripts. The scripts manipulate the model. This is a rather unusual process and it means that there is of little importance to replicate a rails project on any other server.

#3. The concept of open-source with helpful community

Apart from being a good open-source, Ruby in rails is also associated with a progressing community which is helpful in nature as well. For the new developers, the open-source concept of Ruby on rails is a great concept and it will help them.

#4. Ruby on Rails is well documented

For learning any new thing it is always important to find a good source. For the learners, the source is the Internet. If you want to learn Ruby on rails there should not be any problem since this concept is well documented. There are quite a number of impressive tutorial videos on Ruby on rails that are available on the Internet. These videos can be watched for free or you may need to pay. The tutorials are of high quality and they are effective than most of the books.

#5. Learn Ruby on rails to get good jobs

In terms of job satisfaction and opportunities for employment, learning Ruby on rails can be very beneficial. The main is that Ruby on rails is a technology that has got features which are cost-saving and has low upfront which helps in increasing the importance of Ruby on rails developers.

What are the responsibilities of an RoR professional?

The responsibilities at entry-level - the main responsibilities of an entry-level RoR professional includes managing database, setting up rail environment, request handling, basic HTML, CSS and JavaScript knowledge. They also include in performing tasks that are related to the development of RoR application.

The responsibilities at mid-level - In this category, you should have knowledge in Active Record association, object orientation and design pattern.

The responsibilities at the senior level include vast and great knowledge of Ruby Metaprogramming, monitoring skills, estimation and database modelling. They should also have analytical capabilities. The job titles on the field on Ruby on rails are:-

Disclaimer – The salary chart that is mentioned above is not the same everywhere as it varies with location. 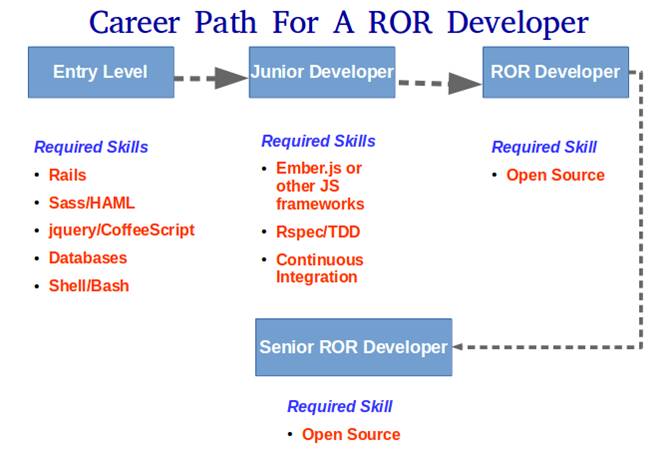 #6. There is a rapid development model in Ruby on rails.

The models of Ruby on rails depend on the convention. It does not depend on configuration. This concept generally means that you can work effectively and quickly with Ruby on rails. It is advisable not to micromanage this technology.

#7. You can get direct access to HTML, CSS and JavaScript

There is no presumptions made by Ruby on rails on how to turn your logic into output. You will have full control over how to present the code. This concept makes it easy to combine the logic of the application to the front ends of the AJAX. This feature of RoR helps you working closely with design experts so that you are making sites. This will be difficult to produce in systems that are less flexible.

#8. The support of vendors

One thing should be clear that Ruby on rails is not available for every host. But most of the hosts do offer it. There are many hosts that offer high-level support and services on Ruby on rails as they mainly specialise in it. There are many companies who are employing quite a large numbers of developers for being part of the RoR team. This gives the most of great knowledge about the services and the products of the company.

#9. Ruby on rails is great for beginners and it has got effective tools

Ruby in rails is really great for beginners and the main reason is that learning Ruby is much easier when compared to other languages. This language is very flexible and it gives more time to absorb programming fundamentals. Ruby does most of the works for you and it is very robust.

The tools are effective and efficient. The rail system is simple and it also already got good numbers of IDEs for the development purpose. Additionally, it has also got excellent traffic tools to fill any need in the rail ecosystem.

Ruby on rail environment has some distinct features in comparison to Javascript and .Net environments. RoR is a great place for those who are more likely to think in codes and also likes to work with scripts. This mode of working does have command-line tools but it is simpler to work with. People do find them comfortable working in this system.

Ruby on rails is the main language based on which some great and big websites are built in around the world like Base camp, Airbnb, Bleacher Report, Scribd and many more. This is indeed on the most I demand learning languages since many start-ups are hiring employees in this field. The community of Ruby on rails is very much beginner-friendly and it has got lots of online resources to learn Ruby on rails. One of the best concepts of Ruby on rails is that it makes us understand that development is the best practices.

Ruby on rails is indeed a very good development tool that will give web developers the proper framework and it also provides a structure for all kind of codes that are written. The framework that is provided by Ruby on rails is helpful in developing websites and applications because it helps in abstracting and simplifying common tasks that are repetitive. It will be helpful to learn ruby on rails as it will make sure you have a great future since this field is highly flourished.