SaltStack holds a very important place in the IT industry. It helps IT organizations secure and maintain each infrastructural element that they use for executing digital business processes. SaltStack develops software that can help companies to automate and secure their digital infrastructure at a vast scale.

Earlier, tools like Chef and Puppet were used for configuration management, and these tools support very slow data processing. Fortunately, with the help of Saltstack, we are able to overcome all these limitations. In this SaltStack tutorial, we will study in detail the SaltStack, the features it supports, and its importance in the digital environment.  The purpose of this tutorial is to represent how SaltStack can be helpful for business IT infrastructure management and security.

Saltstack is an orchestration and configuration management tool which allows the system administrators to perform automation of server management. SaltStack provides high-speed data connectivity and faster communication between the different systems present in the IT organization. Its multithreaded design allows the users to run thousands of tasks simultaneously.

SaltStack Architecture is developed for providing speed and scale.  This is the reason why this architecture is used for managing the thousands of servers at Google, Linked In, and many more companies.

For example - If a user has thousands of servers and the user wants to perform functions on every server. A user would be required to log in to every server and perform functions one at a time. This process will be very complicated and time-consuming as functions like software installation and configuration based on particular criteria may consume a lot of time.

To overcome this problem, SaltStack Architecture has been introduced as one can perform different functions just by typing one command. Thus, SaltStack is a single solution to overcome all such issues

Most of the Saltstack customers are from the United States. The other users of SaltStack software reside in the UK, Canada, India, Brazil, Netherlands, Australia, Germany and, France.

As per the sources, 2821 companies are using the SaltSt ack, most of them are into IT. 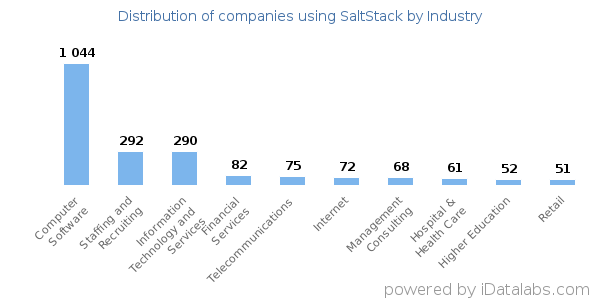 SaltStack supports many useful features that were not present in the previously used Configuration management tools. Some of the important SaltStack features are mentioned below:

Salt Minions are able to connect to multiple masters at a particular moment by the configuration of master configuration parameters as all the available master’s YAML lists.  Every master is allowed to give commands to the Salt infrastructure.

Saltstack supports a very flexible management approach.  The approach can be deployed for following the popular system management models like Agent only, Server only, Agent and Server, or all of them within a similar environment.

With the help of Saltstack, one can effectively manage thousands of minions per master.

The parallel execution model of Saltstack enables the commands to parallelly execute the remote systems.

SaltStack supports a simple programming interface. It is easily extensible and modular thus, it is easy to mold to different applications.

Easy to Set Up

SaltStack is very easy to set up. The single remote execution architecture provided by Saltstack allows to effectively manage the different requirements of the different servers. 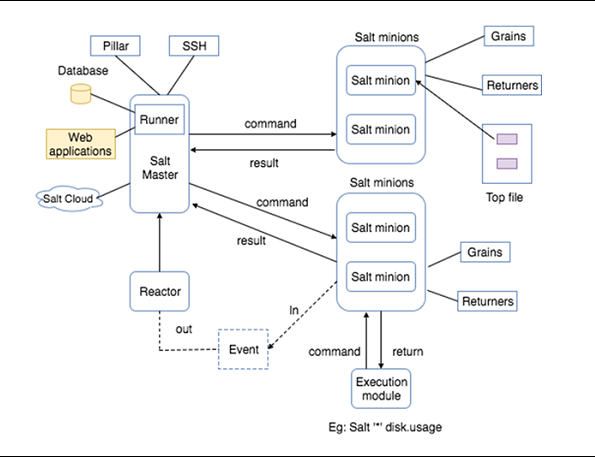 SaltMaster: The salt-master is a master daemon, this daemon is used for sending configurations and commands to the Salt Slaves. SaltMaster is basically a machine that manages the infrastructure and server's dictate policies. A single master is capable of handling multiple Masters.

Execution: Ad-hoc commands and modules are executed against one or more salt-minion from the command line which delivers real-time monitoring.

Formula: Formulas are basically the salt states which are already written. Formulas are just like the open-ended Salt States and can be used for performing the task like installation of the package, configuration of a service, set up users or permissions and many more. 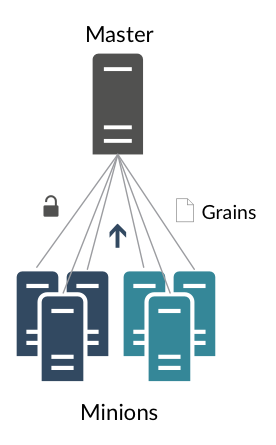 Grains: Grain is an interface designed for providing the information related to Minions,  this information is static. When the Salt Minion begins, Grains also get loaded which simply indicates that information available in grains cannot be changed. Thus, the information in Grains could be related to the operating system for the running kernel. Grains are case-sensitive.

Pillar: A-pillar is an interface designed for generating or storing highly sensitive information specific to particular slave daemons, such as passwords and cryptographic keys.  It stores the information in a key/value pair and the management of data is done just like the salt state tree.

Top file: It is used for matching the Salt States and Pillar Data to Slave Daemons.

Runners: It is a module present inside the Salt Master and responsible for performing tasks like reading data from the external APs,  connection status, job status, query connected Salt Minions, and many more.

Returners: This component is responsible for returning the data from Salt Minion to the other system.

Reactor: A reactor is liable to trigger the reactions at the time when any of the events occur in the SaltStack environment.

Salt Cloud: Salt cloud provides a user with a powerful interface that helps to communicate with salt Minion.

SaltSSH: This component is used to Run the Salt commands on the Secure shell on the systems without any interference from Salt Minion.

So, these are the components included in the Salt Architecture which manages its working.

Salt, Chef, Puppet, and Ansible are the topmost Orchestration and Configuration management tools. Each of them follows a distinct path to server automation.  They were developed for the easy configuration and management of thousands of servers.

Among all of them, Salt is considered to be the best. Let’s understand this concept in more detail that how Salt is a strong competitor for Chef, Ansible, and Puppet.

The list of platforms that are supported by the SaltStack and its competitors is provided below:

For the SaltStack installation, a user must complete the following requirements:

To install the updates, use the following command.

You can install the SaltMaster by using the given ‘apt-get’ command.

For the installation of Salt Minion, you can use the following command.

Install the Salt Syndic with the help of ‘apt-get’ command.

The local interface must have an IP address.

Once you have updated the configuration file, you need to restart the Salt Master with the given below command.

Salt Minion Configuration is an easy process.  Basically, one value is required to be set as the Master Value so that Minion can easily find where the master is located.

After updating the configuration file, restart the Salt Minion by using the given command.

Outcomes produced by this key:

If you want to change the state of the minion, you can use ‘-d’ key, and later you can accept or reject the keys.

A user can accept all the keys by using the following command:

The following keys will be  accepted:

It will produce the output as :

You can use ‘test.ping’ command for the communication between SaltMaster and Salt Minion.

The output it will generate is

Here, ‘*’ sign is representing all the minions.   As we have a single minion that is test.ping, it will execute the ping commands and analyze if the ping is successful or not.

Now we will be creating a simple SaltStack Environment which is discussed along with simple steps:

Once you have installed it, you need to configure it.  For that, create a file with the name Vagrantfile in the folder and describe the machine type and properties.

Command to run Vagrant - vagrant up.

SaltStack offers a demo environment as Vagrant Setup.  This environment is hosted in GitHub.

The response will display after executing the command as result.

Command to login to the SaltMaster - vagrant ssh master

Command to move to the root user - sudo su

Salt master is connected successfully.  Below are some basic salt commands.

The output will be -

As all the keys are accepted, now you can send a command from Salt Master to check whether the Minions are listening or not.

The output will be -

The output is indicating that minions are listening.

SaltStack Access Control System allows the users to execute the task within the authorization.  This system is used for configuring access to Non-Administrative Control Interfaces.  A user can apply the process to different systems.

There are three types of Salt Interfaces:

This system provides access to the users other than root for Salt command execution on Salt Minions from the SaltMaster. The configuration of the Publisher ACL system is done in the Master Configuration file through the ‘publisher_acl’ configuration option.

Here, user 1  can execute anything whereas, user 2  can execute the only pkg and test ( only on the ‘web*’ minions’.

This system is used for providing access for executing the Salt commands on a particular minion via External Authorization Systems such as LDAP, PAM, and many more. This file is defined in the Master file as mentioned below:

User 1 can execute functions in the network or test modules on the Salt Minions which matches the ‘web*’ target.

User 2 can execute anything.

Option ‘-a’ is provided by the salt server for enabling external authentication.

Below are both configurations and explained briefly:

This configuration is defined in the SaltMaster File as mentioned below:

The command is enabling the configuration for all the minions. It is advised to execute this command only in a secure environment.

This configuration lets the minion execute the runner from the master through the peer r-run option.

This command will allow access to all minions to all runners.

How to execute the commands?

For executing ‘test.ping’ on all the minions, you can use ‘salt-call’ command including the ‘publish.publish’ module.

For executing the runner, you can use the below-mentioned command. salt-call publish.runner manage.up

The SaltStack which comes along with a simple file server that is used for distributing the file to different Salt Minions is known as Salt File Server.  It is basically a stateless ZeroMQ server that is developed into the Master.

SaltStack - Git as a File Server

Git is basically an Open Source Distributed Version Control System that is used for keeping the track of modifications made in the file. Salt sends the files using Git File Server from the Git  Repositories.

A user can configure the Git to ‘fileserver-backend’ list option and if the user wants to configure more than one repository, it can be done by using the gitfs_remotes option.

There are a number of benefits of using the SaltStack, and they are mentioned below:

SaltStack works on the ZeroMQ library. ZeroMQ is an embeddable networking and fast messaging library.  Its basic implementation is done in C or C++ and the native implementation for different languages include.Net and JAVA.

It is a peer-to-peer, broker-less messaging process that allows users to design a complex communication process in a simple manner.

There are five basic patterns followed by ZeroMQ:

Synchronous Request/Response: It is used to send the request and receive the revert for every sent request.

Asynchronous Request/Response: A requestor will send the request message to start the conversation and wait for the revert. A provider will wait for the incoming messages and revert back as a response message.

Publish/Subscribe: It is used to distribute the data from a single process to different recipients.  For example- From Publisher to Subscribers.

Push/Pull: It is responsible for sharing the data with all nodes connected.

Exclusive Pair: It is used to connect the two peers in order to make a pair.

ZeroMQ is a flexible tool that allows exchanging messages among various clusters and multi-system environments. It is a  default transport library presented in Salt.

The aforementioned information is providing all the details about the SaltStack Architecture. This architecture has resolved the user’s issue of executing multiple commands on the different servers simultaneously, thanks to its remote execution capabilities.  Salt Configuration Management develops a Master-Minion model to bring the components of infrastructure in line with a provided policy quickly, flexibly, and easily.