To ease the above processes, Michael DeHaan developed an IT engine, Ansible. After some years, Red Hat acquired the Ansible tool in 2015. To use the Ansible tool smoothly, a user needs to be good at running commands in the Linux shell. Having sound knowledge of Linux can be considered a prerequisite for using the Ansible tool.

The Ansible tool is generally an open-source IT engine or tool that automates various application deployments, cloud provisioning activities, intra-service orchestration, etc. Not having any need for an agent or custom security on the client side is regarded as a big advantage of using Ansible.

It is created for multi-tier deployment and it is easy to use as it is completely agentless. It simplifies the process of connecting to clients by using SSH-Keys. When we create an inventory file in which clients’ details like IP addresses, hostnames, and SSH port details are stored, it can connect by using the details.

Ansible describes and carries out automation tasks by using the playbook. The playbook uses a simple language, Yet Another Markup Language (YAML). This language is easily readable and understandable by humans and is mainly used for configuring files but it can be used in various applications where data storage is involved.

It is free of cost so it became very popular soon. Another benefit of using the Ansible tool is the playbook can be read and debugged if needed by IT support staff.

Ansible manages and stores the inventory in the form of simple text files. It connects to your (system) nodes and then pushes small programs, generally known as Ansible Modules to the nodes. It runs the modules on the nodes and removes them when the process is finished

To deploy applications, do cloud provisioning and manage other Information Technology tools, any agent or custom security is required on the client-side. It is not always possible and easy to have these requirements to run and manage applications. There was a need to have an application or IT engine that can help us perform these functions without the need for any agent or custom security on the client-side. 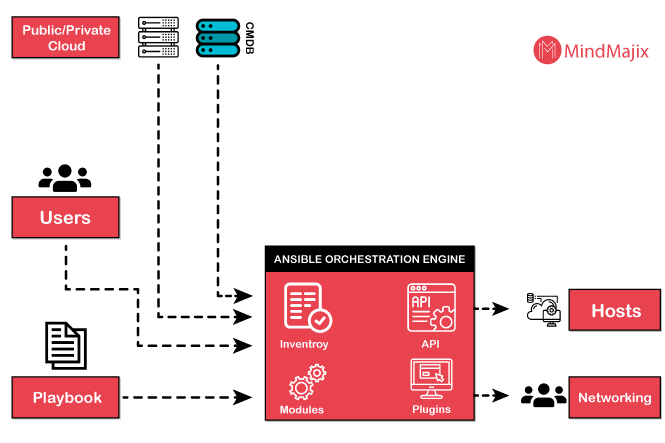 Below is the description of the Ansible architecture:

Ansible connects to your nodes and runs a small program called Ansible modules on the client side. After running the modules, it removes them. These Ansible modules can reside on any machine and do not require any database or server. 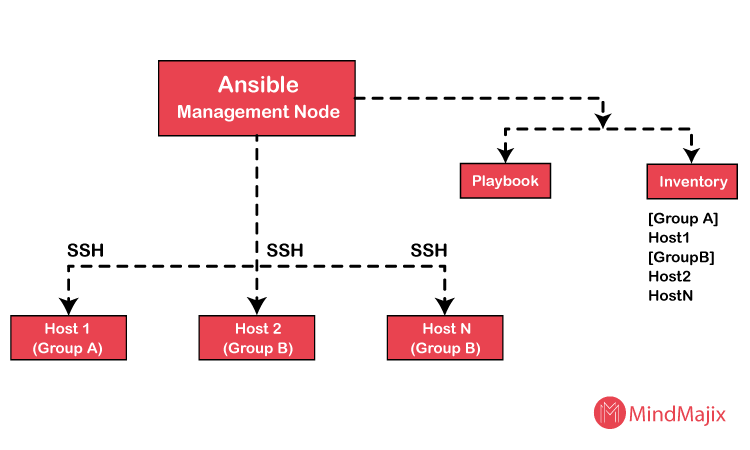 Ansible Inventory can be defined as a group of lists of hosts, servers, IP addresses, etc. and it is used to manage multiple hosts or groups in a single point of time. The inventory needs to be defined first to execute the workflow. Users can edit or write the inventory as per their needs.

The (default) location of inventory is a file: /etc/ansible/hosts. A different inventory can be specified in the command line using -i<path> option. To work smoothly, the Ansible tool has many Inventory plugins. Users can pull the Inventory file from private clouds or public clouds by using different formats like (YAML & INI).

As given above, the default location is /etc/ansible/hosts. Hosts are in INI format in the below example. Headings in the bracket are considered as group names used for classifying the systems. Systems can be put in more than one group. Two servers are given (webservers & dbservers) below.

Host variables: Variables can be assigned to the hosts and they are used in the playbook.

Group variables: Application of variable to a group or more can be done at once.

There is a lot of sensitive data that should be protected by encryption. The sensitive data may include passwords, usernames, important data, etc. The Ansible Vault plays an important part in securing the data on the Ansible tool. It effectively encrypts the data so that Ansible can decrypt it with the help of the key at runtime. It helps users to keep their data safe and protected with the help of encryption. Ansible vault provides the key to decrypt to Ansible to run the vault-encrypted content at runtime.

File-level granularity is implemented by Ansible Vault so the files are either encrypted or unencrypted entirely. It uses an algorithm (AES256) to provide a single password for decryption. A single password is used to do both encryption and decryption of content and it makes it easy to use. Ansible can identify any vault-encrypted data while executing a task.

Encryption: First, a user needs to choose a password for encrypting any existing file.

Decryption: After encryption, the key is sent by the Ansible vault to the Ansible tool. The key is to be entered to decrypt the content or file to extract the encrypted data.

The chef is an automated platform used to transform infrastructure into code. It automates the deployment, configuration, and management of the infrastructure across a network. It is an open-source cloud configuration that can translate tasks related to system administration into reusable definitions also known as cookbooks and recipes. The chef can run on various platforms like Windows, Solaris, Nexus, etc. and it also supports other cloud platforms like AWS, Microsoft Azure, etc.

Some differences between Ansible & Chef are listed below based on different parameters.

Ansible supports the task of setting up and maintaining remote servers but there are certain commands that are used to operate it. The collection of these commands most commonly used is called Ansible Cheat Sheet.

Some of the most common commands used in the Ansible tool are listed below.

This also applies to the playbook: $ ansible playbook myplaybook.yml -u danny

This also applies to the playbook: $ ansible playbook myplaybook.yml  --private-key=~/.ssh/custom_id

This applies to the playbook too: $ ansible playbook myplaybook.yml --ask-pass

Above are some of the commands but for more cheat-sheet commands, please refer to the Ansible official documentation.

Are you looking to get trained on Ansible, we have the right course designed according to your needs. Our expert trainers help you gain the essential knowledge required for the latest industry needs. Join our Ansible Certification Training program from your nearest city.

These courses are equipped with Live Instructor-Led Training, Industry Use cases, and hands-on live projects. Additionally, you get access to Free Mock Interviews, Job and Certification Assistance by Certified Ansible Trainers