Whether configuration management, application deployment, balancing workloads, or scaling in an IT environment, it must be efficiently orchestrated and managed from end to end. Thanks to Ansible and Kubernetes! They are powerful automation tools that perform tasks and activities effectively and consistently. This blog provides a cakewalk to get a clear-cut comparison of the two tools based on their key features, advantages and drawbacks, similarities, and key differences in the best manner possible. Let’s start now!

Advantages and Disadvantages of Ansible

Advantages and Disadvantages of Kubernetes

Ansible and Kubernetes are two simple and powerful configuration automation tools. When it comes to Ansible, it effectively automates cloud provisioning, application deployment, and many more in an IT infrastructure. Considering Kubernetes, it follows the containerized approach to balance workloads, configures, deploys, and scales applications efficiently. No wonder you are now curious about knowing the similarities and differences between the tools.

This blog will detail the tools essential features, pros, and cons, similarities, and differences.

Ansible vs Kubernetes - Table of Contents

Ansible, the product of Red Hat, is an IT automation tool. It allows enterprise-level IT automation to configure all systems and devices in the infrastructure. In other words, Ansible automates the IT requirements such as cloud provisioning, application deployment, configuration, DevOps workflows, network automation, and many more. Know that Ansible uses a simple language YAML in the form of playbooks to perform configuration, deployment, etc.

Ansible allows effective collaborations among teams which in turn empowers IT operations significantly. Mainly, it implements multi-tire deployment managing many systems in the IT infrastructure simultaneously. On the same line, Ansible makes continuous deployments. It uses CI/CD methods to deploy applications in the target environment. Besides, you can scale automation across your enterprises without friction and reasonably control the processes.

Before diving into the advantages and drawbacks of Ansible, let’s understand who uses Ansible and the key features of Ansible.

Generally, operators, IT executives, administrators, release engineers, and IT managers can use Ansible to automate their IT infrastructure. Industries from small scale to large adopt Ansible for automating their IT processes. Especially, Ansible is used widely across IT and services, and communication sectors.

What are the Key Features of Ansible?

Ansible has many excellent features for performing IT automation. Let’s explore them as follows: 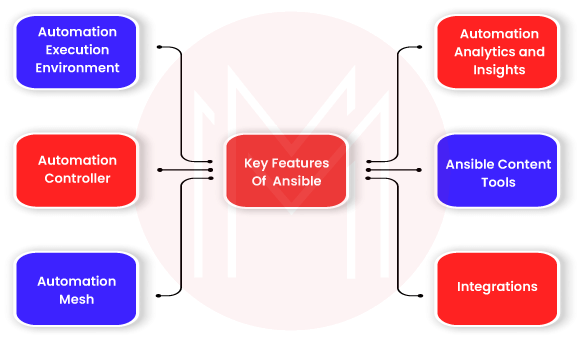 It standardises how automation is deployed, initiated, and audited. Therefore, users can deploy automation confidently. Automation controller has many essential features such as User Interface (UI), Workflow, Role Based Access Control (RBAC), and CI/CD. They help to enhance the flexibility and efficiency of IT automation in a significant way. In the same way, the automation controller helps to manage inventories and workflows, track changes in IT processes, reports, and many more using centralized UI and REST APIs.

With a bi-directional communication layer, the automation mesh simplifies the scaling process. It helps to increase flexibility in deployments automatically, and at the sametime – without compromising control and visibility. Moreover, automation mesh has many security features such as digital signing, additional access controls, TLS traffic encryption, etc.

Analytics and insights measure the performance of the automation carried out by Ansible in-depth. In other words, analytics and insights provide the health status of automation with actionable data so that you can make informed decisions. Simply put, they help to track and manage automation closely. As a result, you can dramatically reduce risks and threats, and potential downtime in the IT infrastructure.

What are the Advantages and Disadvantages of Ansible?

Let’s now know the advantages of Ansible below:

No tool is perfect, undoubtedly. So, Ansible also has a few drawbacks. Now, we will check them out below.

Kubernetes can be used in banking, software development, IT and services, communications, finance, etc.

Well! Before diving into the advantages and drawbacks of Kubernetes, let's see the overview of Kubernetes as follows:

What are the Key Features of Kubernetes?

Kubernetes is nothing short of Ansible in terms of its features. Let’s discuss the features of Kubernetes as below: 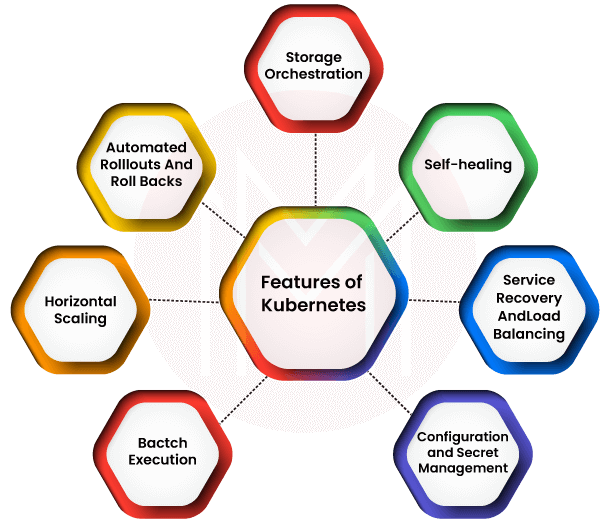 Know that the growing ecosystem of Kubernetes simplifies deployment solutions. Without killing instances in the infrastructure, Kubernetes rolls out changes in applications and configuration seamlessly. Of course! Kubernetes automatically creates new containers replacing existing ones if they don't function properly.

Kubernetes automates storage systems – no matter whether they are in the cloud or on-premises. For instance, the storage system may be on-premises or public cloud providers such as GCP, AWS, etc. Or, it may be shared network storage such as iSCSI, NFS, etc.

With the help of Pods, Kubernetes balances loads among applications. When traffic to a container is high, Kubernetes distributes the load to other containers and balances it efficiently.

Kubernetes allows you to confidently store passwords, OAuth tokens, and SSH keys. Without rebuilding images, you can deploy and update secrets as well as application configuration in Kubernetes.

You can scale applications up and down with a single command. Or else, it has to be performed with the support of GUI.

What are the Advantages and Disadvantages of Kubernetes?

Similar to Ansible, Kubernetes also has many pros and cons on its side. Let’s take a look at them below:

No wonder Kubernetes has a few drawbacks as well. Let’s have a look at them.

What are the Similarities Between Ansible and Kubernetes?

Know that many similarities exist between Ansible and Kubernetes. The following chart will help you briefly know the similarities between the two.

What are the Key Differences Between Ansible and Kubernetes?

Many differences exist between Ansible and Kubernetes, although they have many similarities between them. Let's compare the differences as follows:

[ Also Check out Kubernetes vs Openshift ]

We hope this blog should have helped you understand Ansible and Kubernetes from all corners. To sum up, although Ansible is a new tool, it is increasingly being used by many companies simply because of its key functionalities. On the other side, Kubernetes has a large user community because of its load balancing, scaling, and deployment capabilities. In short, Ansible is a simple, flexible, powerful, easy-to-use, and efficient tool. On the other hand, Kubernetes is a self-monitoring, scalable, load balancing, and flexible tool. All right! Which one is the best tool – Ansible or Kubernetes? Now, the ball is in the hands of users. Yes! It ultimately depends on users' requirements to choose the tool that will satisfy their needs.