If you're looking for SAP ABAP Interview Questions for Experienced & Freshers, you are in the right place. There are a lot of opportunities from many reputed companies in the world. According to research SAP ABAP has a market share of about 3.0%. So, You still have the opportunity to move ahead in your career in SAP ABAP Programming Tutorial. Mindmajix offers advanced SAP ABAP Interview Questions 2022 that helps you in cracking your interview & acquire a dream career as SAP ABAP Developer.

We have categorized SAP ABAP Interview Questions into 2 levels they are:

2. What are the functions of Lock Objects?

3. Define the various contents of the Technical Specifications

5. How can a cluster table be created?

1. Differentiate between Structure and table in the data dictionary of ABAP.

The following are the differences between table and structure -

3. What is the meaning data dictionary in ABAP?

The differences between Function Groups and Function Modules are as follows -

5. What are the functions of Lock Objects?

The same data can be accessed by various programs and Lock Objects which is a particular feature of ABAP that synchronizes the access to these data. Particular programs help in accessing the data records. Sometimes, inconsistencies appear when data gets inserted into the database and in order to avoid this, Lock Object is used.

6. What are the functions of a message command available in a report? Mention its types.

The message ID gets specified right at the start of the program and this is available in the reported statement. Message command helps in displaying the message ID. Message-ID includes a 2-character code that helps in defining a total set of 1000 total messages and message command defines what sets are to be used in the program.

7. Why are insert and append statements used in SAP ABAP?

At the end of the internal table, a record gets added to the specific work area, and the Append statement helps in adding this record.

A record at a specific location gets added with the help of Insert Statement.

Different kinds of forms are created by the Graphical design tool with the help of Smart Forms.

10. Why is a pretty printer user in ABAP?

The pretty-printer is used to format the code of ABAP.

11. Differentiate between transparent and pool tables.

Batch Data Communications that is BDC is a type of procedure. This automatic procedure is mainly used for transferring large data into the SAP system. The main component of the transfer is known as the Queue file. This file gets hold of the data with the help of batch input programs. These programs and groups are associated with various sessions.

13. What are the different types of data classes? Define them.

The data classes are divided into the following -

14. What is the meaning of a foreign key relationship?

The data consistency is ensured by using a foreign key. The relationship must be defined explicitly. In order to ensure that no contradiction is there, the data which is entered must be checked. In a foreign key relationship, cardinality must be totally specified.

16. Differentiate between OOABAP and ABAP.

17. What is the meaning of table buffer? This buffer is used by which type of table?

The word buffer here refers to the memory area. The information about the table is found on the application server and this is the meaning of table buffer. In fact, even the data of the database table actually comes from the application server.  Cluster tables can't be buffeted but however, transparent and pool tables can be buffered.

18. How can a cluster table be created?

The following steps must be followed to create a cluster table -

19. Differentiate between Table and Template.

The main difference between Template and Table is that the former is dynamic in nature whereas the latter one is static in nature.

The resources of the applications of R/3 are managed with the help of SAP dispatcher which is basically a control agent.

21. How can the standard tables of SAP be modified?

22. What are the various events associated with Screen Programming?

The following are the events associated with Screen Programming -

23. What are the main events of which are used for Logical Database?

The main events used for Logical Database are as follows -

24. How can End-of-selection be used?

ALV is the abbreviation of Application List Viewer. ALV functions are provided by SAP in order for enhancing the report output. These function modules help in improving the readability and the functionality of the output report. Even the columns can be arranged with the help of this tool.

26. Differentiate between report and dialog program.

27. Mention the various types of objects of the data dictionary.

The following are the data dictionary objects -

28. What are the various types of parameters and how are they distinguished from one another?

There are mainly two types of parameters -

The following are the different types of database integrities -

31. What statement will be found in an SAP application program that implements a function module exit?

BADI stands for the Business add-in. BADI’s are a relatively new enhancement concept that makes use of ABAP Object technology. This is a truly object-oriented approach to SAP enhancements using classes, interfaces, and methods to implement the BADI 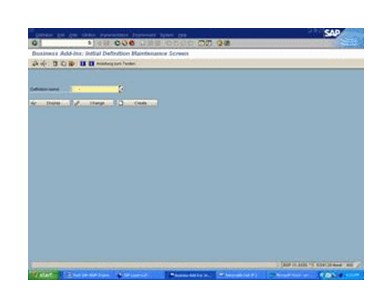 33. Explain the relationship between a functional area, user group, and query when developing queries using the SAP Query tool?

The first WRITE statement encountered in an ABAP program will trigger list processing. Upon completion of the program, the list is output.  The system will generate some standard headings for list output that includes the program name and a page number in the heading.

35. What two statements are required in an ABAP program to output an icon using a written statement?

There are 2 statements required in the ABAP program:

1. The INCLUDE or INCLUDE   statement is required in the program.
2. The WRITE statement will have the following syntax:  WRITE AS ICON.