What is Apache Camel? - A complete beginners tutorial

These days, Data sharing between companies has increased enormously. Numerous integration of applications has increased as well. The user interface uses various technologies, data formats, and protocols. Yet, integrating such applications is modeled in a customized way, concerning efficiency and support by automatic tests.

What is Apache Camel?

Apache Camel is an open-source integration framework depending on Enterprise Integration Patterns. It allows users to define mediation rules and routing in several specific languages, such as Java-based Spring, Blueprint XML, or Fluent API configuration files.

Apache Camel executes EIPs and provides a standardized, internal Domain-specific language (DSL) to integrate applications. Hence, the framework can be deployed with several standalone Java applications and servers such as Tomcat, Wildfly, or fully-fledged enterprise service.

The features of Apache Camel are as follows:

The Apache Camel architecture includes three main functions as Components, Processor, Integration Engine, and Router. The Camel core includes 13 essential components and 80+ components of minor components. It helps in maintaining low dependency where it can be deployed.

The components offer an Endpoint interface to the eternal world. The Processor is used to mediate and manipulate messages between Endpoints.

Processor and Endpoints are wired with each other in the Integration Engine and router using DSLs. EIPs are executed in this module. When wiring, use the filters to filter messages depending on user requirements.

Where command can be any string to identify the type of command to use.

This endpoint can be used to connect existing routes in the same camel context.

Where someName can be any string to identify the endpoint uniquely.

Its endpoint is configured by URI syntax:

Where name is the name of the scheduler that is created and shared over the endpoints.

The URI format includes templateName that can be

Enterprise Integration Patterns (EIP)s can be used to break the integration issues into smaller pieces and create them using standardized graphics. Even a non-technical person can understand the models easily. With the help of EIPs, Apache Camel reduces the gap between implementation and modeling. There is a relationship between Apache Camels EIP and the DSL models.

CamelContext offers access to all other services in Apache Camel. The CamelContext is the Apache Camels runtime system that connects various concepts such as endpoints, components, or routes.

Java DSL has IDE support. Scala and Groovy DSLs are as same as Java DSL. Besides, they provide features of JVM languages such as closures or concise code. Spring XML DSL requires XML, and it gives a powerful Spring-based dependency injection technique and abstractions to basic configurations (such as JMS or JDBC connections).

Even any combination can be made. Many developers use Spring XML to configure while routes are noticed in Groovy, Java, or Scala.

How to create a new project?

To build a Camel project, do the following steps:

To create a new project, specify the following.

Select the default location of the project or specify the directory.

Open pom.xml to add the dependencies.

Note: Make sure to use a minimum number of dependencies of our application. As we use more components from the library, it is required to add the respective dependencies in the .XML file. 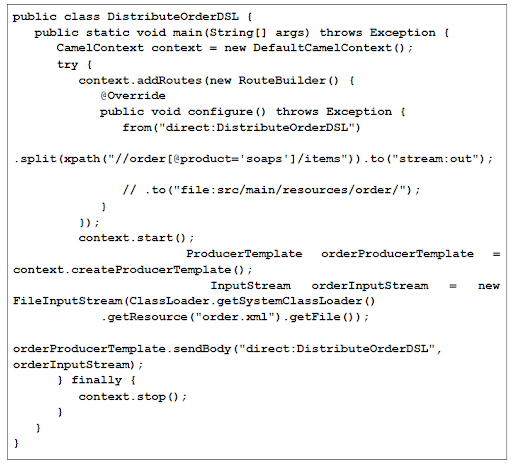 Now, add a route by creating an unknown RouteBuilder.

Override the configure method to add a route from the direct URI DisributeOrderDSL to the system console.

Add the code for creating the direct URI- DistributeOrderDSL.

Java DSL code is completed, add the order.xml file to the project, and it is good to go for testing.

Run the application; you will get the following output.

Ensure that only orders are listed. If you want to store these results in a local file, then comment on the stream. out and uncomment the configure method by the following line.

This is how we create a new Maven project.

We recreate the application using Spring. To create Camel routing in XML instead of DSL, do the following steps.

Create a new project and specify the following.

Select the default location or specify the directory. 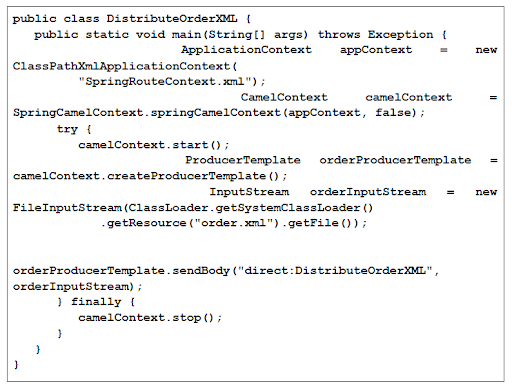 Create a new Java class known as DistributeOrderXML and add the code given below. 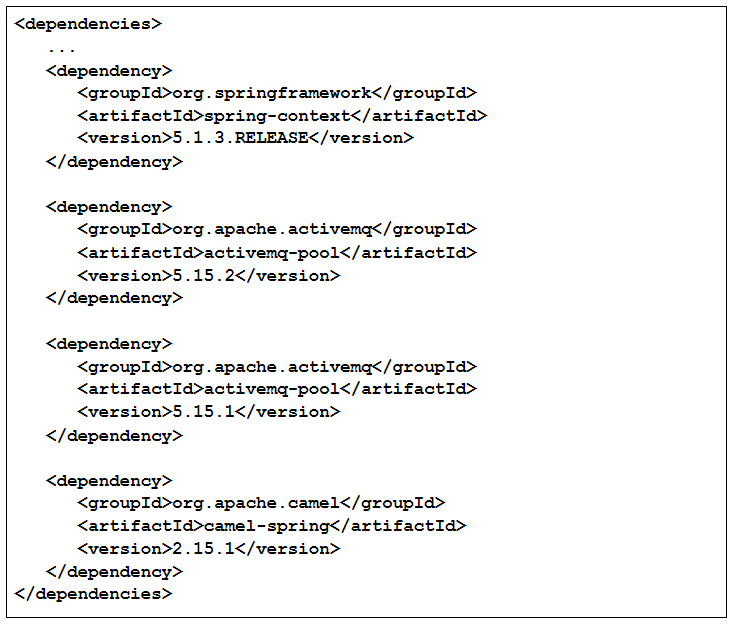 We create an example of ApplicationContext that is the central interface in the Spring application. Now specify the XML file name that includes routing and filtering details.

Start the CamelContext using the start method. We define the Endpoint for loading the order.xml file and start processing.

Add a new XML file to the project and call for SpringRouteContext.xml. Use the code given below. 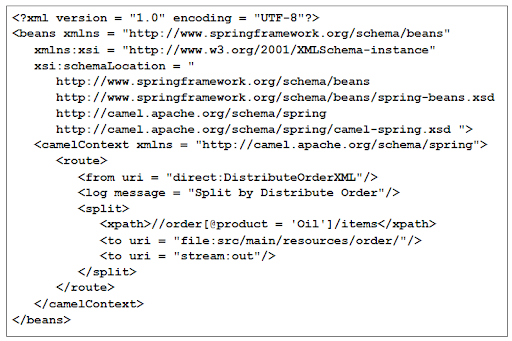 Here, we define the XPath query. Note that we now select all orders.

The output Endpoints are numerous. The first endpoint defines the order folder, and the second endpoint represents the console.

After running the application, you will get the following output on the screen.

Check the order folder in the path specified. You will find the newly created file that includes the above XML code.

Apache Camel offers a framework to implement EIPs to make it easy for integrating the projects. It also supports coding in Domain-specific Languages (DSL) and even the XML file. Camel supports all the requirements used in Enterprise projects such as scalability, monitoring, transactions, and error handling. The most important advantage is that the same syntax and concepts can be used anytime, even for automatic tests, whatever the technologies have to be integrated.