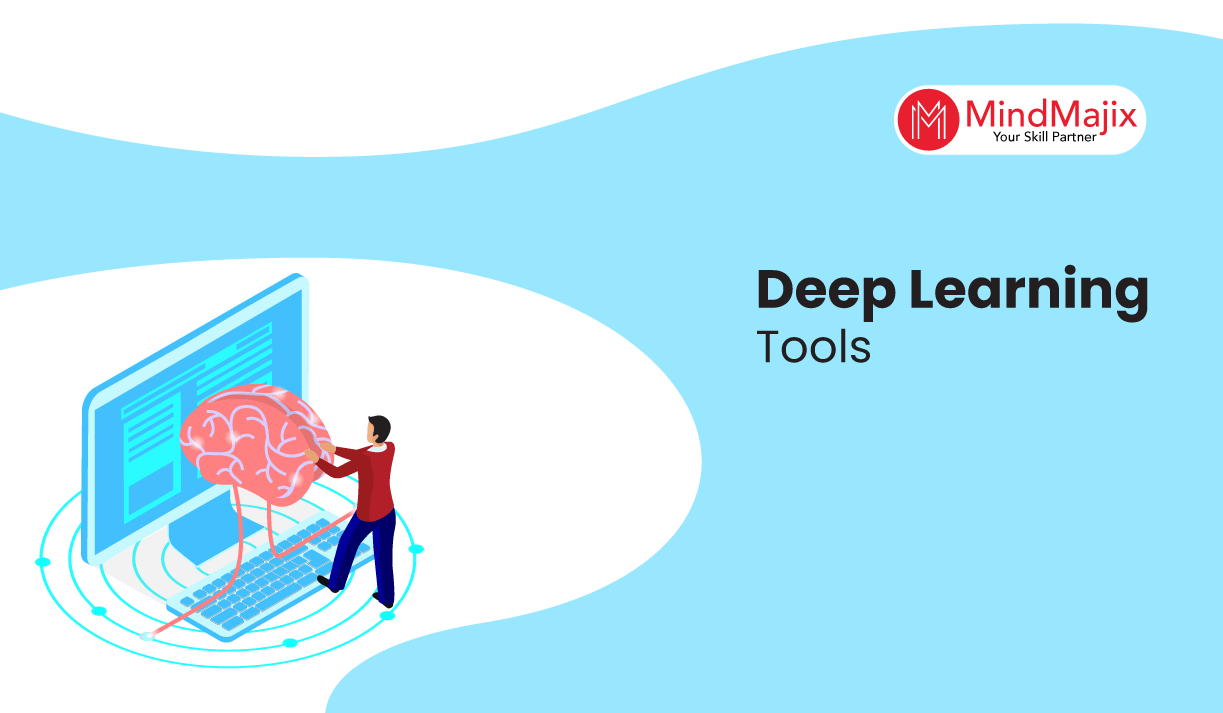 Deep learning, the subset of machine learning, is classified as the functional and practical side of Artificial Intelligence. It empowers computers to learn things just like humans. Deep learning tools allow data scientists to create programs that can power a computer or a machine to learn like the human brain and process data and patterns before executing decisions.

Deep Learning can be regarded as a catalyst that automates the core of predictive analytics. By its looks, predictive analytics is the advanced form of analytics that uses new and historical data to forecast activities. The conventional algorithms in machine learning are essentially linear; however, with deep learning, the algorithms are entirely stalked in the form of hierarchy to oversee enhanced abstraction and complexity. The blog covers an introduction to deep learning alongside a holistic guide on deep learning tools for maximum productivity.

Deep Learning tools rely on predictive modeling and statistics, which helps data scientists collect, interpret, and analyze massive amounts of data. These tools help seamlessly to detect objects, translate languages, recognize speech, and make decisions accordingly. For instance, if you create an application using deep learning tools or programs without the need for human supervision. It draws data and lays out ways by which you can interact with the file system and directory on any computer. At the same time, programmers can use ADO.NET to communicate with relational databases

How does Deep learning work?

Computer programs that utilize deep learning go through a distinctive process for identifying the subject and learning about it. In these programs, each algorithm is placed in the form of a hierarchy that further appeals nonlinear transformation (A set of data that uses functions to interchange linear relationships between distinctive variables) to both its input and operates to provide an acceptable level of accuracy.

A computer program powered by deep learning features a predictive model that encompasses training sets by processing millions of pictures and descriptions. Further, identifies any said images in a few minutes. Also, it achieves a moderate or even an acceptable range of accuracy; deep learning programs would need access to massive processing power and training of data. The optimum power and avenue of deep learning weren't available to the programmers before mainstreaming cloud computing and big data. Even if the data is unstructured or not labeled, it still creates the perfect predictive models in massive quantities.

Let's dig into what are the different deep learning tools that programmers use extensively.

H20.ai is a cutting-edge end-to-end Artificial Intelligence hybrid cloud that aims at democratizing AI for everyone. The open-source leader in Artificial Intelligence is developed from the ground up by using Java as its core technology. H20.ai has been efficiently integrated with several other products such as Apache Hadoop and Spark. Further, giving an exponential rate of flexibility to users and customers across the world. The platform allows almost anyone to implement machine learning and predictive analytics to solve resilient business problems.

H20.ai makes use of an open-source framework equipped with a seamless web-based Graphic User Interface feature quite a seamless interface. The tool offers significant scalability that is ideal for real-time data scoring. The standard support for data-agnostic strengthens all file types and shared databases.

The professional application is written in C++, and it is developed by Artelnics, a start-up based out of Spain. The proprietary software tool can run on OS X, Microsoft Windows, and Linux. Neural Designer is based on Deep Learning neural networks, which also serves as a primary area for artificial intelligence research. The application discovered the unforeseeable patterns, further predicting the actual trends from the data sets via neural networks. The European Commission reportedly chose Neural Designer as a disruptive technology in 2015.

Over the years, Neural Designer has become the most to-go application on desktops to facilitate data mining. Moreover, the application utilizes neural networks in mathematical models by mimicking the human brain's functionalities—Neural Designer aids in building computational models that act on the central nervous system. Deep architectures are embedded within the application to solve pattern recognition, function, autoencoding problems.

The toolkit further describes the neural networks as a sequential computational step directed through a graph. Specific applications and products from Microsoft such as Cortana, Skype, Xbox, and Bing use Microsoft Cognitive Toolkit to generate industry-level AI.

Torch is a notable open-source scientific computing framework, machine learning library, and a significant script language based on the multi-paradigm Lua programming language. As an efficient open-source program, Torch provides numerous algorithms used in deep learning, and it uses LuaJIT as its underlying scripting language. Additionally, Torch also features C/CUDA implementation that makes use of GPU while supporting machine learning. Torch's N-dimensional array features with several routines to transpose, slice, and index are regarded as the best-in-class. Torch works with Android, iOS, and other operating systems because of the excellent GPU support and is deeply embedded in its library.

Sadly, since 2018, no further development was done to Torch, and as bad as it sounds, the open-source machine learning library has helped bring PyTorch into existence. On the other hand, PyTorch was developed by FAIR or Facebook's AI Research lab. The new machine learning library is generally used for NLP or Natural Language Processing and the interdisciplinary scientific study, Computer Vision. Here, the NLP application is the subset of artificial intelligence, computer science, and linguistics. In contrast, Computer Vision deals with how computers use videos and digital images to obtain a high-level of understanding. PyTorch is written in C++, CUDA, and Python.

Some of the notable examples of the deep learning software built with PyTorch as the foundation include Pyro by Uber, Transformers from HuggingFace, Tesla Autopilot, Catalyst, and PyTorch Lightning. Additionally, PyTorch also features two notable features such as:

Deep neural networks that are built on algorithm differentiation systems.

This deep learning framework can be found in most Apple products such as OS X, iOS, tvOS, among others. The Cupertino giant uses the framework to support the already training deep learning modules on the Apple devices that boasts GPUS. With the help of Deep Convolutional Neural Network, the DeepLearningKit carries out tasks like image recognition. As of now, DeepLearningKit is being trained with the Caffe Deep Learning framework, where the long-term goal is to support other popular models such as Torch and TensorFlow.

ConvNetJS made out from Javascript library to train many Deep Learning models via Neural Networks through the web browser. With ConvNetJS, once you open a tab on the browser, you'll begin to train Deep Learning models. Users can formulate ways with ConvNetJS to derive a solution for Neural Networks. As an utterly experimental reinforcement module for learning, ConvNetJS is based on Deep Q Learning. It doesn't rely on other compilers, software, GPUs, or installations for optimum productivity.

Several Artificial Intelligence communities often contribute towards improving this deep learning tool, which has led to the library's overall extension. At the time of writing, the complete source code of ConvNetJS is available on the open-source community for developers, GitHub, under the open-source initiative MIT License. ConvNetJS will train as well as specify the AI-based convolutional networks for process images relentlessly.

Keras offers minimal yet highly productive functionalities through its deep learning library. Keras is written in Python as a deep learning API, and it runs above TensorFlow, a machine learning platform. Keras was developed to bring out fast experimentation. It is approachable and offers an extensively productive interface to solve several machine learning problems by focusing on a modern approach to deep learning. Other than TensorFlow, Keras also works excellently with Thenao. The essential benefit of Kera is that it can take the idea of a developer and guide him/her through definitive results without any hassle.

As API Keras is written in Python, the high-level neural network can run either on Theano or TensorFlow. Users can expect fast and easy prototyping with complete extensibility, modularity, as well as minimalism. The API also supports recurrent networks, convolutional networks, and unification between the both and certain arbitrary connectivity schemes such as multi-output and multi-input training.

Deep learning has been in existence since 1943 due to Walter Pitts and Warren McCulloch. The duo created a basic computational model capable enough to work out through neural networks by utilizing algorithms and mathematics. However, the technology did not become mainstream until the mid-2000s. In the past ten years, deep learning models have reportedly generated several advancements in the realm of artificial intelligence.

Deep learning has also made it possible to integrate AI with simple or even complex applications like video games, robotics, and the need-of-the-hour self-driving cars.

If you want to know more about deep learning and artificial intelligence, check out our AI and Machine Learning courses to develop your career and learn new skills.