Golang, popularly known as Go, is an open-source programming language designed at Google by Rob Pike, Robert Griesemer, and Ken Thompson in 2007. This language offers all kinds of features that developers like, such as structural typing, garbage collection, and more. It’s also been a high-paying programming language for the last few years due to its extensive use in various applications and platforms.

This Golang Tutorial walks you through all the essential concepts of Golang, from the absolute basics to all the way up to advanced features. Our Go tutorial is suited for both beginners and experienced developers. With the help of this, you can learn and polish your skills in Golang.

Go commonly known as Golang, is a programming language. It is a freeware programming language originally developed at Google. It allows parallel programming, i.e., multiple programs are executed concurrently. The Syntax of the Go Programming Language is identical to C Programming Syntax. It supports garbage collection and contains many built-in functions. The program execution procedure used in GoLang is similar to that of C Programming.

The language began rising almost as soon as it was released back in 2009. It quickly started drifting from below position toward the top positions around the world.

According to the latest reports, there is considerable demand for Golang and popularity among developers, and it also falls under the list of top learning programming languages for the year 2021.

The best features of Go are as follows:

Download and install Golang with the simple steps described below.

Step 1: Go to https://golang.org/dl/ and download the binary release of your operating system. 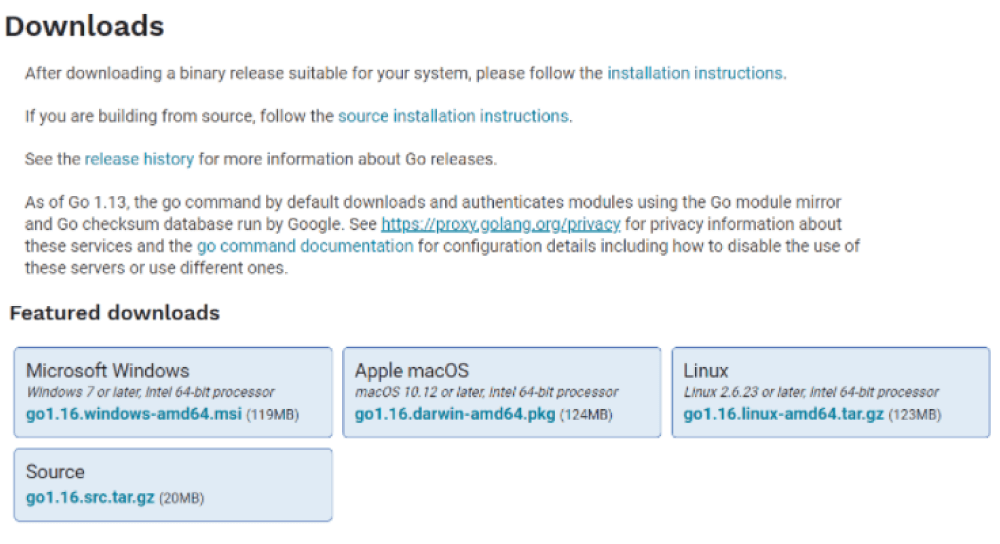 Step 2: Double-click on the installer and click on Next to set up the wizard. 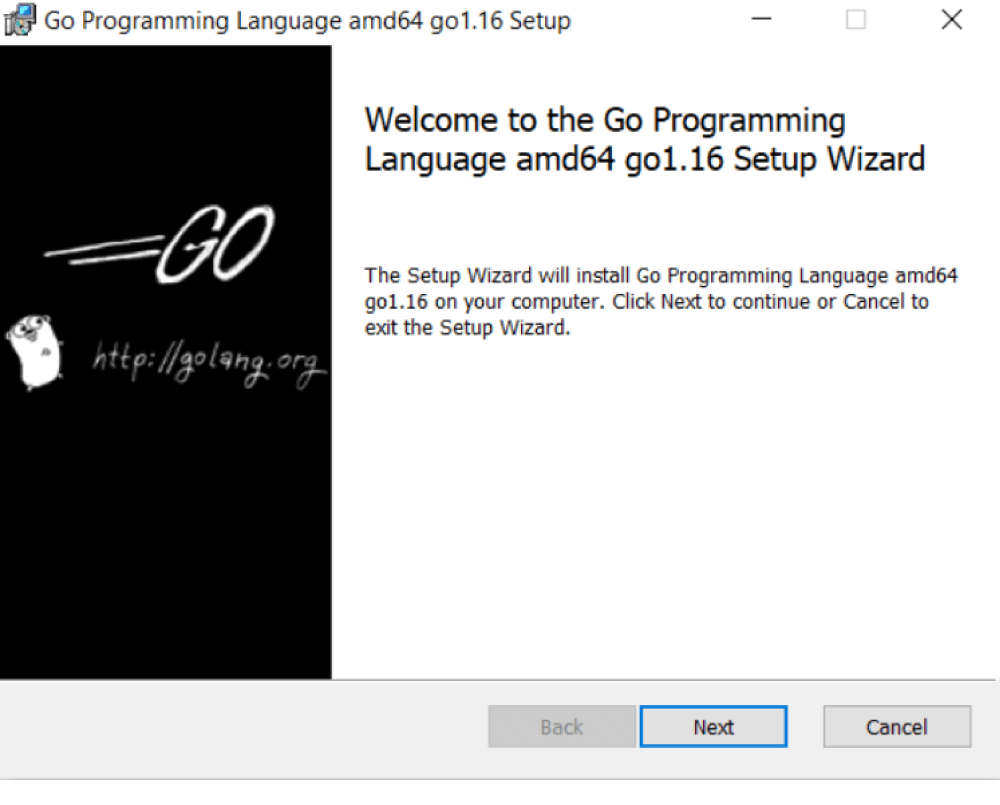 Step 3: Click on the Next option to accept the end-user license agreement. 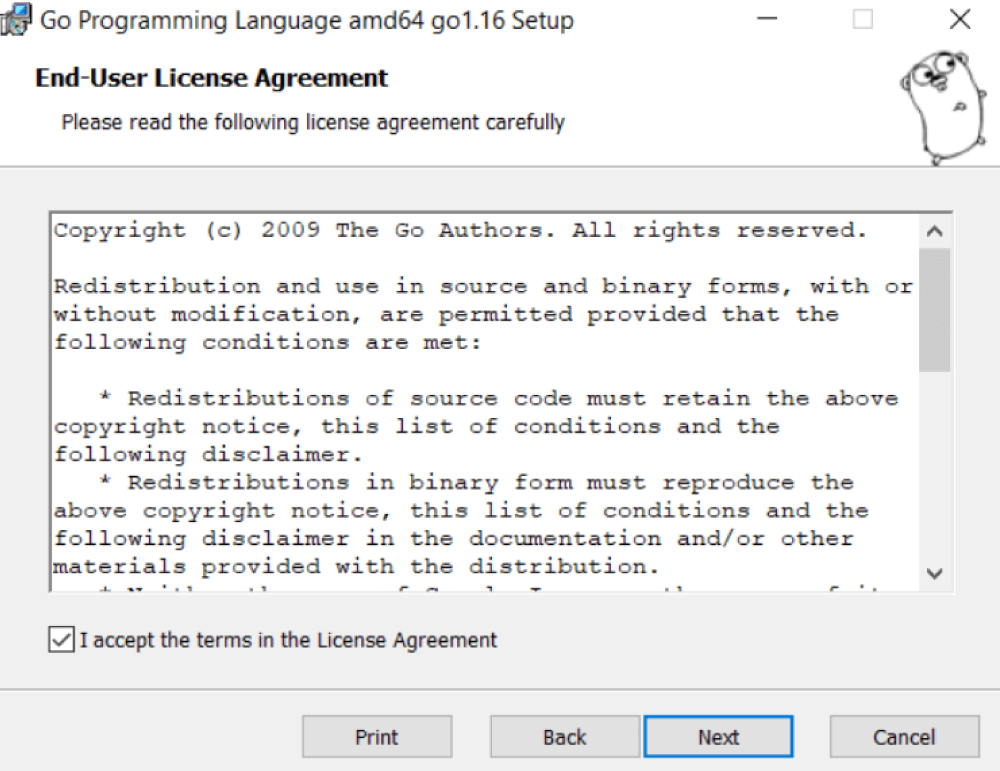 Step 4: Select the installation folder and click on Next. 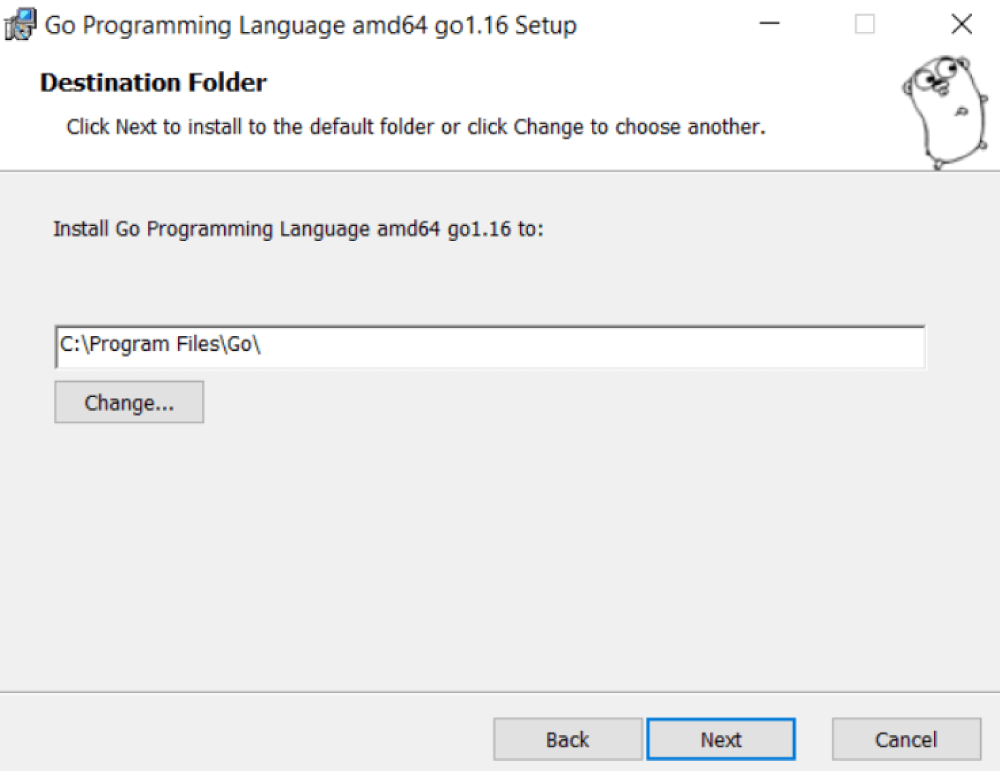 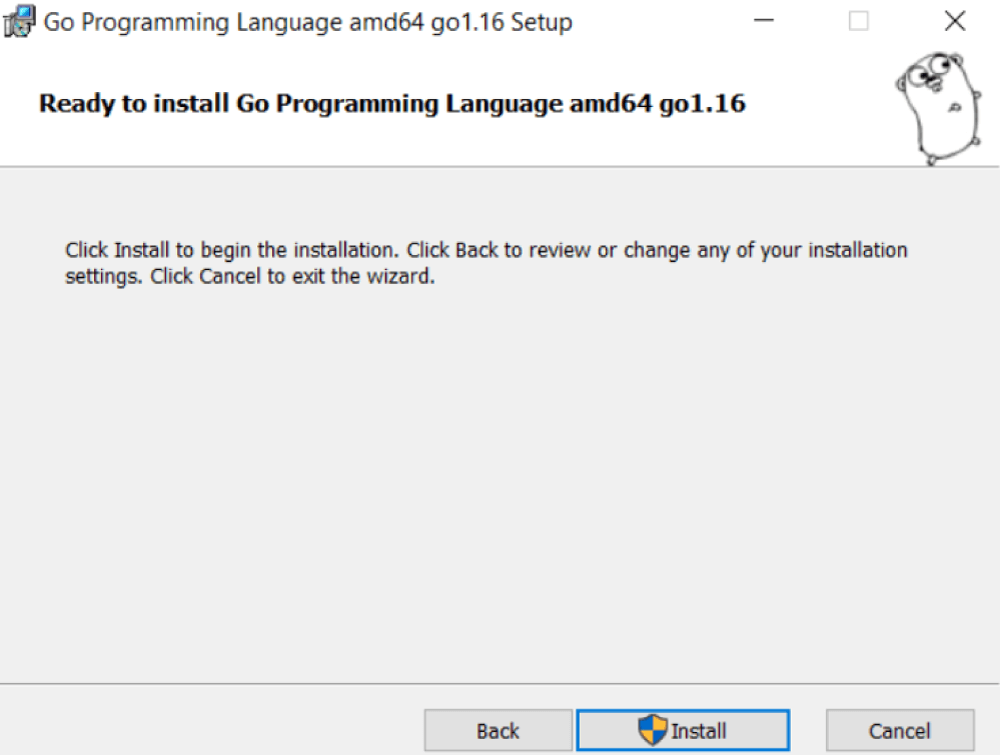 Step 6: Once the installation is done, you can verify it by opening the terminal by typing

This will display the version of Go installed.

Go files are created using the .go extension, and Go programs are run using the syntax:

Create a file trial. go and add the below code into it

Now run the file trial. go to see the result

1. Basic Structure of the Golang Program

In the above program, we have the following statements:

After writing the program, we have to execute the program. Let us see the procedure for executing a program.

For Executing a Go Program, we have to follow the below steps:

Step 1: Write the Go Program in a Text Editor.

Step 4: In the command prompt, we have to open the directory to save our Program.

Step 5: After opening the directory, we have to open our file and click enter to compile our code.

Step 6: If no errors are present in our code, then our program is executed, and the following output is displayed:

Data types are used to declare variables and functions. Data types indicate how much space should be allocated to a data member, like variables, functions, etc. In the Go Programming language, Data types are classified into different types:

A Variable is defined as a name mentioned to a memory location that the program can control. In the Go programming language, every variable will have a data type, which indicates how much memory is required for storing that variable.

In the above statement, the optional_data_type contains Go data types like int, string, float, boolean, etc. The variable_list1 comprises the list of variables.

At the time of declaring a variable, it can be initialized with certain values. According to the values initialized to the variable, the compiler evaluates the data type of that variable. Variables are initialized through the assignment operator “=”.

The syntax for a variable initialization is as follows:

The Static type variable declaration gives the compiler that only one variable exists with the given name and types such that the compiler can continue further compilation excluding other details of the variable.

In the Dynamic Type Declaration of a variable, the compiler has to evaluate the type of the variable according to the value initialized to it.

Constants are defined as permanent values such that programs may not change them at the time of program execution. While declaring constants, we should use the “const” keyword.

An operator Symbolically tells the compiler to do particular arithmetic or logical operation. The Go Programming language supports the following operators:

In the Go programming language, we have several arithmetic operators. They are as follows: Let us imagine that we have two integer variables like C=10, and d=50.

The Go Programming language supports different logical operators who are as follows:

The Go programming language supports different assignment operators; they are as follows:

The working of Logical operators is the same as Logical Operators. The truth tables for Bitwise operators are as follows:

The Go Programming Language Supports two Miscellaneous operators, which are

syntax of “If” statement is :

If the condition present in the “if” block is true in the above code, then the statement1 is executed; otherwise, statement2 is executed.

The syntax of the If-else statement is as follows:

If the condition present in the “if” block is true in the above code, then the statement1 is executed; otherwise, statement2 is executed.

The syntax of the "Nested If" statement is as follows:

Select Statement is identical to switch statement; the only difference is case refers to the channel communications.

The Loop or iterative statement enables the programmer to execute the same statement multiple times. In Go Programming Language, we have different loop statements; they are as follows:

The for loop executes a series of statements repeatedly. The syntax of for loop is as follows:

In Go Programming, nested loops provide the facility to run multiple loops inside another loop.

In Go Programming Language, strings are also known as slices. Strings are defined as collections of bytes. Strings can be created as follows:

In Go Programming, we have the following Manipulation functions:

Golang provides another important data type named Maps which maps unique keys to values. A key is an object that performs data retrieval of a value at a later date. Given a key and value, you can store a value in a map object. After storing the value, you can retrieve it using its key.

The array is a data structure that stores a fixed size of elements in sequential order. An array stores the elements which have the same data type. The array comprises contiguous memory locations.

In Go Programming, we can declare the array as follows;

The above statement says that an array named “A” stores ten integer elements. The above array is a single or one-dimensional array.

In Go Programming an array can be initialized as follows:

The elements of an array are accessed through their indexes.

The above statement says that the fifth element of the “A” array, is stored in the integer variable “a”.

A function is a self-contained program or a module in the program. It contains certain statements to do a specific task. The syntax of the function is as follows:

In the above code, we have:

A program calls the function to do a particular task. After doing that task, the function will return the result through the return keyword.

The pointer is a variable that stores the address of another variable. The pointer variables can be declared as follows:

We have declared an integer pointer variable.

We have declared an integer variable “c.”

We have declared an integer pointer variable “e.”

By using the “&” symbol, we have stored the address of the variable “c” into the pointer variable “e”.

Structures are another data type that exists in Go Programming. They are used to declare a record in the program. To declare a structure, we should use struct and type statements. The struct statement acts as a data type for structures. An example of a structure is as follows:

In the above code, a structure called “student” is declared. The data members of that structure are 1) id 2) string 3) percentage 4) rank. Depending on the values they store, we have assigned the data types to the data members. For example, the

The data members of a structure are accessed using the dot “.” operator. For accessing structure members, we will create structure variables.

We have created a structure variable called “stud1”; through this, we will access the structure members.

Recover is a built-in function in Go. It is used to regain control of a program from error conditions. It resumes the normal execution and stops the terminating sequence.

The defer keyword is used to postpone the execution of a function or statement until the calling function ends. They are generally used for executing closing statements.

Panic is a built-in function in Golang. It is similar to throwing an exception like in other languages. It is used when normal execution flow stops immediately, but the deferred functions are executed normally.

Go Programming language supports interfaces to include methods in the Go Program.  Structures use methods to access data members.

The integer variables a and b are converted into float variables.

Go supports the concurrent execution of tasks. It means executing multiple tasks simultaneously. Programs that run their smaller components at the same time are known as concurrency.

In Golang, concurrency is achieved using Goroutines and Channels.

A function or method that runs concurrently with other functions or methods is called Goroutine. They are much lighter than threads. Goroutine is invoked using the keyword go followed by a function call.

Channels are a way of communication for functions to associate with each other. It acts as a medium where one routine places data and is accessed by another routine in the Golang server.

A mutex is a method used as a locking mechanism to ensure that one Goroutine can access the critical section of code at any point. Two methods defined on Mutex are Lock and Unlock.

If one Goroutine already has the lock, then the new Goroutine will be stopped until the mutex is unlocked.

Golang programming language has a very bright future. In the last few years, it has skyrocketed to the top 10 of all language ranking indices. Today’s renowned companies like Facebook, Netflix, Uber, etc., are also using Golang.

A survey by HackerEarth also shows that out of 16,655 developers, over 32% of working professionals referred to Go as “the most sought-after programming language.” This clearly indicates that the future is filled with opportunities for Golang developers.

You can expect even more experts to develop and manage Go projects in the coming future. The exciting and advanced features of Go will surely make it a contender for the next-generation programming language.

This brings us to the end of this Golang Tutorial. We hope everything shared in this tutorial is useful for you. Do stay tuned for more Golang-related blogs. If you have any queries related to the tutorial or want a blog post on any new topic from us, let us know in the comment section below, and we would like to help up.