Microservices, also known as microservice architecture, is an architectural approach that organizes an application as a series of interconnected services. Microservices are designed to accelerate the speed with which applications are released by breaking them down into small, self-contained services that can be delivered independently.

The microservice design allows huge, sophisticated applications to be delivered quickly, often, and reliably. It also enables a company's technology stack to adapt.

These elements are the backbone of any reliable microservice architecture and must be considered when creating a microservice-based design. These characteristics speak to the microservice's independent and isolated nature, critical for its implementation.

What are the design patterns of microservices?

Microservices design patterns are known to tackle a variety of problems.  As a result, in this blog on Microservices Design Patterns, We'll go through the most important patterns for building a successful Microservices architecture, and we'll go over each one in-depth.

As shown in the diagram above, an aggregator is a composite capability that combines numerous microservices. It might be a UI that requires functionality from three microservices, or it could be a bundled service with some business logic API. Because the aggregator microservice is based on the DRY principle, we may abstract logic in composite microservices and aggregate that reason in a single microservice.

Advantages of the aggregator design pattern

The following are some of the advantages of employing the aggregator design pattern:

Disadvantages of the aggregator design pattern

The following are some disadvantages of employing the aggregator design pattern:

The UI links to various Microservices in Microservice Architecture. If the Microservices are finely grained, the Client may need to connect to many Microservices, which can be noisy and complex. The services, as well as their APIs, can also change. Large businesses will welcome other cross-cutting concerns (SSL termination, authentication, authorization, throttling, logging, etc.).

One solution to these problems is to use API Gateway. It can serve as a reverse proxy, routing client requests to the appropriate Backend Microservice. It can also fan out a client request to numerous Microservices and return the aggregated replies to the client. It also helps to address important cross-cutting issues.

The API gateway design pattern is shown in this diagram. Microservices use service discovery to determine the best communication path between them. Microservices connect over a stateless server, such as an HTTP Request/Message Bus.

The front-end and Backend apps are decoupled and independent Services in modern business application development, particularly in Microservice Architecture. The Backends for Frontends paradigm could be utilized in cases where each UI has its backend tailored to it. Other benefits include acting as a Facade for downstream Microservices, which reduces chatty interactions between the UI and downstream Microservices. The BFFs are also utilized to give additional security in a highly secured scenario when downstream Microservices are placed in a DMZ network.

Advantages of the BFF Pattern

Disadvantages of the BFF pattern

The CQRS design pattern can be beneficial to run a complicated query that covers many service databases because data access is confined to a single database. The program will be broken into two sections in this pattern: command and query. All requests for Create, Update will be handled by the command portion, whereas the query section will take materialized views. This implies the command component will be in charge of creating, updating, and deleting statements, while the query part will be in the order of the reading statements. The diagram below should assist you in comprehending the CQRS design pattern.

The event sourcing is in charge of generating a new, sequential sequence of events. The application state can be recreated by querying the data, but we must reimage every change to the program's condition to do so. The principle behind event sourcing is that the system should catch any change in the state of an entity.
A business item's persistence is achieved by storing a succession of state-changing events. Every time an object's state changes, a new event is added to the sequence of events. Because it's a single operation, it's virtually atomic. The current state of an entity can be reconstructed by replaying its occurrences. 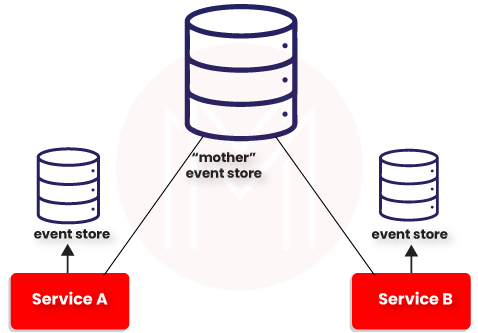 The Circuit Breaker pattern interrupts any working activity by stopping the request and response process if the service is not working. When it comes to service-oriented notions like Microservices, this is critical. The caller requests a microservice without knowing whether or not the service endpoint is active. It continuously retries the call if no response is obtained. When a customer calls many microservices, or there is a workflow involving multiple microservices, and one of them fails to answer, the problem becomes even worse.
A circuit breaker pattern is used to avoid such instances, in which the client calls a proxy instead of a service directly. As a circuit barrier, the representative will act. When the number of failures reaches a certain level, the circuit breaker trips for a certain amount of time.

Every business application has a plethora of infrastructure configuration settings. In addition, in an enterprise setting, the program is typically deployed in multiple runtimes (Local, Dev, Prod). It poses a significant security concern because production credentials are easily compromised. Furthermore, any change in a configuration parameter necessitates a rebuild of the Application.
This is very important in Microservice Architecture because there could be hundreds of services. Externalizing all Configurations is a superior strategy. As a result, the build process and the runtime environment are separated. It also reduces security risks by only using the Production configuration file at runtime or via environment variables.

The disadvantage of Externalized Configuration

The Strangler design closely resembles a vine that strangles the tree wrapped around. When a regular migration from a traditional application system to modern architecture is undertaken, the system requires extensive code rewrite processes. In such circumstances, the Strangler pattern can assist in gradually deprecating a legacy system and gently introducing new functionality rather than taking the entire system offline and doing a comprehensive overhaul. This means that two independent apps (Original and refactored) will coexist in the exact location. The refactored application will wrap around or strangle the original application until the actual application is shut down.

As a result, this blog on Microservices Design Patterns comes to an end. We hope you've learned a lot about Microservices design patterns and how they are effective in Microservices' specialized design requirements.