Microservices is a new age architectural trend in software development used to create and deploy large, complex applications. Today's top tech players like Amazon, Uber, Netflix, Spotify, and more have also made the transition. It’s always essential for tech professionals to stay ahead of the market by mastering in-demand technologies and Microservices is the one you need to master. This Microservices tutorial will help you get acquainted with everything you need to know to get started with Microservices.

Monolithic is something composed of a single piece. According to layman terms, Monolithic architecture is similar to a big container that clubs all application components together into a single package.

Let's see an example of this Monolithic Architecture to understand how the applications are built on this framework, how they perform, and how they communicate.

Refer to the client-server model shown below

When a user opens a web User Interface, just view a website. But, behind the scenes, the server-side application has different features which handle it all together.

Features like handling HTTP requests, executing domain-specific logic, and retrieving data from the database are built on a single framework. So if any of the components won't work, the entire system goes down. Also, if any of the features get updated, the whole system needs to rebuild. These were the significant challenges for developers working on monolithic architecture.

Also, there are several other challenges with Monolithic Architecture. Let's look at them one by one now:

All these challenges were the main reasons that led to the evolution of Microservices. So now let's understand What is Microservices in simple words?

Microservices architecture or simply Microservices - is an architectural style that structures a single application into a collection of services that are independently deployable, loosely coupled, organized around business capabilities, and are easily maintainable and testable. Each service runs its own process and often communicates with each other over messaging or HTTP using lightweight protocols.

The trend for microservices is increasing in recent years as it enables rapid and reliable delivery of large, complex applications (one of the most critical skills for Java developers). Microservices can be thought of as the next form of Service Oriented Architecture (SOA).

Refer to the below diagram to understand how the Microservices architecture provides better scalability, how different components can be worked together, and how each component can be handled individually without impacting the entire application. 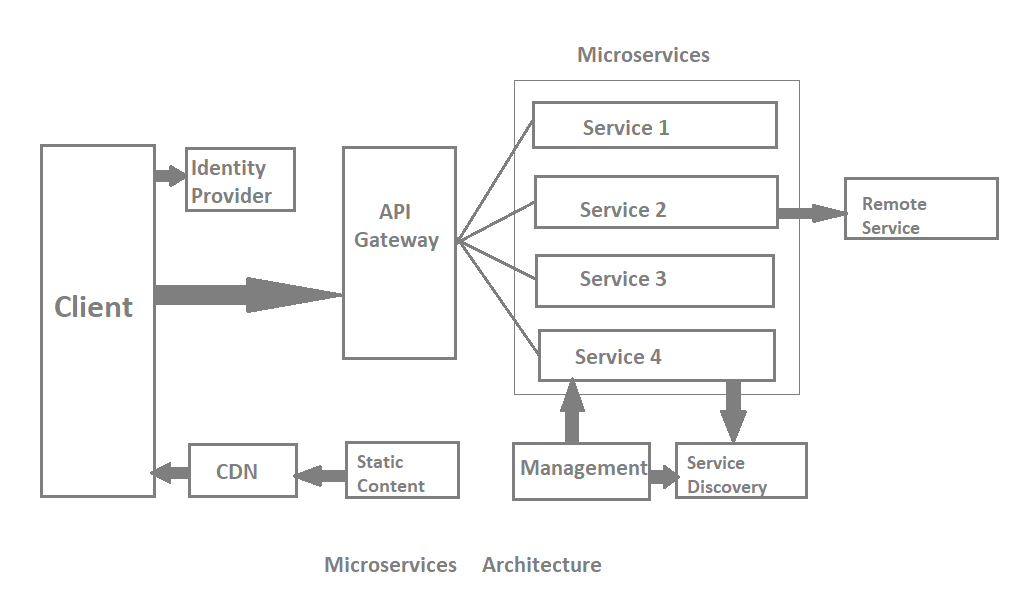 A microservices architecture consists of small, autonomous services, and each one is self-contained and implements a single business capability. All these services have their execution environments and load balancers to perform different functionalities and capture their data. They communicate with each other through the HTTP REST/Message bus for performing automation and monitoring capabilities. API gateway acts as a communicator to pass the request of the client to the internal architecture.

Let's understand the functionalities of these components one by one:

Let's look at an example of an eCommerce application built with Microservices Architecture. 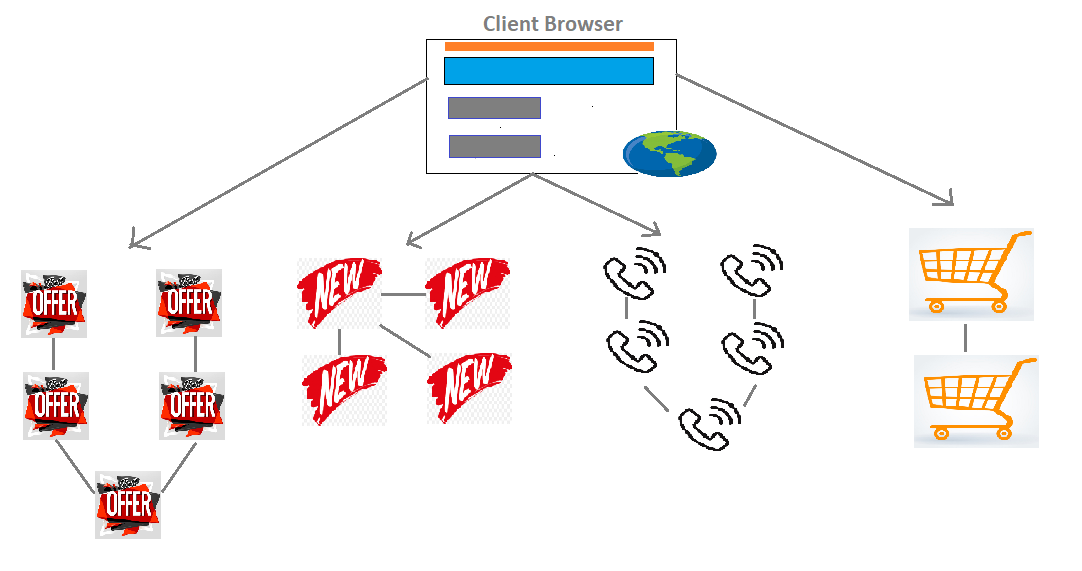 In the Monolithic Architecture, all the components merge into a single module. But, in Microservices Architecture, they spread out into individual modules(microservice).

Here, each feature (Offer, New, Cart, Customer services, and so on) is allotted with a different microservice, managing their data, and performing other functionalities. Every microservice focuses on a single business capability. Through that, we can deploy individual features whenever required again and again without affecting the performance of the entire application.

These individual deployable units communicate with each other through a well-defined interface called REST or message bus.

By now, you might have understood what the functionalities of microservices were and how they communicate. Let’s discuss the solid principles of Microservices.

The key principles of Microservices are:

Now, you know the principles under which microservices are designed. Let’s see the major differences between both Microservices and Monolithic architectures.

The below diagram illustrates both Microservices and Monolithic architecture patterns.

Following table details the differences between both architectures:

Microservices are of two types:

Stateless microservices are the building blocks of a distributed system. They don’t maintain a session state between requests. If any service is removed, it won't affect the overall performance logic for the service.

Compared to stateless microservices, stateful microservices are less preferred in real life. They maintain session information in the code. And when more than two services interact with each other, they keep a service request state.

This is about the types of microservices. Since every architectural pattern has its pros and cons, now it's essential to know Microservice's advantages and disadvantages before adopting it.

The advantages of Microservices are strong enough to have convinced some big players like Netflix, eBay, etc., to adopt the methodology. Let’s discuss them one by one:

Since the services are separate, you can easily scale the needed ones at the required times instead of the complete application.

With added simplicity, developers can easily understand the functionality of a service.

There are a few disadvantages to Microservices. Some of them are listed below:

There are several microservices frameworks that you can use for developing Java. Some of the most popular are listed below:

Spring Boot is the leading framework to build microservices applications in Java. It works on top of languages for Inversion of Control, Aspect-Oriented Programming, and others. Spring Boot is a mature, open-source, feature-rich framework with excellent documentation and a vast community. Spring boot projects include IO platform, Cloud, Framework, Security, Batch, Data, REST Docs, and so on.

Dropwizard is a Popular open-source framework used for the rapid development of RESTful web services. This framework integrates the mature and stable Java libraries into a fully functional platform: Jersey for REST, Jetty for HTTP, and Jackson for JSON, FreeMarker, Mustache, and more.

We can set up Dropwizard using Maven by adding the latest version to the POM.

In addition, it boasts high performance and operations friendliness for microservices application development. Similar to Spring Boot, Dropwizard apps are packed into JAR files with the Jetty application server embedded.

Jersey is an open-source framework used to develop RESTful web services in Java that support JAX-RS APIs implementations. The best thing about Jersey is it has exceptional documentation with examples.

It's a Java Microservices framework used for building microservices architecture in line with Domain-Driven Design (DDD) principles. It also allows you to implement microservices patterns such as Event-Driven Architecture and Command-Query-Responsibility-Segregation (CQRS).

By now, you became familiar with frequently used Java microservices frameworks. Next, let us move forward and learn about the various tools utilized while developing applications on Microservices architecture.

Following are the popular microservices tools used for various functionalities:

An open-source tool that allows building and deploying apps using containers. Developers can run an application as a single package using these containers.

This AWS Lamda tool supports infrastructure-less servers for microservices builds and users charged on the pay-per-use rate. Mostly, we use this tool for hosting REST or API services in combination with the AWS API gateway.

Prometheus is a monitoring tool used to detect the strange patterns of Microservices.

Logstash is an open-source tool used for checking the logs. It allows you to stash, centralize, and transform data of microservices.

This tool employs patterns to interact between microservices and also scales the application simultaneously. With this tool's help, you can connect microservices to solve problems of distributed systems.

By now, you should have understood how shifting to microservices benefits development, operations, and deployment.

Here are the best practices for designing microservices architecture:

This brings us to the end of this article, where we have learned what microservices are and how they benefit your enterprise architecture, best practices, etc. We hope you are clear with all that has been shared with you in this Microservices tutorial to get started.

We hope you found the article informative and useful. In case you have any doubt, please drop the query in the comment box.