Below mentioned are the Top Frequently asked Apache Mahout Interview Questions and Answers that will help you to prepare for the Apache Mahout interview. Let's have a look at them.

1. What is Apache Mahout?

Apache™ Mahout is a library of scalable machine-learning algorithms, implemented on top of Apache Hadoop® and using the MapReduce paradigm. Machine learning is a discipline of artificial intelligence focused on enabling machines to learn without being explicitly programmed, and it is commonly used to improve future performance based on previous outcomes.
Once big data is stored on the Hadoop Distributed File System (HDFS), Mahout provides the data science tools to automatically find meaningful patterns in those big data sets. The Apache Mahout project aims to make it faster and easier to turn big data into big information.

2. What does Apache Mahout do?

3. What is the History of Apache Mahout? When did it start?

The Mahout project was started by several people involved in the Apache Lucene (open source search) community with an active interest in machine learning and a desire for robust, well-documented, scalable implementations of common machine-learning algorithms for clustering and categorization. The community was initially driven by Ng et al.’s paper “Map-Reduce for Machine Learning on Multicore” (see Resources) but has since evolved to cover much broader machine-learning approaches. Mahout also aims to:

4. What are the features of Apache Mahout?

Although relatively young in open source terms, Mahout already has a large amount of functionality, especially in relation to clustering and CF. Mahout’s primary features are:

5. How is it different from doing machine learning in R or SAS?

Unless you are highly proficient in Java, the coding itself is a big overhead. There’s no way around it, if you don’t know it already you are going to need to learn Java and it’s not a language that flows! For R users who are used to seeing their thoughts realized immediately the endless declaration and initialization of objects is going to seem like a drag. For that reason, I would recommend sticking with R for any kind of data exploration or prototyping and switching to Mahout as you get closer to production.

Below is a current list of machine learning algorithms exposed by Mahout.

7. What is the Roadmap for Apache Mahout version 1.0?

The next major version, Mahout 1.0, will contain major changes to the underlying architecture of Mahout, including:

Scala: In addition to Java, Mahout users will be able to write jobs using the Scala programming language. Scala makes programming math-intensive applications much easier as compared to Java, so developers will be much more effective.

Spark & h2o: Mahout 0.9 and below relied on MapReduce as an execution engine. With Mahout 1.0, users can choose to run jobs either on Spark or h2o, resulting in a significant performance increase.

8. What is the difference between Apache Mahout and Apache Spark’s MLlib?

The main difference will come from underlying frameworks. In the case of Mahout, it is Hadoop MapReduce and in the case of MLib, it is Spark. To be more specific – from the difference in per job overhead
If Your ML algorithm mapped to the single MR job – the main difference will be only startup overhead, which is dozens of seconds for Hadoop MR, and let say 1 second for Spark. So in the case of model training, it is not that important.
Things will be different if your algorithm is mapped to many jobs. In this case, we will have the same difference in overhead per iteration and it can be game changer.
Let’s assume that we need 100 iterations, each needed 5 seconds of cluster CPU.

At the same time Hadoop MR is a much more mature framework than Spark and if you have a lot of data, and stability is paramount – I would consider Mahout as a serious alternative.

9. Mention some use cases of Apache Mahout?

10. How can we scale Apache Mahout in Cloud?

Mahout to scale effectively isn’t as straightforward as simply adding more nodes to a Hadoop cluster. Factors such as algorithm choice, number of nodes, feature selection, and sparseness of data — as well as the usual suspects of memory, bandwidth, and processor speed — all play a role in determining how effectively Mahout can scale. To motivate the discussion, I’ll work through an example of running some of Mahout’s algorithms on a publicly available data set of mail archives from the Apache Software Foundation (ASF) using Amazon’s EC2 computing infrastructure and Hadoop, where appropriate.
Each of the subsections after the Setup takes a look at some of the key issues in scaling out Mahout and explores the syntax of running the example on EC2.
Setup
The setup for the examples involves two parts: a local setup and an EC2 (cloud) setup. To run the examples, you need:

To get set up locally, run the following on the command line:

This should get all the code you need to be compiled and properly installed. Separately, DOWNLOAD THE SAMPLE DATA, save it in the scaling_mahout/data/sample directory, and unpack it (tar -xf scaling_mahout.tar.gz). For testing purposes, this is a small subset of the data you’ll use on EC2.
To get set up on Amazon, you need an AMAZON WEB SERVICES (AWS) account (noting your secret key, access key, and account ID) and a basic understanding of how Amazon’s EC2 and Elastic Block Store (EBS) services work. Follow the documentation on the Amazon website to obtain the necessary access.

With the prerequisites out of the way, it’s time to launch a cluster. It is probably best to start with a single node and then add nodes as necessary. And do note, of course, that running on EC2 costs money. Therefore, make sure you shut down your nodes when you are done running.
To bootstrap a cluster for use with the examples in the article, follow these steps:

Fill in your AWS_ACCOUNT_ID,AWS_ACCESS_KEY_ID,AWS_SECRET_ACCESS_KEY,EC2_KEYDIR, KEY_NAME, and PRIVATE_KEY_PATH. See the Mahout Wiki’s “Use an Existing Hadoop AMI” page for more information.

Open hadoop-ec2-init-remote.sh in an editor and:

Note: If you want to run classification, you need to use a larger instance and more memory. I used double X-Large instances and 12GB of heap.

./hadoop-ec2 launch-cluster mahout-clustering X
X is the number of nodes you wish to launch (for example, 2 or 10). I suggest starting with a small value and then adding nodes as your comfort level grows. This will help control your costs.

Create an EBS volume for the ASF Public Data Set (Snapshot: snap–17f7f476) and attach it to your master node instance (this is the instance in the mahout-clustering-master security group) on /dev/sdh. (See Resources for links to detailed instructions in the EC2 online documentation.)

If using the EC2 command line APIs, you can do:

4. Execute the shell script to update your system, install Git and Mahout, and clean up some of the archives to make it easier to run:

11. What motivated you to work on Apache Mahout? How do you compare Mahout with Spark and H2O?

Well, some good friends asked me to answer some questions. From there it was a downhill slope. First, a few questions to be answered. Then some code to be reviewed. Then a few implementations. Suddenly I was a committer and was strongly committed to the project.
With respect to Spark and H2O, it is difficult to make direct comparisons. The mahout was many years ahead of these other systems and thus had to commit early on too much more primitive forms of scalable computing in order to succeed. That commitment has lately changed and the new generation of Mahout code supports both Spark and H2O as computational back-ends for modern work. 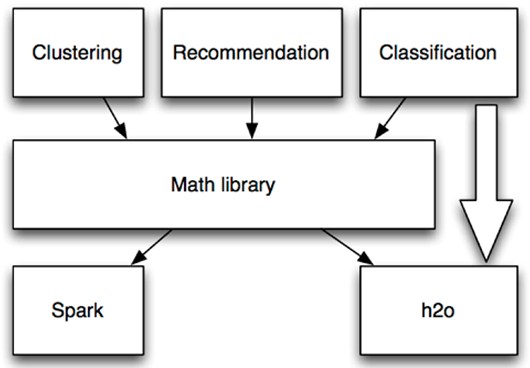 That inter-relationship makes the direct comparison even harder in some ways. I think that there is so much to work on in machine learning that it is hard to say that one project is directly competitive with another when, in fact, they actually work together in many ways.
Clearly, Mahout has a huge lead over the other systems in the way that it compiles linear algebra expressions into efficient programs for back-ends like Spark (or H2O). Clearly also, H2O has a huge lead over Spark’s MLLib in terms of numerical performance and sophisticated learning algorithms. Mahout is also the only system that fully supports indicator-based recommendation systems, which is a huge difference as well.

12. Is “talent crunch” a real problem in Big Data? What has been your personal experience around it?

Yes. The talent-crunch is a real problem. But finding really good people is always hard.
People over-rate specific qualifications. Some of the best programmers and data scientists I have known did not have specific training as programmers or data scientists. Jacques Nadeau leads the MapR effort to contribute to Apache Drill, for instance, and he has a degree in philosophy, not computing. One of the better data scientists I know has a degree in literature. These are widely curious people who are voracious learners. Combine that with a good sense of mathematical reasoning and a person can go quite far.
Limiting your hiring to people who have a CS degree from a top-10 university and 5-10 years experience in exactly what you want them to do makes it very hard to hire good people and very much limits how much in the way of new ideas they can bring to you.
A great example of this same bias happens when people ask questions in interviews to which they already know the answer. I don’t want to hire people who know what I know. I want to hire people who know what I don’t know. If I learn something important from a candidate during an interview, that is one of the best indications that they are a good hire. If they learn from me, I don’t consider that a great indicator.