Hacking generally refers to technical effort for manipulating the behavior of the network connections and connected systems. At first, the hacking took place in the 1960s with MIT students coming up with some findings in the computing process.
In this Ethical Hacking Tutorial, we are going to explore the below-mentioned topics related to Ethical Hacking:

What is Ethical Hacking?

Hacking is carried out to gain access to the computer system or related computer network with the loopholes existing & read all the private data or sensitive data existing in it! Hacking a system to find the loopholes or weaknesses of the system or network used for computers with legal permissions is called “Ethical Hacking”.

Is Ethical Hacking a Cybercrime?

Ethical hacking cannot be considered a cybercrime unless the hacker disobeys the rules & does not follow the code of ethics agreement. Typically, hacking refers to gaining computer/network access without the permission of the concerned person or organization and leads to an unlawful review of data, theft & file destruction. The entire process violates both federal & state laws. At the federal level, the FBI investigates the hacker, and, at the state level, we have different law enforcement for investigating the hacker. The precise crime depends on the individual who commits the crime, based on

Cybercrime is defined as a crime wherein a computer system is used as a tool for committing the offense. Cybercrime includes accessing your personal information, confidential data, or disable your device. Below mentioned are a few category-based cybercrimes.

The legal issues include the personal or confidential information of the firm or organization being revealed by the hacker to the competitor or outsider. In such cases, legal actions will be taken on the hacker, if proven guilty.

An ethical hacker can negatively affect a firm by committing errors at the organizational level. During this scenario, the company can sue the ethical hacker. He/she can be at legal risk if not properly taken care of or protected.

We have different types of Ethical Hackers. A few of them are discussed below:

These hackers are also called ethical hackers as they perform penetration testing at the organization level & identify the bugs in security. They work on various methods to ensure protection from black hat hackers & few malicious cybercrimes.

These hackers take a negative persona of hacking. They are the culprits. The agenda of a black hat hacker is money all over time. They look for loopholes in the network and systems. Using these loopholes, they can access the data and post viruses or worms in your systems.

These hackers are a thin line between the Black hat and White hat Hackers as they do not work for their personal profit. They hack into organizations and find vulnerabilities and a leak over the internet or intimate the same to the firm owners. Let me explain this. A grey hat hacker may not use his hacking expertise for personal profit and can not be defined as a black hat hacker. Whereas he can not hack organizations' data as he is not authorized as an ethical hacker.

They are hackers who don’t have any coding skills. They usually use tools or predefined codes by developers and hackers. Their intention is to impress others or friends. They do not bother about the nature of the attack and use off-the-shelves' code for hacking. They are often involved mostly in DDoS and DoS attacks.

These hackers are very curious to learn. We consider themselves script kiddies, as the thin line which separates them is the desire of learning. These newbies have a full desire to become full-brown hackers. You can identify them within hacking communities as they engross fellow members of the community. We can easily identify one of those by their zeal to learn the latest hacking trades.

These hackers' aim is to take revenge on people who make them angry. These are to be considered as script kiddies and their intention will be taking revenge with no desire to learn hacking by using simple attacks like IP overload with packets, which leads to (Disk Operating System) attacks. Blue hat hacker is considered as a script kiddie, who has a revenge nature.

These are a group of hackers with an intention to make social changes, and they believe it strongly. They often hack govt organizations to prove that they exist and share their intentions and thoughts.

These hackers are mostly called telecommunication hackers. They are very active in cloning the phone, network mimicry, blue hacking, and other forms of cellular hacks.

The below steps explain the different stages of hacking. 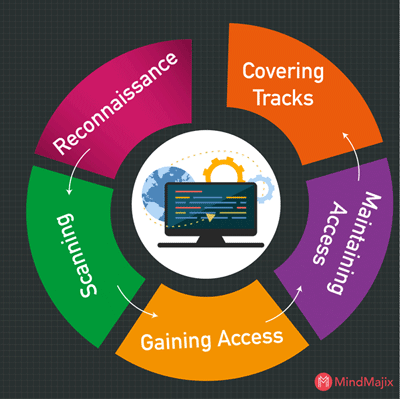 Stage 1 - Reconnaissance: It is the act of gathering information related to intelligence and preliminary data of your target to plan for an attack in a better way. It can be carried out either actively or passively(Network, IP address, DNS records). Hacker will be spending most of his time in this stage.

Stage 2 - Scanning: It is a prior stage of launching the attack. At this stage, we scan for open ports, services, etc. The tools collectively used by the hacker during the scanning would be port scanners, sweepers, dialers, and vulnerability scanners.

Stage 4 - Maintain Access: At this stage, the hacker will be in stealth mode to avoid getting caught while working in the host environment. Once the hacker gains access, he lays the path for future attacks and exploitations by making the target hardened. Hacker also secures the path by any other bypass accessing with rootkits, backdoors, and trojans.

In the cyber world, security-focused OS is the hackers’ best friend as it leads them to detect weaknesses in the systems or networks. The basic tool for hacking a system for the hacker is the OS. Usually, the specializations in hacking are dependent on the Linux Kernel and are regarded as advanced working systems. Below compiled are a few top platforms for Ethical Hacking.

Leave an Inquiry to learn Ethical Hacking Training in Hyderabad

As an Ethical Hacker, one needs to know about the various hacking techniques:

What Language Should an Ethical Hacker Learn?

It depends on the target system and platforms. Few programs are used to develop only specific platforms.

Below mentioned are a few languages that are useful for hackers:

What is Encryption Hacking?

Encryption helps in accessing unauthorized data with emails, bank details, etc, as keeping secure communication between the two parties involved. This can be done via “Scrambling” the data sent from one to another person as lengthy code by making it unreadable to whoever tries to access it.

In the data encryption, the receiver and the sender parties only can Decrypt the data scrambled into readable content. This can be achieved by “Keys”, which provides access to make the data  Readable and Unreadable.

How To Break Encryptions?

Today, criminals and hackers find new ways to “Cracking” encrypted documents by finding loops in encrypted algorithms. That is how they can find out the necessary key used for reading the information in plain text.

There are other ways in earlier days where they simply test with all the possible keys provided. But, nowadays, it is performed by computers that are capable of calculating billions of keys/second, and this method is called “Brute Force.”

How To Bypass Encryption?

In encryption, we use complicated mathematical equations for hiding the information. In general, encrypted files require a key to decrypt the data or information. But, in a few cases, a hacker can bypass the encryption for stealing the data. In a few ways, we can encounter these techniques. The ways are stated below.

The perfect way to bypass encryption is to steal the key simply. If a hacker can insert a keylogger into our system, he will read all the necessary activities by recording. The best way to protect ourselves by updating anti-malware programs regularly.

A hacker can hash common passwords and look for matches in DB. The algorithms that convert these passwords are easier to identify. For preventing these types of attacks, we need to use complex passwords that are not available in the dictionary.

Hashing is commonly used by DB-servers and is a cryptographic method. It is a straight cryptographic algorithm that provides a unique string for each input. For example, when creating an account and password, the server stores a hash version of the data, and when logging in, it hashes the stored data and checks whether both of them are the same or not for validation.

In a few cases, cryptographic security is also capable of securing brute force violations. Brute force violation needs to try every possible way to break into the encrypted scheme and this takes a lot of time for succeeding. Probably, in many customer forms, encryptions use 128/256-bit keys.

Few of the below-mentioned tools are effective and some of them are free of cost. These tools help in finding the loopholes of the software or computer systems or networks. Few of these are open-source as well.

Pros and Cons Of Ethical Hacking

Hackers use different types of techniques. The familiar ones are mentioned below.

Top Ethical Hacking Techniques, What Are They?

Are you looking to get trained on Ethical Hacking, we have the right course designed according to your needs. Our expert trainers help you gain the essential knowledge required for the latest industry needs. Join our Ethical Hacking Certification Training program from your nearest city.

These courses are equipped with Live Instructor-Led Training, Industry Use cases, and hands-on live projects. Additionally, you get access to Free Mock Interviews, Job, and Certification Assistance by Certified Ethical hacker Trainers