J2EE Tutorial, J2EE is a highly popular and preferable platform that implements Java programming language. It is known for its security feature, reliability, and portability on cross-platforms.

J2EE extends the overall capability of Java to Enterprise Edition. As a standalone Java environment, J2EE is used by both system and software developers to build and deploy a website or web-based application. J2EE makes use of the core Java computer programming language as it offers numerous benefits.

J2EE is entirely reliable; it provides optimum security, cross-platform support, and is easy to implement. Developers keep on upgrading the J2EE to match up with the trending and technological needs.

Since its development, the Java programming language is one of the best languages for computer programming to develop web-based applications.

The best part of this enterprise application module is that it can run on numerous servers seamlessly.

Additionally, the J2EE enterprise can provide enterprise-related support suggesting that it can run curated applications in EJB.

J2EE also ensures that web applications run side-by-side of a server application. The J2EE tutorial covers everything that a budding developer has to understand before entering the realm of Java and J2EE.

The J2EE platform utilizes a multilayered application model distributed comprehensively. The fundamental of the application is further divided into several components as per their functions

The J2EE application uses numerous features installed on distinctive machines relying on the multilayered ecosystem of J2EE. It is the J2EE ecosystem where the application components fit in.

J2EE applications are divided into the following list of tier components: 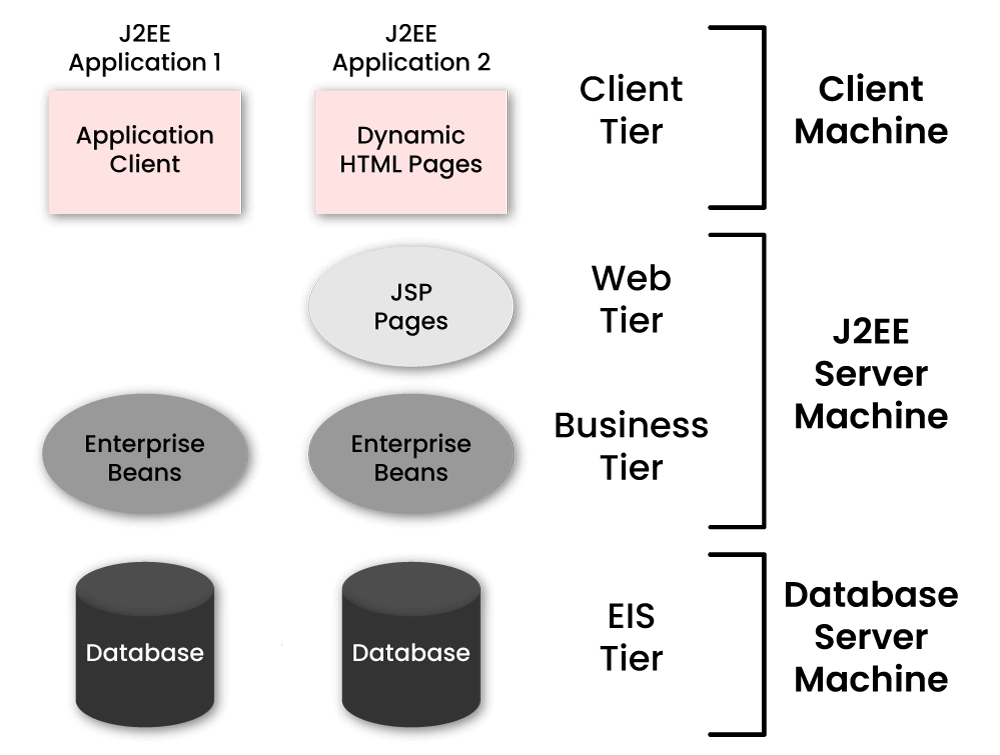 The three-tiered applications, which often run to extend the conventional server model and two-tiered client, play an essential role. It places the multithreaded application server directly between the back-end storage and the client application.

The components in J2EE make up the applications. The element in J2EE is a self-contained, fully functional software unit that is assembled right into the J2EE application based on related files and classes.

As mentioned earlier, J2EE components are in Java programming language, and at the same time, they are compiled similarly to any computer language program.

Additionally, there is a subtle yet distinctive difference between standard Java classes and J2EE components. The difference is that all the J2EE components are put together and assembled into J2EE applications, verified to be perfectly formed, and have consent with J2EE specification. Further, it is deployed to take care of production.

They are then run as well as managed by using the J2EE server.

A J2EE client can either be an application client or a web client.

These markup languages are generated by the web components, which run in the Web tier and a web browser. By the looks of it, this also renders all the pages that are already received from the J2EE server.

In J2EE, web clients are also regarded as thin clients that aren’t in charge of executing business rules, query databases or connect with legacy applications.

At the time of using thin clients, certain heavyweight operations such as off-loading to the enterprise beans to execute on J2EE server for leveraging on speed, security, reliability, and services of server-side technologies of J2EE.

These are the web pages that are received from J2EE’s web tier; they come with embedded applets. Moreover, the applet is a compact client application that is written using Java programming.

It executes the Java virtual machine that is installed in the Web browser. Client systems will most likely require Java Plug-in alongside a security policy file for the applet to execute a web browser successfully.

Web components are some of the preferred API needed to create web client programs as it doesn’t rely on security policy files or plug-ins which are usually required on client systems.

Personnel who are deeply invested in designing a web page do not need to understand the syntax of the Java programming language to get the job done.

Application client on the J2EE platform runs on the client machine. Further, it provides a way for users to oversee and handle the tasks which need a strong and powerful User Interface.

With the help of markup language, the UI can make it up to the application client. Application clients also possess GUI, which is essentially made from Abstract Window Toolkit APIs or Swing.

However, it does open a possibility to include a command-line interface.

J2EE application clients also have direct access to the enterprise beans that run in the business tier. Nevertheless, if there is an astute requirement of a warrant, the J2EE application client opens up an HTTP connection for establishing communication alongside a servlet that runs in the web-tier components.

Servlets are smaller Java programs that essentially run within a web server.

JavaBeans were introduced at an early stage as an integral part of building GUIs. The curators followed a traditional pattern that gave them the prominence of curating a dedicated panel to edit the bean’s attributes seamlessly.

Generally, bean properties are the ones that represent an overall control of the screen, such as height, width, even the size of the text.

At first, programmers did consider JavaBeans as a rugged data structure. Over the years, users began to rely on JavaBeans components to manage the flow of data right between an applet, an application, and components that run on a J2EE server.

At times, the JavaBeans also run between a database and server components. For instance, according to the overall specification of J2EE, JavaBeans components are not cut or taken into consideration as J2EE components.

The figure below represents several elements that make up J2EE’s client tier. Clients often communicate in a to-and-fro motion with a business tier that runs on the J2EE server. The communication could sometimes be direct or indirect. There are also cases where clients can run a browser by bypassing servlets or JSP pages that run in the web tier. 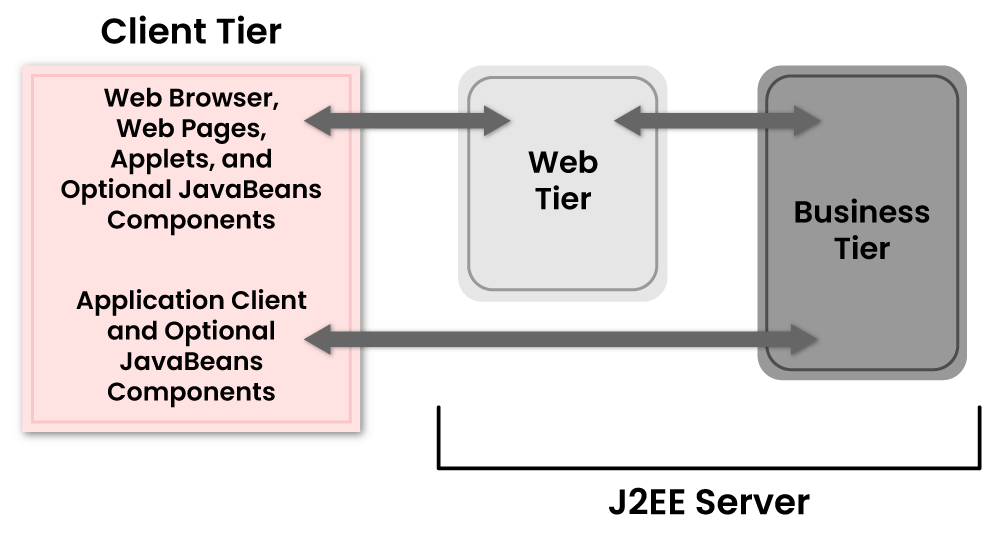 A J2EE client can either be an application client or a thin web client. The tough choice is while deciding which one they should use as it leads to trade-offs between two factors:

When you off-load the server's necessary functionality, the distribution gets more straightforward, much seamless while deploying and governing the application.

Providing a great deal of functionality to clients ultimately results in a better assessment of the user experience.

Web components in J2EE could either be JSP pages or servlets. The Servlets are the programming language classes in Java that process both construct and request responses.

On the other hand, JSP pages are text-based documents that execute servlets by allowing quite a natural approach for creating steady and stable content.

Applets and static HTML pages are often found to be combined with the Web components at the time of application assembly.

However, just like JavaBeans, they are J2EE specifications do not consider them as web components either. J2EE server-side classes are often amalgamated directly with HTML pages and web components that aren't web components.

Like the client tier, the web tier will also include JavaBeans components for overseeing user input that directs input towards the enterprise beans, which runs to process the business tier.

They are more like logic that addresses or solves any business domain like retail, banking, finance. Business components are overseen by enterprise beans which run the business tier.

In figure (i) and (ii) below, readers will get a glimpse of how enterprise beans get data from the client programs; they even have the provenance to process the data if necessary.

Further, the data they receive and the process are sometimes again sent to the enterprise information system tier for storage purposes. 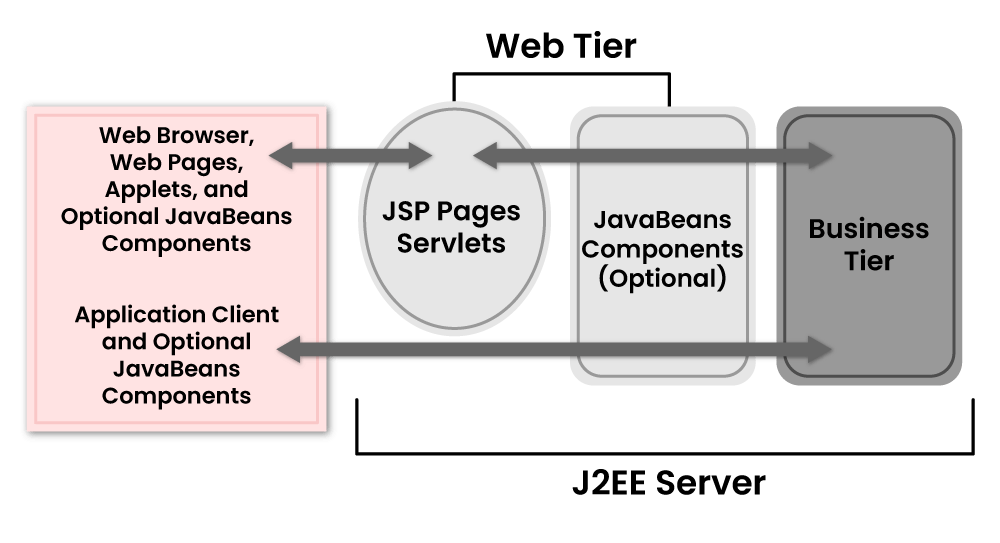 Enterprise beans are of three types, they are:

It is always hard to write a multilayer thin-client application as they incorporate several lines made up of intricate code for state management and handling transactions, multithreading,

Additionally, J2EE server J2EE servers also provide many services in terms of containers for the component type. Moreover, businesses do not have to rely on developers for developing these services; instead, companies could concentrate on solving business problems.

In J2EE, the deployment process installs the application component in the containers as shown in the figure below: 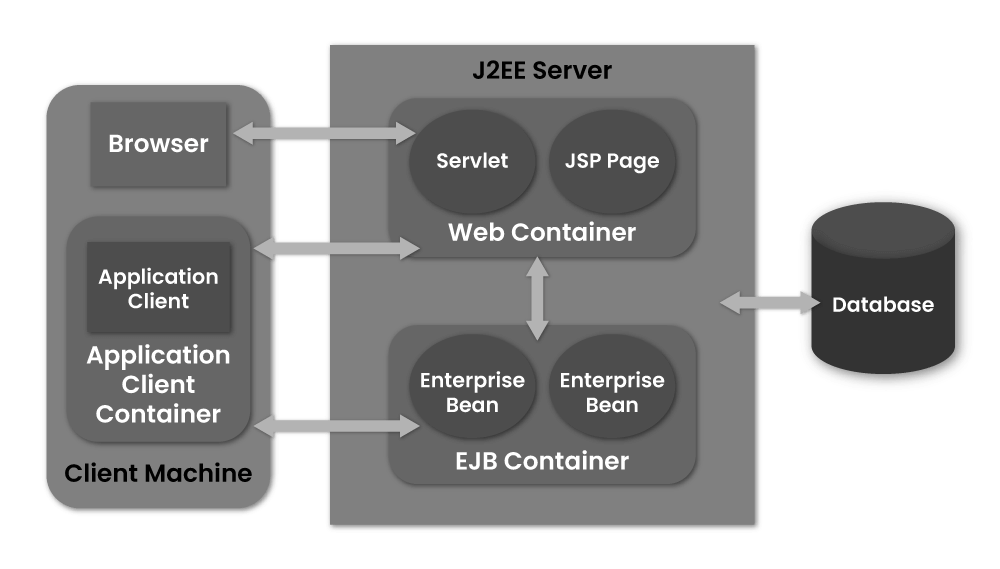 J2EE Server: It is the runtime part of the J2EE product. J2EE is essentially responsible for providing web containers and EJB.

It manages the overall execution of the enterprise beans for all J2EE applications. EJB and its container run on a J2EE server.

It manages the JSP page’s execution alongside servlet components for the J2EE applications. Both web components, as well as their container, runs on a J2EE server.

It is responsible for managing the execution of applets. It comprises Java Plug-in and a web browser that runs clients together.

How J2EE helps businesses with its working model?

J2EE also features a wide array of APIs, which always creates a helpful environment for building an authoritarian enterprise system.

J2EE also comes with a standard edition to build, develop, or deploy any enterprise application that works together by necessary API that is adequately defined and requires services provided by J2EE.

What can you achieve from J2EE?

As a unique platform that uses Java programming language, J2EE empowers developers to curate any web application by using HTML pages or even applets in Java.

The most crucial component technologies of the J2EE platform are the Java Server Pages and Servlet. Both JSP and Servlet are beneficial in enterprise web applications.

The development of J2EE is used to develop an enterprise-level application for websites.

The main agenda that developers have is to push the designing of web applications for running multi-layers applications that are designed in the enterprise model.

There are already several multi-layered application products, such as Weblogic and IBM Websphere, which are made up from the core of J2EE technology.

Some of the essential benefits of using J2EE for your business are:

The architecture of J2EE is still a famous architecture that is available in the present day, and it still cuts out for the tasks today in 2021.

If you’re looking forward to learning everything there is to learn about J2EE; then you’ll be awestruck to know that the approach of the technology is never-ending.

J2EE is a vast technology, and it usually upgrades itself with better and robust results. We sincerely hope this J2EE tutorial helps you in your endeavors to learning J2EE and its applications and components for curating enterprise-level webpages.