Below are some common terms used in BPC along with explanations and context in reference to what each term means or how it applies.

♦ Models: Formally known as Applications in SAP BPC 7.5 NW this is just another word for version of SAP BPC. For example you can have a Model for SAP BPC 10.0 on Microsoft platform and one on NetWeaver platform.

♦ Dimensions – Dimensions are considered part of the master data that is necessary in BPC. You can think of dimensions as different categories of tags associated with certain values (dimension members). Dimensions are only the category of tags that are necessary, the dimension members would be the exact tag to be placed along with the balance. Just as how tags are put in place for a blog post or a product for sale, dimension members are tags to be associated with certain financial balances that exist within the BPC system. Each dimension needs to have at least 1 dimension member (each category of tags , you need to specify at least 1 tag value).
There are standard dimension that come out of the box and you can also create customized dimensions depending on your business needs (most of the time creating a dimension will be necessary to distinguish certain balances from others when you need to report or analyze financial balances).

Diagram of Standard list of dimensions in Environment shell 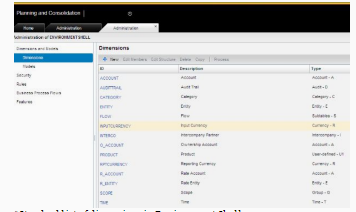 ♦ AuditTrial: Formally known as DataSource in BPC NW 7.5, this dimension is where you specify different cuts/ classifications of data. Remember that information can come from different places. The AuditTrial dimension is where you can segregate different types of information from one another to have transparency on how your total financials are made up.
For example:
Let’s say you have source information from 2 different systems, System A and System B. You want to have transparency on how much of the total came from System A and how much came from System B. In the AuditTrial dimension you can designate the different systems by establishing 2 different dimension members.

[ Related Article:- What is BPC used for ]

Although the category dimension is normally used to distinguish what the data is used for, this dimension can be up for interpretation. This dimension is just another category of tags, so you can define whatever dimension members or tags as you wish . You can define numbers or dates as the tags to determine the version or you can put in anything else to segregate your data.

♦ Entity: This dimension is used to define the different companies associated with the Environment that is maintained /built. The dimension members in this dimension should represent the associated companies (or entities) that are needed for the process you are building, whether it is consolidations or anything else.
Note: An entity does not specifically have to be a real life company. Many times the entity dimension can be made up of entities that do not exist legally. This is because as long as you have a trial balance associated with an entity BPC does not care that it does not exist legally. This is done sometimes when the subsidiaries are too small and more than 1 is combined together to form a “entity” which just means that someone combined multiple trial balances into 1 to make things easier.

♦ Flow: This dimension is used to define the different types of activity one should expect in a financial cycle. Flow is also known as movement type. The flow is really only pertaining to any balance sheet accounts such as assets, liabilities, and equity. The flow is meant to track all of the movements for each account. The reason why we need it is due to reporting requirements where either regulators or internal management need to track movements of certain accounts (i.e. cash movements in a given period).

♦ Product: This dimension is normally used to define different product line. This dimension’s use is very similar to that of the dimension Category, where products can be up for interpretation. You can use this dimension to tag your balances on what product line it is associated with or product number etc. The product line can be a specific product or even a more general category of a product. The amount of detail should be determined by what reporting needs are required.

The input currencies will correlate to the different exchange rates that you need to completed as reference data so BPC can perform the currency conversion process.
Note: This dimension is not really used as a tag for the balances but more used as a tag for the entities in the entity dimension as well as a reference to what exchange rates needs to be input. It provides what currencies can be used to tag each entity and will determine what exchange rate the entity must use when performing currency translation.

♦ RptCurrency: This dimension is used to define which currency or currencies are used as the reporting currency. Normally this dimension has the following dimension members

♦ O_Account: This dimension is used to define the different attributes needed for the ownership structures. This dimension much like the inputCurrency dimension and is not used to tag balances but more to provide as a reference to how ownership is setup in the BPC system.

♦ R_Entity: This dimension is very similar to the category dimension. However, it is used for the exchange rates only. It can used to tag exchange rates in multiple rates in multiple ways. Usually this dimension should only be used when there are complex currency translation requirements when looking at different scenarios, planning or forecasting with different exchange rates.
♦ Scope:  Previously known as “Groups” in BPC7.5 NW, this dimension is used to define consolidation units. A consolidation unit is a group of entities that needs to be combined and produce consolidated financial statements. The scope is where you define what groups of entities should be considered a consolidation unit. A company can have a simple entity structure and have just 1 consolidation unit defined or it can have a very complex structure where multiple consolidation units needs to be defined.
♦ Time: This dimension is used to define the different time periods that are needed. Time dimension are normally set up as either monthly or quarterly. However, the time dimension can also have certain flexibility. You do not necessary have to have 12 months per year or 4 quarters per year. If you have a need you can setup the time dimension to have as many periods as you need.
♦ BW: BW stands for SAP Business Warehouse and sometimes interchangeable with BI or Business Intelligence. BW is the processing layer of BPC. Think about it like this, BPC is the store front but BW is the warehouse. BPC is where the customer would perform the transactions but BW is where those transactions are processed and completed.

Diagram of List of BW objects found for Environment shell 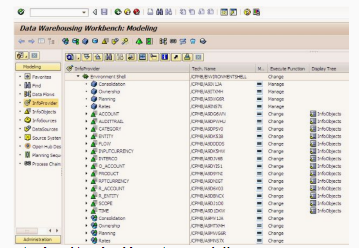 ♦ Performer: Previously known as “owner” in SAP BPC 7.5 NW, the performer is just a user who is assigned either a security role and / or to specific tasks. The performer is setup in the security section of the BPC.

♦ Web Reports/Input Forms:  Previously known as “Live Reports” these are web interfaced reports and/ or input forms a user can access to perform reporting, inputting data, or analyzing their current data.

♦ Ownership Manager: The ownership manager is a new feature in SAP BPC 10.0 where a business user can adjust how entities are rolled up and how each company should be consolidated with what percentage of ownership.

♦ Logic Script: Logic Script is referring to a specific way of sequencing and programming calculations in SAP BPC 10.0. LogicScripts are used when someone is building a process that should be executed in SAP BPC. The LogicScript works off of MDX language.

♦ EPM Report Editor: EPM Report Editor is a reporting function that can be found in the Microsoft Office Add-In. the report editor is used to setup report and to perform analysis on the balances in the BPC system. 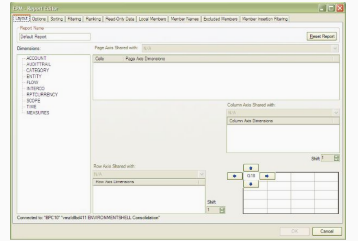