You can use the TRANSPORTABLE TABLESPACES feature to copy a set of tablespaces from one oracle database to another.

The tablespaces being transported can be either dictionary managed or locally managed. Starting with oracle9i, the transported tablespaces are not required to be of the same block size as the target database standard block size.

Moving data using transportable tablespaces is much faster than performing either an export/import or unload/load of the same data. This is because the datafiles containing all of the actual data are just copied to the destination location, and you use an export/import utility to transfer only the metadata of the tablespace objects to the new database.

The transportable tablespaces feature supports both data pump and the original import and export utilities, imp and exp, with one caveat: you must use imp and exp for tablespaces containing xmltypes.

The transportable tablespace feature is useful in a number of scenarios, including:

There are two ways to transport a tablespace:

To run the transport tablespaces wizard:

1. Log in to enterprise manager with a user that has the exp_full_database
2. Click the maintenance link to go to the maintenance tab.
3. Under the heading move database files, click transport tablespaces.

About transporting tablespaces across platforms:

Starting with oracle database 10g, you can transport tablespaces across platforms. This functionality can be used to:

If the source platform and the target platform are of different endianness, then an additional step must be done on either the source or target platform to convert the tablespace being transported to the target format. If they are of the same endianness, then no conversion is necessary and tablespaces can be transported as if they were on the same platform.

Before a tablespace can be transported to a different platform, the datafile header must identify the platform to which it belongs. In an oracle database with compatibility set to 10.0.0 or later, you can accomplish this by making the datafile read/write at least once.

Limitations on transportable tablespace use:

Be aware of the following limitations as you plan to transport tablespaces:

The following query returns a list of tablespaces that contain xmltypes:

Transporting tablespaces with xmltypes has the following limitations:

Additional limitations include the following:

You cannot transport the system tablespace or objects owned by the user sys. Some examples of such objects are pl/sql, java classes, callouts, views, synonyms, users, privileges, dimensions, directories, and sequences.

Types whose interpretation is application-specific and opaque to the database (such as raw, bfile, and the anytypes) can be transported, but they are not converted as part of the cross-platform transport operation. Their actual structure is known only to the application, so the application must address any endianness issues after these types are moved to the new platform. Types and objects that use these opaque types, either directly or indirectly, are also subject to this limitation.

Binary_float and binary_double types are transportable using data pump but not the original export utility, exp. 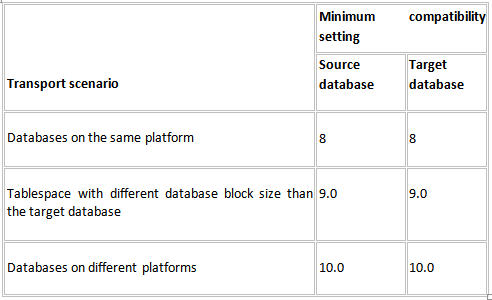