Qlik NPrinting utilizes well-known compact arrangements like PDF and Microsoft Office, so it can facilitate the process of imparting reports to anybody. Qlik NPrinting gives you a chance to make reports from your Qlik Sense applications and QlikView records and lets you disseminate them automatically in a variety of standard organizations.

Qlik NPrinting is an ultimate coming-generation reporting and distribution answer for QlikView and Qlik Sense. It lets you create reports using QlikView documents and Qlik sense apps. Qlik NPrinting has a web interface that is responsive for administrative tasks and for end-users. It is playing a major role in the success of the organization by spreading knowledge and information across the organization and much more.

Users can explore information and then generate reports to communicate and share insights. 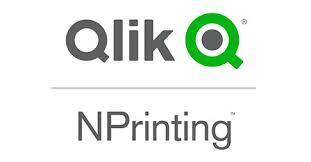 Its on-demand plugin for QlikView allows the generation of reports using various office templates. Its centralized distribution and a self-service subscription center allow you to get the right reports, that too is received by the right people in the way they need them. Qlik NPrinting is intended to support your whole organization with role-based security and multi-engine scalability.

You can finally leave your old BI systems. With Qlik NPrinting, Qlik can become your complete solution exclusively for interactive analytics and reporting.

The main feature that makes Nprinting 17 totally different from NPrinting 16 is that it shifts towards a web-based architecture. Also, report creation, scheduling, and distribution can all be done via any web browser.

NPrinting 16 depends completely on the locally positioned client architecture where content and reports are originated on the NPrinting server.

Qlik NPrinting produces reports that depend on layouts made by you, or dependent on QlikView and Qlik Sense elements. You can deliver reports on scheduled occasions or when individual clients ask them. The last reports are static documents that contain duplicates of the first QlikView and Qlik Sense information as it was at the time the report was created.

Qlik NPrinting can disseminate the remaining burden over numerous multi-strung motors to guarantee high accessibility and prompt execution. As all meta-information is saved in a database framework, it makes it so simple to oversee reinforcements and enable numerous designers to work simultaneously.

There are two types of Qlik Tools. They are: 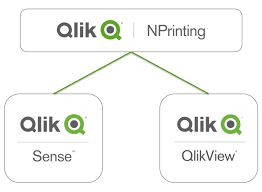 Qlik Sense - It has a responsive design allowing users to develop visualizations and reports that are optimized for either mobile viewing or desktop.

Deployment simplifies the interface and new functionalities for administrators and users. The aspects under it are as follows.

The designer interface is a local client. It is a desktop application that enables developers to make and manage report templates.

The Qlik NPrinting Designer is Windows-based programming that is introduced only on the computers of developers who need to author format-based reports. The designer is used to make and alter formats. You can launch it only from the Qlik NPrinting web interface.

This Qlik NPrinting Server is the principal node in a reporting system.

It coordinates multiple reporting engines situated on different nodes to spread the workload and to create an environment of high availability.

In a Qlik NPrinting site, only a single NP Server is required, which consists of the Scheduler, Web engine, Repository, and Messaging Service.

Repository: The storehouse manages the stamina of Qlik NPrinting entities by saving the entities to a database.

Web Engine: The web engine takes care of user authentication and authorization depending on the user roles.

The Qlik NPrinting Engine makes reports on the basis of the data sent by the scheduler.  A minimum of one motor should definitely be installed. You can introduce extra motors on different PCs to expand the remaining task limit and the accessibility of your reporting system.

It is conceivable to introduce numerous motors on various PCs to distribute the outstanding task.

With Qlik NPrinting's web interface, you can arrange, oversee, and screen your reporting framework simply and conveniently. You can manage engines, check their status, manage users and security jobs, make and schedule new reports, interface with QlikView records, and do numerous other activities.

Qlik NPrinting’s web interface lets you arrange, monitor, and manage the reporting system in the simplest way. While administering the entire reporting system, below are some examples of what one can do: 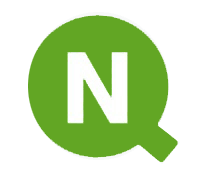 New features of Qlik NPrintng have been innovated. Below stated are some of them.

Two new parameters in the Qlik NPrinting Designer have been included:

NPrinting 17 has been proved as a very important tool. It has given so many benefits other than collaborative analytics for the enterprise and great-looking reports. The NPRINTING 17 traits are explained below.

Many customers knew that traditional QlikView was lacking reporting capabilities. Earlier NPrinting 16 barely could send usable reports to some information recipients. It was awkward to use and it had hardly changed since QlikView 9. New NPrinting changed everything. NPrinting is the most forward report generation, distribution, and scheduling application for QlikView.

Features that are not available will be launched soon in the near future.