Software testing is a mechanism of assessing and checking whether a software application or product does what it is intended to do. As software testing is becoming more popular among organizations, automation has become a prerequisite. TestComplete is a powerful automated testing tool released by SmartBear, which tests different application types including Web, Android, iOS, Windows, HTML5, and more.

Leading MNCs like McAfee, CISCO, J.P.MORGAN, THOMSON REUTERS, etc., use TestComplete for testing their Desktop and Web applications. Thus, by learning TestComplete, you can build a promising career in the Automation Testing field.  If you want to learn TestComplete, Join our TestComplete Training.

In this TestComplete tutorial for beginners, you will learn What is TestComplete and how to test different web and mobile applications through TestComplete. Before we start, let us have a look at what we will be discussing in this article:

TestComplete is the testing tool designed by SmartBear for automating desktop, mobile, and web applications. Through this tool, we can generate, handle, and execute the tests. The supported scripting languages are VBScript, Python, JScript, C++, and DelphiScript.

In TestComplete, we have the option for playback and record test creation. We record the manual testing process, and we can playback and handle it as automated testing, unit testing, keyword testing, and regression testing.

TestComplete is a user-friendly tool, and it enables software testing teams of all skills to quickly build and run automated test cases for mobile, desktop, and web applications. It allows us to accelerate testing cycles, enhance software quality, and assure our applications function as designed.

Following are the primary reasons for using TestComplete:

What are the Capabilities of this tool?

Following are some of the capabilities of TestComplete:

In TestComplete 14.0, we can generate platform web tests. We use them for checking how our website performs or a web application on the platforms and in browsers and devices that TestComplete does not directly support.

Following are the Limitations of TestComplete:

Advantages and Disadvantages of TestComplete

Step3: Define the folder path where you have to install the software. 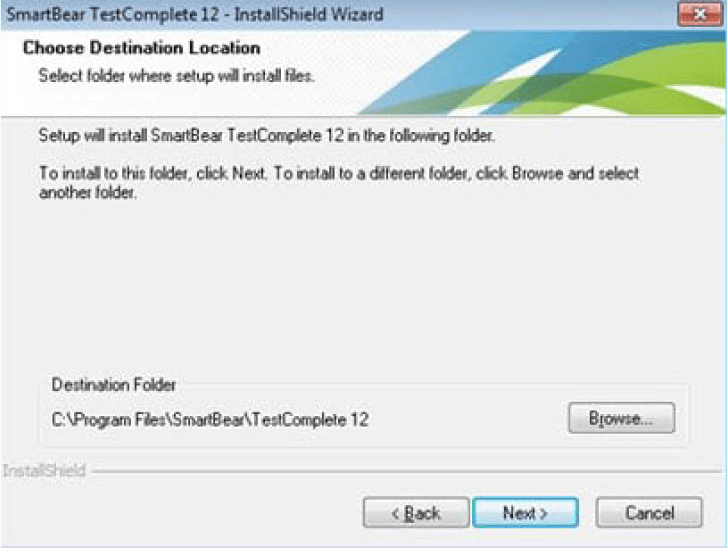 Step4: After that, activate the license by pressing the 30-day trial license. 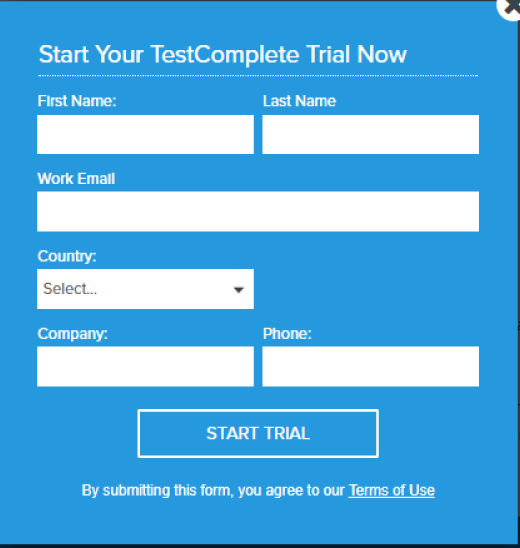 Step5: After restarting the computer, we completed the TestComplete installation. 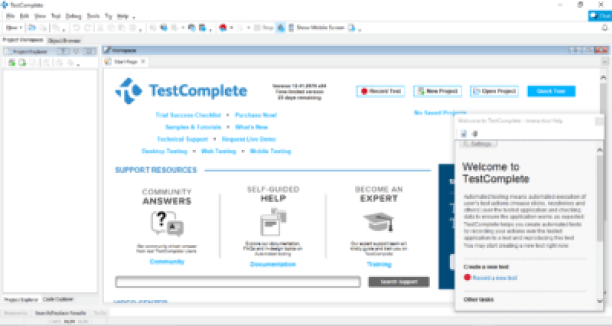 Creating the first project on TestComplete 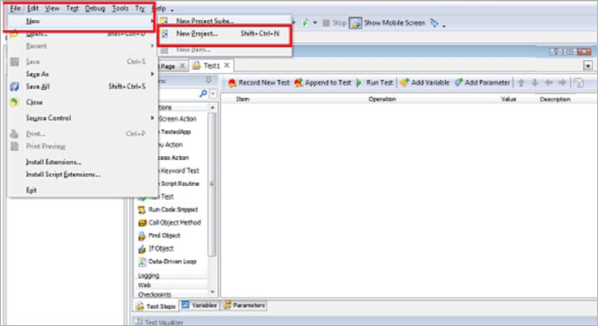 Step4: On the other hand, we will utilize the shortcut key(shift + Ctrl + N) for creating the new project.

Step5: Windows will emerge; provide the name of the project. 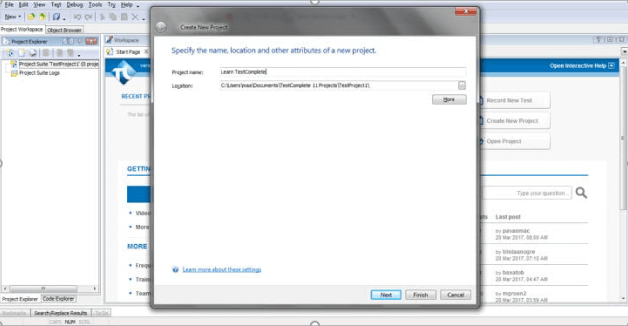 Step7: Finally, we have created the First Project on TestComplete.

Creating the test cases for the web application

Select “browser” and “web option” and provide the URL of the application. Allow “Cross-platform web testing” if we have to record the tests in different browsers or in the remote environment, which TestComplete does not support.

Follow these steps for creating the test cases for a web application: 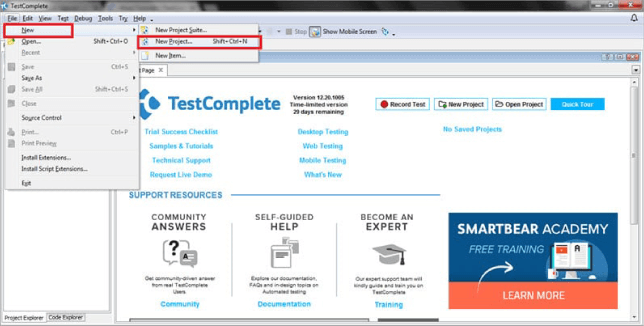 Step2: Enter the Project Name; we can change the location if needed. 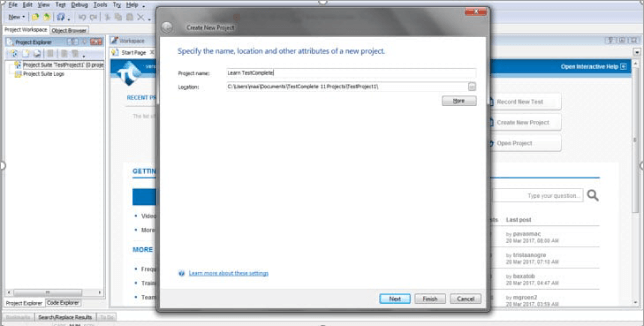 Step3: Press the “Next” button. 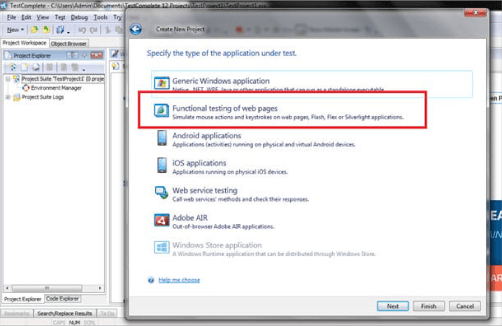 Step5: After selecting the platform, we will enable or disable test visualizer functionality. Press “Next.” 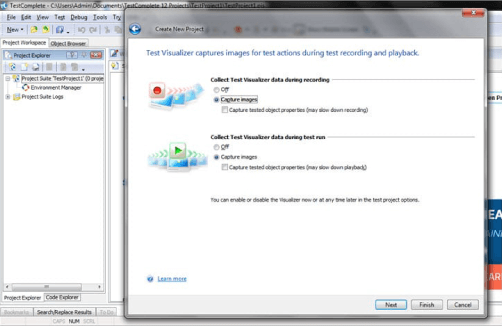 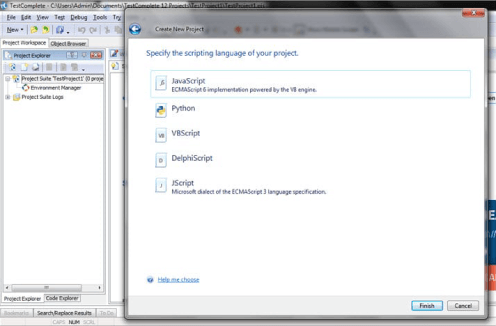 First, open the “TestComplete” IDE. The test cases generated previously will be displayed in the project explorer. Right-click on the script and press “run.” The test starts executing, and we can also fetch options for stopping and pausing. We will use the pause option to debug the tests to undergo logs. We can utilize the stop option for halting the tests before it has ended. If we encounter any errors during the test execution, TestComplete stops the test execution, and we store the related information in the test logs. From the “TestComplete” IDE, we can:

Step2: If required, set up the project run order on the test items page of the project suite.

Step1: Right-click the required test in “Project Explorer” and choose “Run” from the context menu. 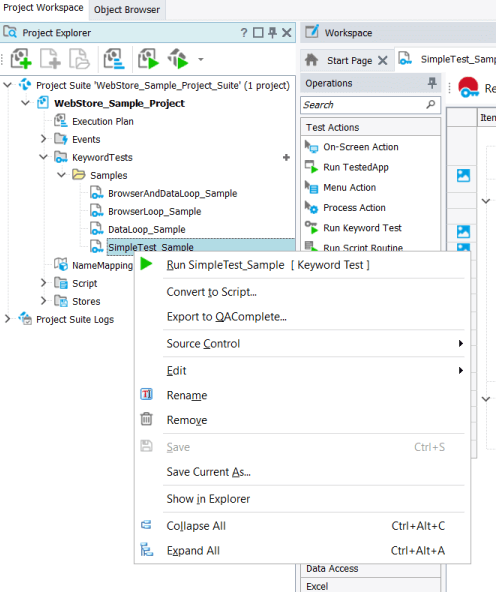 Step2: Open the test case in the “Keyword Test Editor,” and after that, press “Run” in the editors’ toolbar.

Step1:Right-click the required script unit in Project Explorer and Choose “Run/Run RoutineName” from the context menu. 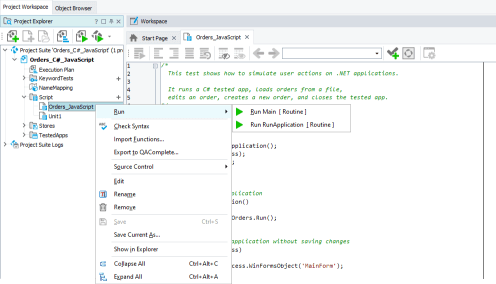 Step2: In “Code Editor,” put the insertion point in the routine code, and after that, press “Run This Routine” in the toolbar of the “Code Editor.”

While executing the script or Keyword test, the testing engine automatically terminates the breakpoints. The engine emphasizes the operations or lines where we ended it and triggers the step-by-step execution mode. We can create conditional breakpoints for stopping the execution only if particular conditions are satisfied. In some cases, it can be handier for activating the debugger from keyword or script test. For doing this, we can utilize the Pause test execution in posting the error option or “Runner. Pause” Method.

The pause test execution on posting the error option available in the “Engines - General Option” window. If we enable this option, TestComplete activates the debugger whenever the error message is posted to the test log.

The “Runner” object includes the “Pause” method that stops test case execution.  For calling the method from the keyword test, we can use the “Run Code Snippet” or “Call Object Method Operations.” If we call the method from the script, the execution terminates on the line that we can execute after line storing the instruction of the method call.

Our test cases must be concrete, built in an easy way, which covers the maximum test coverage. If we carry out data-driven testing, we must provide the needed test data in the test storage, like covering all the test scenarios.

Traceability Matrix is a column and row relationship where rows have the columns, and test cases have the needed test scenarios. At the intersection point, we can complete which test case covers which requirement. Through the traceability matrix approach, we can identify which test case is getting uncovered and duplicated at all.

While developing the test scripts, we must ensure that they are not wordy, there is no dead code, and satisfy the agreed coding standards. A test script developer must be cautious while working with the testing data loops to ensure that the loop end condition is adequately satisfied.

The application under test must find out how TestComplete interacts with it. For an open or white-box app, a tester can use the fields, methods, and properties. For the black-box application, we create image-based tests. We can save the images in the image repository. Selecting the correct procedure for testing our application can result in the exact script and accurate test results.

It is always best to record the test scripts before using the programming for enhancing them. In this way, we will get the skeleton code to work on and not code everything from the beginning. This reduces a lot of coding time.

How to analyze the tests

In the testing process, we store all the operations as logs. We can identify the log file in project explorer in “Project Suite Logs/SmartStore Log.” Every test run will create a code, and the node icon depicts the message type, i.e., warning, error, success, etc. Therefore, we can identify the testing history for the project in SmartStore Log. After completing the test case execution, the equivalent log will be opened automatically.

The log node consists of actions carried out along with the time when it has been carried out, description, and may also include images. The picture panel displays the projected screen that was grabbed while recording the test cases and the actual screengrabbed in the testing process by using “View Comparison Results” for comparing both images of the screen.

Run Tested App is the command we use for launching our application. As we perform our tests on the “notepad.exe,” the notepad displays the name in “Operating Column.” TestComplete records the operation when we launch the application.

We have entered the software testing help in the displayed window of the notepad; therefore, we use the edit command for setting the text in the application.

If you have any queries, let us know by commenting in the below section.