Android has tremendous growth across the globe with a diverse community. It's open to everyone: designers, developers, and device makers. But do you know how it works? In this Android tutorial, you’ll learn about Android fundamentals like architecture, features, versions, installation, and more.

Android is a leading mobile operating system worldwide, having a global market share of over 71%, leaving the competitors like Apple’s iOS, windows, etc., far way behind. It runs on a wide variety of platforms, and its powerful features contribute to its success.

This Android tutorial/Android Studio tutorial covers basic to advanced-level Android concepts and is developed for both beginners and experienced.

Open Handset Alliance developed Android and was later commercially led by Google. Android is based on the Java programming language, and if you possess knowledge of it, it’s easy to learn Android application development.

Android was released on 23 September 2008, and Android 11 is the latest version.

In 2005, Google acquired Android. Since then, it has been a subsidiary of Google Incorporation.

The codenames of Android ranges from A to P currently. API Level is an integer that distinguishes the framework API revision offered by a version of the Android platform. The following table shows the sequence of Android versions, along with their codenames and supported API levels.

The Features of the Android operating system are listed below:

The best thing about Android is that anyone can set up an Android environment on any operating system.

Another exciting thing is that all the tools used for developing applications are freely available and downloaded from the web.

Before you get started with your Android application programming, make sure you installed the following software’s: 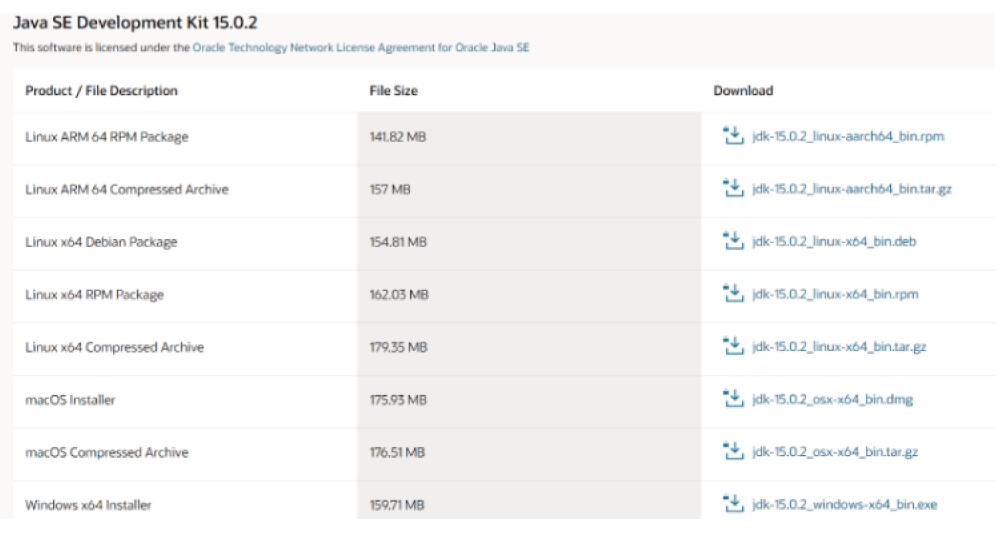 An android operating system is a software stack of different layers, in which each layer groups several programs together. Each layer in the architecture provides various services to the layer just above it.

The below diagram shows the major components of the Android platform. 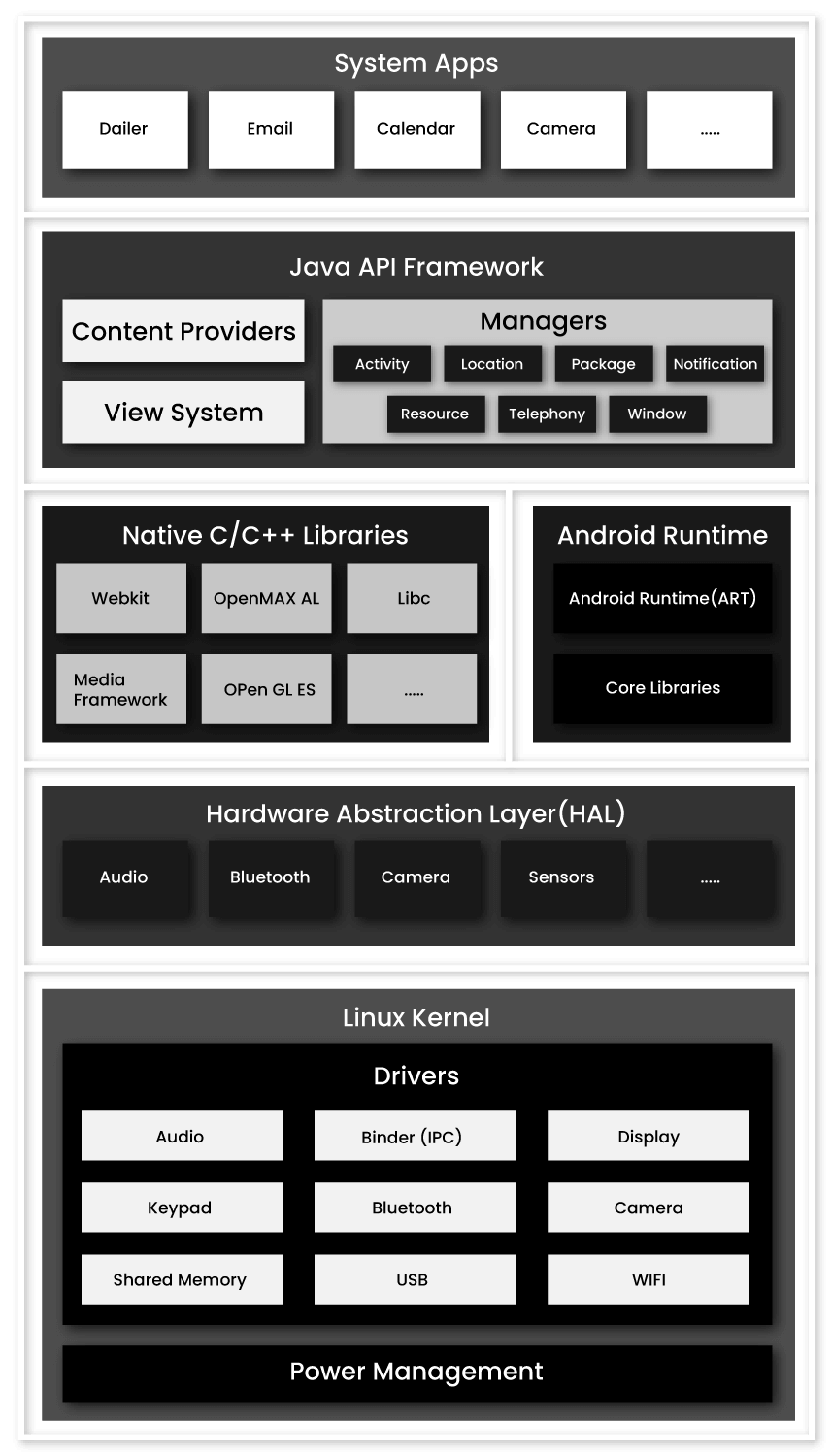 Following are the different layers in the Android software stack:

The foundation of the Android platform is a Linux Kernel. Its importance stems from the fact that it supports the underlying functionalities of Android Runtime (ART), security settings, memory management programs, shared libraries, other hardware drivers, and more. With the evolution of Android, the Linux Kernels it runs on have evolved too.

This layer provides standard interfaces that exhibit device hardware competencies to the higher-level Java API framework. HAL consists of different library modules, each of which applies an interface to the hardware component’s particular types.

Another layer in the architecture is Android’s Native Libraries. A library passes a set of instructions to the device for handling different data types.

The entire feature-set of Android OS is available through APIs written in Java programming language. They form the core building blocks of Android application development. Essential blocks of application framework are:

System apps are at the topmost layer of the Android stack. They function both as applications for users and provide critical capabilities that developers can access from their app.

An Android component is simply a piece of code that has a well-defined life cycle. The core building blocks or fundamental components of an Android application are

An activity is a class that is represented as a single screen and considered as an entry point to users. Usually, an app contains many screens, and each screen extends the Activity() class.

An app can have different activities, and each one is independent of one others. For example, a Grammarly start page where you enter your email and password to log in acts as an activity.

To implement an activity, extend the activity class  in your subclass as follows: 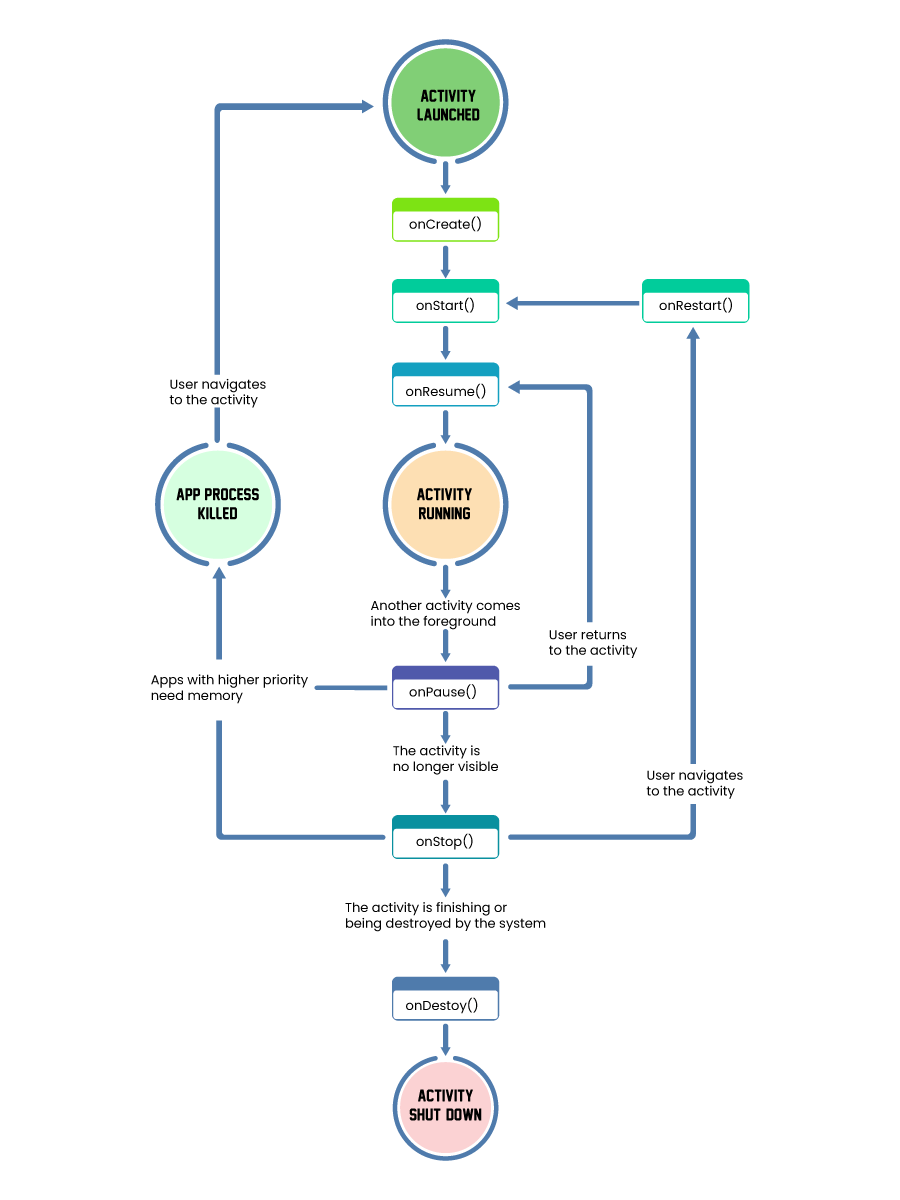 An Android activity can have four states: Running, Paused, Resumed, and Stoped during its entire life cycle.

To describe each activity in each of its four states, Android supports callback methods.  There is a sequence of callback methods that starts up an activity and break down into different methods, as shown in the diagram above:

A service is a component used to perform long-time running operations in the background. It keeps updating activities, data sources, broadcasts intents, and even conducts the tasks when apps are not active.

An example of service is browsing the internet while still listening to music(usage of another app).

Extend service class in a subclass to execute services:

A service can take two states, namely Started and Bound.

A service lifecycle has specific callback methods to monitor changes in the services state. 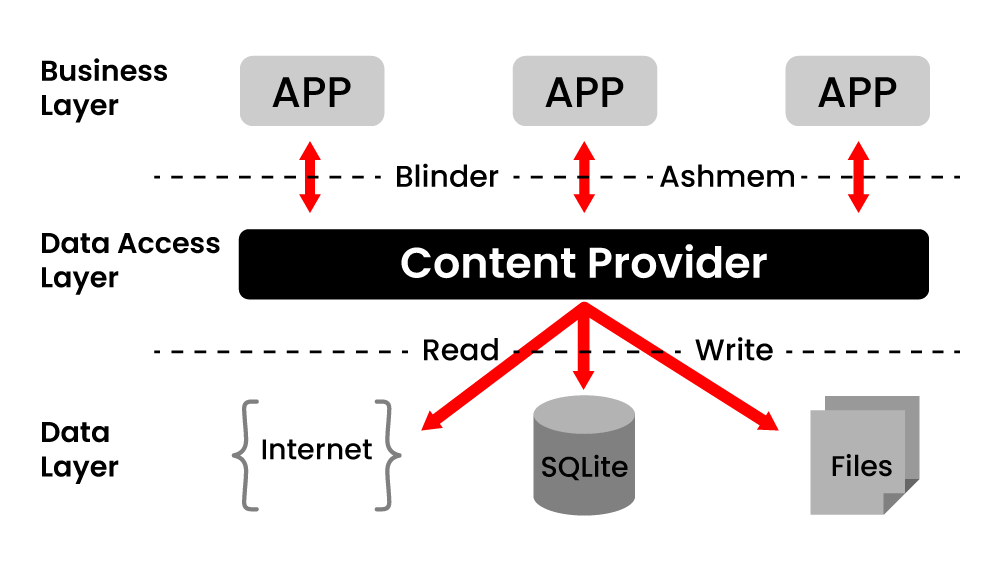 Content Provider is a component that allows data sharing from one application to others on request, and the methods of the ContentResolver class handle those requests. It hides the database information and reads and writes private data of an application that is not shared.

Without content providers accessing data from other applications would become a mess.

Extend ContentProvider in your subclass, to implement this:

Broadcast Receiver is a component that responds to broadcast messages from the same system or another application. These messages are called events or intents. A broadcast receiver is used by the app when they perform execution based on system events. It acts as communication between the Android operating system and applications.

Broadcasts can also be delivered to apps that are not running.

Extend BroadcastReceiver to your receiver, to implement this:

The manifest files describe basic information about your app to the Android build tools and operating system. It performs various tasks such as:

Some additional components of the Android Application:

Android intent is an abstract description of an operation to be performed. It is used to transfer data between activities and start a new service, and display a list of contacts in ListView. For communication between android components, intent works like an inter-application message passing framework. An example of intent is the camera app sends an intent to the system when the user wants to share a picture.

Android widgets are variations of Broadcast receivers and fundamental aspects of home screen customization.  They present data and allow users to implement actions on them. Types of widgets that Android application components support are information widget, collection widget, control widget, and hybrid widget.

The basic building block of  Android is View, which is responsible for event handling and drawing. Some of the views are ImageView Button, ImageButton, EditText, and CheckBox.

Informs the user when the app is inactive or not visible.

A fragment is a piece of an activity that enables a more modular activity design. Users can join more than one fragment in a single activity, and these fragments can be reused in various activities. It generally contains Views and ViewGroups inside them.

It’s the structure of the user interface in the application. Android supports various types of layouts.

With this, we have come to the end of this Android Tutorial. Nowadays, most of them own smartphones and apps where the majority of their time is spent. In fact, billions of Android apps were downloaded every year, assuring that the Android career is a stable one with lots of opportunities.

If you want to develop an Android App, consider getting started with Mindmajix’s Android Certification Training course. The course is aligned with Google’s Associate Android Developer (AAD) Exam and covers everything from scratch.