The Alert Dialog displays the Alert message and provides a yes or no response. It can be used to interrupt the user and inquire about whether he or she wants to continue or stop. This blog covers everything there is to know about Android AlertDialog, including its methods, how to create it with an example, and more.

Dialogs are the most popular and easiest ways of interactions with users. Almost every application contains some dialogs in it. In Android, Dialog is a small window that implies users to decide or enable them to enter particular details. A dialog does not occupy the entire screen and is used for events requiring users to proceed further in the application.

If you would like to Enrich your career with an Android certified professional, then visit Mindmajix - A Global online training platform:  “Android training”  Course.  This course will help you to achieve excellence in this domain.

One of the most popular implementations of Dialog in Android is AlertDialog. It is used to alert the user before performing a particular task. For example, suppose you want to delete some pictures from the Gallery. In that case, the Gallery application will alert you about pressing the delete button, which is the positive button to perform the action in this case, and the image will be deleted permanently.

In this blog, you’ll learn everything about Android AlertDialog, its methods, and how to create it with an example. So, let’s get started.

Following are the topics we will be covering in this article

In Android, AlertDialog prompts a dialog to the user with messages and buttons to perform an action to proceed further in the application. It displays the Alert message to warn users, and according to their response(yes/no), the next step is processed.

Android AlertDIalog is the sub-class of Dialog class.

AlertDialogs in Android can be build using different methods in the activity file.

To create AlertDialog, you need to make an object of AlertDialog.Builder class provides APIs that allow you to work with any kind of content, including a custom layout.

Then you need to set the positive (yes) or negative (no) or neutral button to the AlertDialog box.

After creating and setting the dialog builder, you will create an alert dialog by calling the create() method of the builder class.

This will create the alert dialog and will show it on the screen.

Follow the below steps to create an Android AlertDialog application.

We have defined one-button control in RelativeLayout to display the alert dialog on the Button click in the XML layout file.

For that, open the main activity file MainActivity.java from javacom.Mindmajix.MyApp path and write the code like as shown below.

The output of AlertDialog Example:

When the above code is executed using Android Virtual Device (AVD), you’ll get the result as shown below. 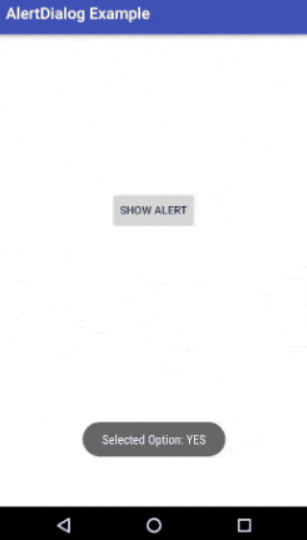 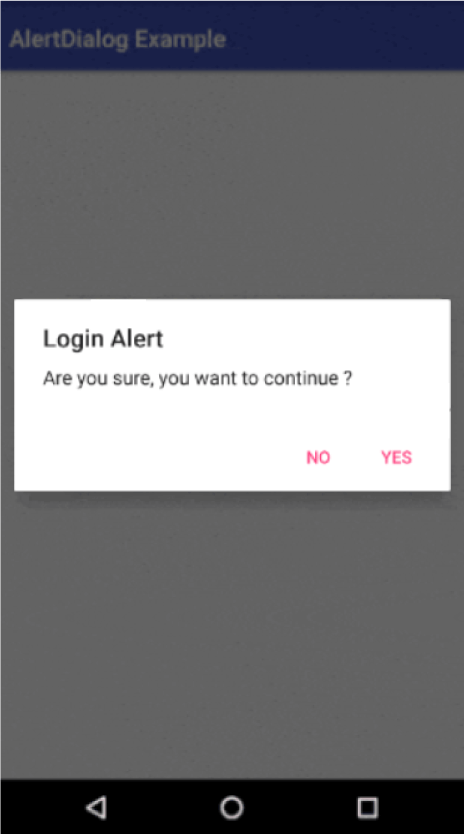 This is how you can use AlertDialog control in Android applications to show AlertDialog based on the requirement.

This brings us to the end of this blog. You’ve learned what Android AlertDialog is and how to create an AlertDialog application. We hope the information shared is informative.