When an activity transitions into and out of the different states, it is notified through various callback methods. All of the callback methods are hooks that you can override to do appropriate work when the state of your activity changes. The following skeleton activity includes each of the fundamental lifecycle methods:

If you would like to Enrich your career with an Android certified professional, then visit Mindmajix - A Global online training platform:“Android training”Course.This course will help you to achieve excellence in this domain.

By implementing these methods, you can monitor three nested loops in the activity lifecycle:

The rectangles represent the callback methods you can implement to perform operations when the activity transitions between states. 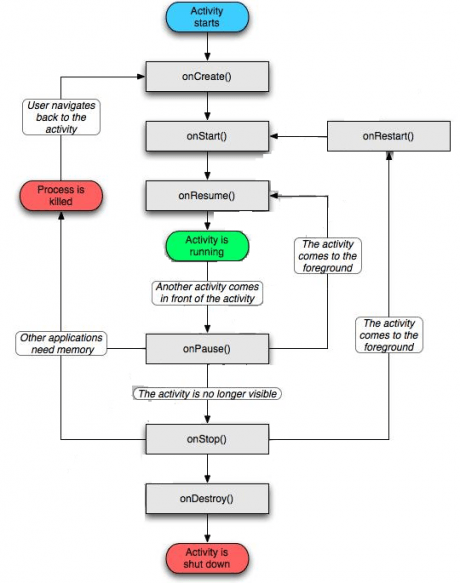 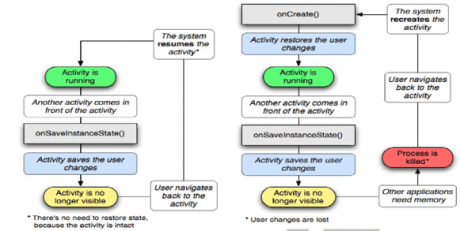 Note: There’s no guarantee that onSaveInstanceState() will be called before your activity is destroyed because there are cases in which it won’t be necessary to save the state (such as when the user leaves your activity using the BACK key, because the user is explicitly closing the activity). If the method is called, it is always called before onStop() and possibly before onPause().
You can also explicitly stop a view in your layout from saving its state by setting the android: save enabled attribute to” false”or by calling the setSaveEnabled() method. Usually, you should not disable this, but you might if you want to restore the state of the activity UI differently.
Because the default implementation of onSaveInstanceState() helps save the state of the UI, if you override the method in order to save additional state information, you should always call the superclass implementation of onSaveInstanceState() before doing any work.

Some device configurations can change during run time (such as screen orientation, keyboard availability, and language). When such a change occurs, Android restarts the running Activity (onDestroy() is called, followed immediately by onCreate()). The restart behavior is designed to help your application adapt to new configurations by automatically reloading your application with alternative resources that you’ve provided. If you design your activity to properly handle this event, it will be more resilient to unexpected events in the activity lifecycle.
The best way to handle a configuration change, such as a change in the screen orientation, is to simply preserve the state of your application using onSaveInstanceState() and onRestoreInstanceState() (or onCreate()).

Coordinating activities
When one activity starts another, they both experience lifecycle transitions. The first activity pauses and stops (though, it won’t stop if it’s still visible in the background), while the other activity is created. In case these activities share data saved to disc or elsewhere, it’s important to understand that the first activity is not completely stopped before the second one is created. Rather, the process of starting the second one overlaps with the process of stopping the first one.
The order of lifecycle callbacks is well defined, particularly when the two activities are in the same process and one is starting the other. Here’s the order of operations that occur when Activity A starts Acivity B:

This predictable sequence of lifecycle callbacks allows you to manage the transition of information from one activity to another. For example, if you have to write to a database when the first activity stops so that the following activity can read it, then you should write to the database during onPause() instead of during onStop().