Today, technology is expanding at a rapid pace, and companies are using a whole set of technologies for product development. This created a huge demand for Full Stack developers as they possess great command over multiple programming languages. According to the U.S. Bureau of Labor Statistics, employment opportunities for Full Stack Developers are estimated to grow from 135,000 to more than 853,000 by 2024.

If you are aspiring for a career in Full Stack Development, well then the future is yours. We at Mindmajix, have curated a list of top Full Stack Interview Questions and Answers that will help you breeze through your interview.

1. What is Full Stack development?

Full Stack development involves developing both the front end and back end of the web application/website at the same time. This process includes three layers:

2. What do Full Stack Web Developers do?

A Full Stack Web Developer is a person who is familiar with developing both client and server software. In addition to mastering CSS and HTML, they are also know how to program browsers, databases, and servers.

To fully comprehend the role of Full Stack developer, you must understand the web development components - front end  and back end

The front end comprises a visible part of the application in which the user interacts, while the back end includes business logic. 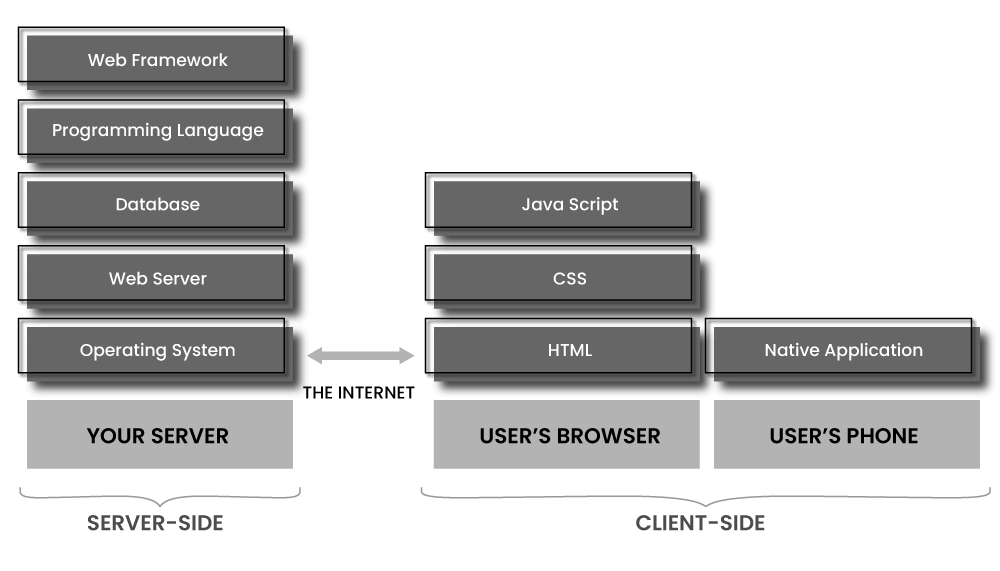 Some of the popular tools used by full-stack developers to make development more accessible and efficient are:

4. What skills do you need to be a full-stack developer?

A Full Stack developer should be familiar with:

As the name suggests, Pair Programming is where two programmers share a single workstation. Formally, one programmer at the keyboard called the "driver" writes the code. The other programmer is the "navigator" who views each line of the code written, spell check, and proofread it. Also, programmers will swap their roles every few minutes and vice-versa.

Cross-origin resource sharing (CORS) is a process that utilizes additional HTTP headers to tell browsers to provide a web application running at one origin. CORS accesses various web resources on different domains. Web scripts can be integrated using CORS when it requests a resource that has an external origin (protocol. Domain, or port) from its own.

7. What is Inversion of Control (IoC)?

Inversion of Control (IoC) is a broad term used by software developers for defining a pattern that is used for decoupling components and layers in the system. It is mostly used in the context of object-oriented programming. Control of objects or portions of a program is transferred to a framework or container with the help of Inversion of Control. It can be achieved using various mechanisms such as service locator pattern, strategy design pattern, factory pattern, and dependency injection.

8. What is Dependency Injection?

Dependency Injection is a design pattern by which IoC is executed. Injecting objects or connecting objects with other objects is done by container instead of by the object themselves. It involves three types of classes.

9. What is Continuous Integration?

10. What is multithreading and how it is used?

The main purpose of multithreading is to provide multiple threads of execution concurrently for maximum utilization of the CPU. It allows multiple threads to exist within the context of a process such that they execute individually but share their process resources.

11. How is GraphQL different from REST?

This is typically a difficult question to answer, but a good developer will be able to go through this with ease. The core difference is GraphQL doesn't deal with dedicated resources. The description of a particular resource is not coupled to the way you retrieve it. Everything referred to as a graph is connected and can be queried to application needs.

Watch this video on “Top 10 Highest Paying IT Jobs in 2021” and know how to get into these job roles.

There are quite a lot of possible ways to optimize your website for the best performance:

13. What is the Observer pattern?

The purpose of the Observer pattern is to define a one-to-many dependency between objects, as when an object changes the state, then all its dependents are notified and updated automatically. The object that watches on the state of another object is called the observer, and the object that is being watched is called the subject.

A Full-Stack engineer is someone with a senior-level role with the experience of a Full-Stack developer, but with project management experience in system administration (configuring and managing computer networks and systems).

Polling is a method by which a client asks the server for new data frequently. Polling can be done in two ways: Long polling and Short Polling.

17. What’s the difference between abstract and interface?

The following table compares the abstract and interface:

18. How can you prevent a bot from scraping a publicly accessible API?

If the data within the API is publicly accessible, then it's not possible to prevent data scraping completely. However, there is an effective solution that will deter most people/bots: rate-limiting (throttling).

Other possible solutions to prevent a bot from scrapping are:

REST stands for representational state transfer. A RESTful API (also known as REST API) is an architectural style for an application programming interface (API or web API) that uses HTTP requests to obtain and manage information. That data can be used to POST, GET, DELETE, and OUT data types, which refers to reading, deleting, creating, and operations concerning services.

20. What is a callback in JavaScript?

A callback in JavaScript is a function passed as an argument into another function, that is then requested inside the outer function to make some kind of action or routine. JavaScript callback functions can be used synchronously and asynchronously. APIs of the node are written in such a way that they all support callbacks.

21. What do you mean by data attributes?

Data Attributes are used to store custom data private to the application or page. They allow us to store extra data on the standard, semantic HTML elements. The stored data can be used in JavaScript’s page to create a more engaging user experience.

22. What's the difference between "resetting" and "normalizing" CSS?

23. What does ACID mean in Database systems?

24. How is rolling deployment different from blue-green deployment?

25. What is an Application server?

An application server is a software framework that allows the creation of both web applications and server environments. It contains a comprehensive service layer model and supports various protocols and application programming interfaces (API).

26. What is referential transparency?

Referential transparency is a term used in functional programming to replace the expression without changing the final result of the program. This means that whether the input used is a reference or an actual value that the reference is pointing to the program's behavior is not changed.

28. What are the types of design patterns?

In general, a design pattern is a repeatable solution for common problems occurring in software design. These patterns show the interactions and relationships between classes and objects.

Mainly, there are three types of design patterns:

30. Name a few ways to optimize a website to be as efficient and scalable as possible?

The following ways are used to optimize the website: