>> Modern computer languages use garbage collection (GC). A GC is a runtime algorithm that scans the allocated objects in our program and de-allocated the objects that we have lost contact.

>> Concave under the I phone doesn’t use GC. So concave applications must use managed memory application running this platform should clean up after use since I phone apps run in a memory con train environment.

If you want to become a IOS Certified Specialist, then visit Mindmajix - A Global online training platform: “IOS Development Training Online”.  This course will help you to achieve excellence in this domain.

This specifies that you are instead in putting an ownership client on the object if the color release the object it doesn’t de-allocated because you retained it. Increases the retain count ‘1’

We call release when we use done using an object we are no longer the owner of the object. So reference count is decreased by owner.

Then the object is automatically deleted and memory is freed otherwise the object states in memory for another owner to use.

This means that you need the object temporarily, and doesn’t make you an owner.

It just like saying I need this object is noun keep it in memory while I do a few things with it then you can delegate it.
Ex:-

This object creates a copy of the objects and you become the owner of the new object.

When we pass the drain for the object it deallocates all the objects in a pool.
Ex:- [pool drain];

In preparing your device to install iPhone apps we have to create decertificates. 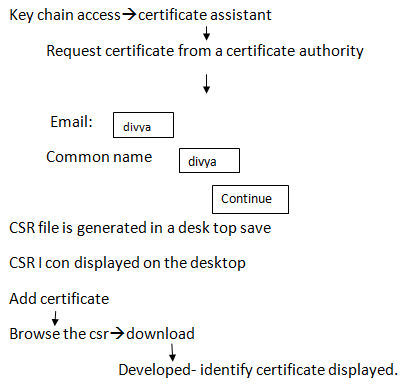 A development certificate identifies an IOS application developer after the CSR is approved we download the developer certificate from the portal and added to the key chain.

It is generated from the portal whenever we install the provisioning profile and I phone the device becomes alive for developing the application through x code.

Device registration: Apple provides 100 devices testing for the standard program every I phone as the unique device it is a 40 digit nor you should register this in the portal.

Every application has a unique app ID it is also generated from the portal.

Note:- Distribution of over app to the device can be done through distribution profile, and we should convert over final product app file IPA this over distribution is called ad hoc distribution.